How to make fairy tales out of inspirational stories 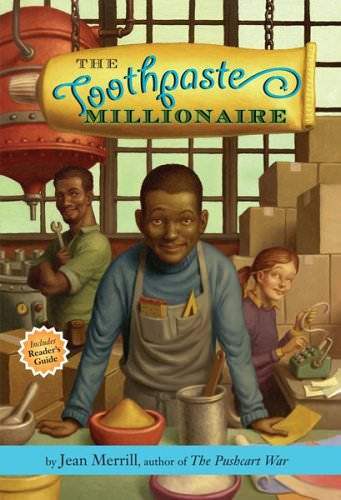 A few months ago I shared the juicy Public-Choice goodness of Jean Merrill’s mid-grade reader The Pushcart War with you. I noted that if more kids read The Pushcart War, “the basic ideas of Public Choice could be as commonly taught as fractions, spelling, and Shakespeare. And that might begin to take the romance out of politics.”

Immediately after writing that column, I ordered another of Merrill’s books: The Toothpaste Millionaire. I expected it would be just as good, and it is. I did not expect it to enrage me. But it did.

The Toothpaste Millionaire is the story of Rufus Mayflower. His friend Kate MacKinstrey narrates the story for us:

"This is the story of my friend Rufus Mayflower and how he got to be a millionaire. With a little help from me. With a lot of help from me, as a matter of fact. But the idea was Rufus’s.

Confronted with sticker shock when he realizes that a tube of toothpaste costs 79 cents (the book is set in the late ‘60s or early ‘70s), Rufus decides to make and sell his own. From that moment, Rufus’s entrepreneurial alertness—and the way that Kate and other kids “catch” that alertness—becomes the book’s focus.

What our decision-maker without means needs to arrive at the best decision is simply to know where these unexploited opportunities exist. All he needs is to discover where buyers have been paying too much and where sellers have been receiving too little and to bridge the gap by offering to buy for a little more and to sell for a little less.

Having found one such gap in the toothpaste industry, Rufus enthusiastically sets out to fill it.

He develops his own formula and begins to make, package, and ship it from his house and then from Kate’s when he needs more space. He hires neighborhood kids to help out. He develops a reputation for straight talk in advertising with the development of the “Absolutely Honest Commercial,” which “simply tells us what’s in Toothpaste and how much it costs.” The kids recycle the addresses from order forms as mailing labels to cut labor and supply costs. Rufus and Kate also become adept at repurposing capital. They buy a dozen gross of toothpaste tubes from a company that went out of business, and eventually they rent an entire abandoned factory and begin to produce their toothpaste from there. They even hire the unemployed Hector—former operator of the toothpaste tube filling machine they rent along with the factory—to operate the machinery and to serve as their front for securing a bank loan.

And that is how Rufus makes a million dollars and retires before the eighth grade.

It is worth noting, as well, that the entrepreneurial spirit never really retires, not for good. The last we hear from Rufus in The Toothpaste Millionaire is a postcard that reads:

Could you see if Vince’s Army & Navy sells blow up rafts at least 6’x12’? And how much would two of them cost And do they have army surplus soup in 100-pound bags?

Rufus’s next million-dollar idea—whatever it might be—is well on its way. (And if I had some 11-year-olds around my house, I’d ask them to imagine what Rufus might be planning to do with those supplies!)

With charm and wit, a great plot, and solid support for free-market entrepreneurship, what could I possibly find in this book to enrage me? Nothing.

Rufus’s story has no health inspectors. No OSHA inspectors. No licenses for the factory. No busybodies interfering with 11-year-olds running a business. There are no unions. There are no taxes. There are no run-ins with government whatsoever. Aside from some brief attempts at price-fixing by other toothpaste manufacturers, and a banker who is somewhat reluctant to loan $15,000 to an 11-year-old, Rufus’s business takes place in a world that is virtually free of negative interference by adults, by government, and by regulation.

Now, I’m well aware that the ‘60s and ‘70s were not, in fact, a magical golden age of minimal regulation and intervention. I’m not mad because I’m longing for that kind of dream world.

I’m mad because when Merrill wrote The Toothpaste Millionaire it must have seemed at least marginally plausible that some clever kids could accomplish this much—without endless interference from the adult world, and without endless stumbling blocks put in the way of small businesspeople. It had to be, at least, plausible enough for 11-year-olds (who are nobody’s fool) to buy it for the sake of the story.

Now that lemonade stands need licenses, dinner parties are threatened with regulation, and independent taxi services need the Institute for Justice to defend them in court, Merrill’s story looks a lot less plausible. We can see the difference as clearly as we can by comparing the weights of the 1972 and 2013 Federal Register. The rise of regulation and interference is so sharp and steep that even my five-year-old would know that The Toothpaste Millionaire, read in 2013, is a fairy tale, not an aspirational tale.

Have we made a world for our kids where The Toothpaste Millionaire and Rufus Mayflower have no place?