This is the Best Reason to Support Tax Havens

People need ways of protecting themselves from greedy government.

The late Mancur Olsen was a very accomplished academic economist who described the unfortunate tendency of vote-seeking governments to behave like “stationary bandits,” seeking to extract the maximum amount of money from taxpayers. 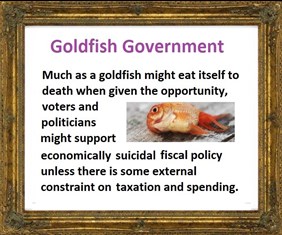 I’m not nearly as sophisticated, so I simply refer to this process as “goldfish government.”

Tax competition is a way of discouraging this self-destructive behavior. Politicians are less likely to over-tax and over-spend if they know that jobs and investment can migrate from high-tax nations to low-tax jurisdictions (borders can be a hassle, but they are beneficial since they presumably represent a limit on the reach of a government’s power).

This is why I’m a big fan of so-called tax havens.

I want politicians to be afraid that the geese with the golden eggs may fly away. This is one of the reasons why “offshore” nations play a very valuable role in the global economy.

But it’s important to realize that there’s also a moral argument for tax havens.

Ask yourself whether you would want the government to have easy access to your nest egg (whether it’s a lot or a little) if you lived in Russia? Or Venezuela? Or China? Or Zimbabwe?

Ask yourself whether you trust the bureaucracy to protect the privacy of your personal financial information if you lived in a country with corruption problems like Mexico? Or India? Or South Africa?

Here’s a story from France24 that underscores my point.

Turkish President Recep Tayyip Erdogan declared Sunday that businessmen who move assets abroad are committing “treason”, adding that his government should put an end to the practice. “I am aware that some businessmen are attempting to place their assets overseas. I call on the government not to authorise any such moves, because these are acts of treason,” Erdogan said in televised comments to party members in the eastern town on Mus.

Allow me to translate. What Erdogan is saying is, “I don’t want escape options for potential victims of expropriation.” For all intents and purposes, he’s basically whining that he can’t steal money that is held offshore.

Which, of course, is why offshore finance is so important.

I’d like to speak up for offshore banking as a significant protection against tyranny and unjust autocracy. It’s not just that many offshore financial institutions, such as hedge funds registered in the Cayman Islands, are entirely legal, but also that the practice of hiding wealth overseas has its upside. …offshore…accounts make it harder for autocratic governments to confiscate resources from their citizens. That in turn limits the potential for tyranny.

Tyler looks at some of the research and unsurprisingly finds that there’s a lot of capital flight from unstable regimes.

A recent study shows which countries are most likely to use offshore banking, as measured by a percentage of their gross domestic product. …The top five countries on this list, measured as a percentage of GDP, are United Arab Emirates, Venezuela, Saudi Arabia, Russia and Argentina, based on estimates from 2007. In all of those cases the risk of arbitrary political confiscations of wealth is relatively high. …When I consider that list of countries, I don’t think confidential offshore banking is such a bad thing. …consider some of the countries that are not major players in the offshore wealth sweepstakes. China and Iran, for instance, have quite low percentages of their GDPs held in offshore accounts, in part because they haven’t been well integrated into global capital markets. …Are we so sure it would be bad for more Chinese and Iranian wealth to find its way into offshore banks? The upshot would be additional limits on the power of the central leaders to confiscate wealth and to keep political opposition in line.

So What’s the Bottom Line?

Simple. People need ways of protecting themselves from greedy government.

From the vantage point of Western liberalism, individuals should be free from arbitrary confiscations of their wealth, connected to threats against their life and liberty, even if those individuals didn’t earn all of that wealth justly or honestly. There is even a “takings clause” built into the U.S. Constitution. On top of these moral issues, such confiscations may scare off foreign investment and slow progress toward the rule of law.

By the way, the moral argument shouldn’t be limited to nations with overtly venal governments that engage in wealth expropriation. What about the rights of people in nations – such as Argentina and Greece – where governments wreck economies because of blind incompetence? Shouldn’t they have the ability to protect themselves from wealth destruction?

I actually raised some of these arguments almost 10 years ago in this video from the Center for Freedom and Prosperity.

P.P.S. Which is why I’m very happy that Rand Paul is leading the fight against a scheme for a global tax cartel.