With open borders, the world GDP would roughly double in size. 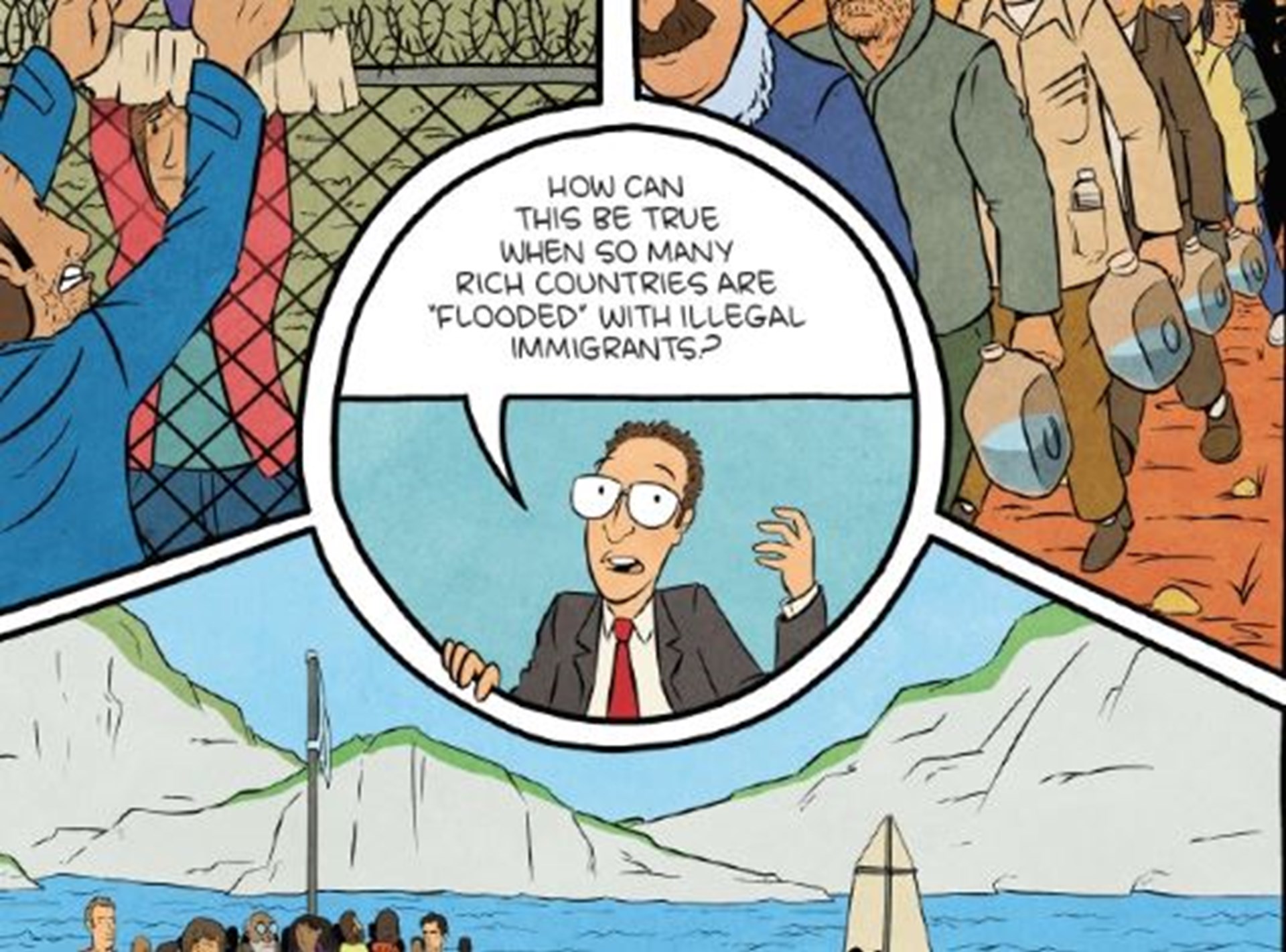 Economists tend to prefer trade to charity. Charity is fickle because it relies on the transient benevolence of donors or politicians. Charity is best thought of as a tourniquet: a valuable option in a pinch but not a long-term solution. To some, charity is even demeaning because it conveys a sense of helpless incompetence. Charity is ultimately a symptom that something’s not working.

Trade is better. When two people trade, they each benefit, and so that interaction is far more reliable than charity. Trade means each side brings something to the societal table. Trade means people are partners, not wards. It’s the difference between giving a man a fish and teaching him to fish.

Open Borders Is a Kind of Trade

What’s true for fishing is true for immigration. So goes the argument of Open Borders: The Ethics and Science of Immigration, the recently released graphic nonfiction book by economist Bryan Caplan and illustrated cartoonist Zach Weinersmith (creator of the popular webcomic Saturday Morning Breakfast Cereal).

People typically think of immigrants as charity: Letting people in is doing them a favor at our expense, akin to letting a friend crash on our couch or giving a man a fish. Not so. Through a combination of lively illustrations (it’s a literal comic book) and detailed analysis (with 30 pages of notes and citations), Caplan makes the compelling case that immigration isn’t really a form of charity at all. Open borders makes it easier to interact with whomever you wish. It’s a form of free trade.

Open Borders Is About Growth

Immigration restrictions mean that some people, by accident of birth, are trapped in oppressive or dysfunctional countries. A full quarter of American immigrants come from Mexico, with sizable populations coming from other parts of Latin America and East Asia. These countries, especially certain parts of those countries, are typically poor and typically unfree. Some are downright oppressive—immigrants brave the trials and tribulations of migration for a reason.

It’s a mistake to think of such individuals as inherently unproductive. They are merely trapped in unproductive countries. Allowing them to escape terrible circumstances that prevent them from realizing their potential empowers them and enriches the receiving country. Caplan cites research from economist Michael Clemens to estimate that world GDP would roughly double with open borders.

Immigration is not charity, it's a positive-sum game with benefits in spades.

It’s important to not understate that finding. Doubling world GDP would be a tectonic shift in global well-being and would liberate the stifled potential of hundreds of millions. Thinking of immigration as merely doing something nice for others means we’re less likely to do it the moment it’s perceived as even mildly problematic. In economics-speak, too many think of immigration as a zero-sum game where the receiver benefits at the giver’s expense. That erroneous belief amplifies the risk of missing out on something amazing.

Imagine you thought foreign trade was an act of charity. You’d buy domestic goods and only “help” foreigners on occasions you happened to feel magnanimous. But once you realize you’re paying a premium for domestic goods, foreign trade no longer looks like charity. You’d have an incentive to regularly trade with foreigners and that regular interaction would enhance their well-being as well as yours.

The Cost of Open Borders Is Tiny

If the benefits of immigration are huge, what are the costs? The costs turn out to be tiny, and the bulk of Open Borders focuses on showing how minuscule the costs to immigration are. It’s hard to imagine a criticism that Caplan doesn’t put to bed.

"Don’t immigrants amount to a fiscal burden for everyone else?"

No. The vast majority of immigrants are working-age adults, and most government payouts go to senior citizens and kids. Even if immigrants use some government benefits when they arrive, an exhaustive 2016 report by the National Academy of Sciences finds that they more than pay for those government services as they age. Open borders is about the most fiscally sound policy America could adopt.

No. Immigrants adopt their new country’s attitudes about trust and politics. First-generation immigrants may learn English slowly, but subsequent generations pick it up as easily as any kid learns a language. When immigrants don’t “assimilate,” it’s because market forces encourage them to share their culture: cuisine, clothes, music, film, dance, and so on. They’re a source of cultural cornucopia that natives love to trade with.

No. Even if new citizens cause average productivity to fall, that doesn’t cause current residents to be poorer. Quite the opposite: These first-generation immigrants will be many times more productive than before they moved, enriching whatever country is lucky enough to have them. Lower IQ rates among new immigrants largely stem from poor nutrition, health, and education in their country of origin. Coming to wealthier countries allows their children to grow smart and to prosper—prosperity the whole country benefits from.

People suffering under oppressive or inept governments have a hard time leaving. Entering the United States legally is virtually impossible, and it’s not much different for other wealthy countries. Entering illegally is dangerous, costs thousands or tens of thousands of dollars, and comes with the risk of deportation. With no easy option to flee, it’s no wonder gangs and corrupt governments in underdeveloped countries feel permitted to terrorize and extort locals.

Oppressors would think differently if people could leave at the cost of a plane ticket. Much like how companies serve customers because customers have the ability to shop elsewhere, governments would improve if citizens could fire them by leaving. Like monopoly power, immigration restrictions invite abuse. Imagine the kind of progress that could be made if billions of people weren’t trapped.

Open borders isn’t just about doing the right thing (though the book also makes a compelling ethical case for more immigration). Caplan and Weinersmith’s graphic nonfiction reminds us that we shouldn’t think of would-be immigrants as people to be pitied and coddled. They are untapped potential, and if they could be freed, they would help make the world a much better place. Similar to other freedom-focused ideas such as license-less work, free trade, and school choice, open borders isn’t just humane policy, it’s smart policy.