The True Victims of the Chicago Riots

Coordinated via social media, a large group of looters converged in downtown Chicago around 1:00 a.m. on Sunday morning and began smashing windows and ransacking storefronts.

The looters initially focused on high-end stores such as Tesla, Louis Vuitton, Gucci, and Coach, as the criminals made their way through Chicago’s “Magnificent Mile” shopping district. But soon enough, the marauding spread to shops like Walgreens and Old Navy. U-Hauls were spotted being loaded with spoils and multiple shootings broke out.

Here’s a sampling of the violence as it played out across social media:

Gunfire rings out on the streets of Chicago during the #BlackLivesMatter riot overnight. Looters scatter the street. #ChicagoRiots pic.twitter.com/RWhCDpvu5N

The outbreak was triggered by yet another police shooting. But this incident wasn’t anything like the police killing of George Floyd, which was decried nearly across the board as an injustice. In this shooting, the suspect had reportedly shot at police first, and is in the hospital, alive. However, false social media rumors inaccurately claimed that police had killed a teenager.

The riots broke out under false pretenses.

The riots in Chicago tonight stem from an “officer involved shooting.” But the guy was armed, threatening neighbors, and shot at police first, according to reports. His weapon was recovered. https://t.co/yqmjHTQbLA

“This is not legitimate First Amendment protected speech,” Chicago Mayor Lori Lightfoot, a Democrat, said. “These were not poor people engaged in petty theft to feed themselves and their family. This was straight up felony criminal conduct."

Some sympathizers have tried to downplay this rioting as “just property destruction.” But vandalism and burglary are violence, as people get hurt in the crossfire and livelihoods are destroyed.

Meanwhile, others try to make excuses for vandalism by claiming the costs mostly fall on mega-corporations like Apple and Tesla. This isn’t true.

“As you see, our whole plaza has been destroyed, set fire to, trash thrown, by what we think are protesters that do not stand for what we stand for—which is Black Lives Matter,” said one local, Terrance Moses, in an impassioned video plea recorded during the chaos.

Terrance Moses, says these are black owned businesses and the destruction from these protestors doesn’t support Black Lives Matter pic.twitter.com/QkOH1FoAxD

“These were black-owned businesses, put together by people of color… and you came down here and destroyed it, and then you tried to use it in the name of Black Lives Matter,” Moses continued. “This won’t solve anything. This is all strictly for your glorification… you come through here and set fire to people’s livelihoods. Stop it now.”

Sympathizers also try to downplay riots with the supposed excuse that “businesses have insurance.” This is misleading, and not a miracle cure for the costs of lawless property destruction.

Yes, big companies like Walmart have sweeping insurance policies that are likely to cover the damage in full. But many small businesses have cheaper insurance plans that do not cover costs sustained during rioting and looting. And even when the damage is covered, it means higher rates for businesses in the future. This means no matter what, rioting results in higher costs for consumers, fewer jobs and lower wages for workers, and other steep costs that will hang over future generations. 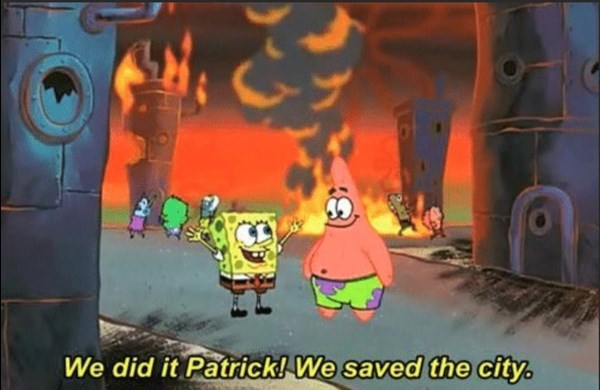 Why? Well, property rights are the foundation of any market economy. As Nobel laureate economist and philosopher Friedrich Hayek once remarked, “The system of private property is the most important guarantee of freedom, not only for those who own property, but scarcely less for those who do not.”

What Hayek meant was that if business owners can’t trust that their property will be protected, ensuring a reasonable expectation of return on their investment, they will take their money somewhere else. A market economy crumbles with insecure property rights, and the ripple effects of widespread violations play out over decades to the detriment of the most vulnerable.

This isn’t speculation—it’s exactly what has happened in the past.

One study of the 1992 Los Angeles riots concluded that not only did the destruction cause $1 billion in initial property damage, over time it led to an economic decline of $3.8 billion in sales activity and at least $125 million in tax revenue.

This time won’t be any different. Now, thanks to the rioting that many so-called “progressives" won’t condemn, Chicago’s urban and minority communities will face the same bleak economic fate. The inevitable flight of investment that follows widespread property destruction means jobs and opportunities near the targeted part of downtown Chicago will dry up over time.

It’s truly a shame. Chicago’s destroyed “Magnificent Mile” served many black customers, employed many black workers, and lifted the prospects of all members of the community—yet now it's in ruins. Commerce is community service, and an assault on property rights is an assault on us all.