The Student Debt Crisis Is the Predictable Consequence of Subsidies

You didn't need a degree to see it coming.

Normally, leftists get upset if there’s a big industry that charges high prices, engages in lots of featherbedding, and manipulates the political system for handouts.

But for some reason, when the industry is higher education, folks like Hillary Clinton think the answer is to shower colleges and universities with ever-greater subsidies.

She says the subsidies are for students, but I point out in this interview that the real beneficiaries are the schools that simply boost tuition and fees to capture any increase in student loans.

And I also pointed out that the colleges and universities don’t even use the money wisely. 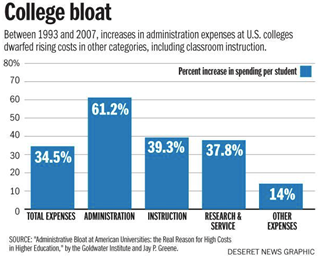 Instead, they build bureaucratic empires with ever-larger numbers of administrators while money devoted to the classroom shrinks.

Sort of a pay-more-get-less business model.

Though that only works when there are government subsidies to enable the inefficiency and bloat.

But don’t take my word for it. According to a study published by the National Bureau of Economic Research (h/t: James Pethokoukis), tuition subsidies get captured by colleges and universities.

With all factors present, net tuition increases from $6,100 to $12,559 [and] the demand shocks — which consist mostly of changes in financial aid — account for the lion’s share of the higher tuition. …These results accord strongly with the Bennett hypothesis, which asserts that colleges respond to expansions of financial aid by increasing tuition. In fact, the tuition response completely crowds out any additional enrollment that the financial aid expansion would otherwise induce, resulting instead in an enrollment decline… Furthermore, the students who do enroll take out $6,876 in loans compared to $4,663 in the initial steady state. The college, in turn, uses these funds to finance an increase of investment expenditures from $21,550 to $27,338… Lastly, the model predicts that demand shocks in isolation generate a surge in the default rate from 17% to 32%. Essentially, demand shocks lead to higher college costs and more debt, and in the absence of higher labor market returns, more loan default inevitably occurs. …Our model also suggests that financial aid increases tuition at the bottom of the tuition distribution more so than it does at the top.

By the way, I closed the above interview by stating that I want to make colleges and universities at least partially liable if students don’t pay back their loans because that will create a better incentive structure.

Two scholars from the American Enterprise Institute addressed this issue in an article for National Review.

Just as government-subsidized easy money fueled a real-estate bubble in the 1990s and 2000s, boosting house prices while promoting unwise borrowing and lending, today government-subsidized easy money is fueling an education bubble — boosting tuition rates and reducing students’ incentives to choose education options smartly. …Like the brokers who caused the subprime-mortgage crisis, colleges push naïve students to take on debt regardless of their ability to repay, because colleges bear no cost when graduates default. A true solution requires a new financing system where colleges retain “skin in the game.”

The authors point out that default and delinquency are very common, but they point out that this is merely a symptom of a system with screwed-up incentives.

The high delinquency rate is a symptom of a wider problem — a broken higher-education system. Colleges are paid tuition regardless of whether their alumni succeed. They face little incentive to control costs when those costs can be passed on to students who fund them with government-guaranteed loans that are available regardless of the students’ ability to repay.

It’s not just whether they have an incentive to control costs. The current approach gives them carte blanche to waste money and jack up tuition and fees.

Between 1975 and 2015, the real cost of attending a private college increased by 171 percent while the real cost of public universities rose by 150 percent. If the tuition, room and board, and other fees at a four-year private college in 1975 were projected forward to 2015, adjusting for the average inflation rate, the cost of college in 2015 would have been $16,213. Instead, the actual cost in 2015 was $43,921. A large share of rising college costs can be attributed to expanded administration, new non-educational services, athletic programs, and government regulation. Colleges have economized by switching to part-time adjunct faculty. The American Association of University Professors estimates that roughly 3 out of 4 college courses are taught by adjuncts.

Amen. This is what I mean by the pay-more-get-less business model.

The solution, of course, it to make fat and lazy college administrators have to worry that their budgets will shrink if they continue to jack up tuition while providing sub-par education.

The key to controlling costs and student-debt burdens is to require colleges themselves to have “skin in the game” so they have strong incentives not only to provide a good education, but also to safeguard the financial solvency of their graduates. …With “skin in the game,” colleges will face pressure to control unnecessary costs and limit student indebtedness. Colleges will redouble their efforts to ensure that students graduate with the skills necessary to succeed in the job market. Resources will no longer be freely available for unnecessary non-educational university spending.

The bottom line is that bad things happen when the visible foot of the government supplants the invisible hand of the market. 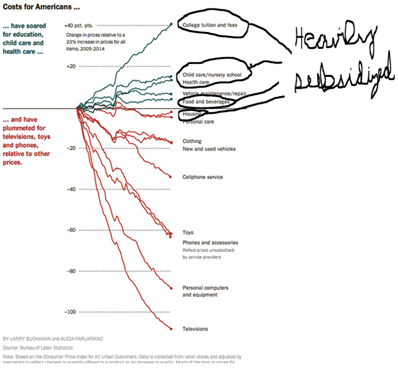 That’s what I basically was trying to say in the interview when I made the crack about a reverse Midas touch whenever there is government intervention.

The solution, of course, is to phase out the subsidies that have created the problem.

But (just as is the case with healthcare) that’s a challenge because of the inefficiency that is now built into the system. Consumers will be worried that tuition and fees will remain high, which will mean higher out-of-pockets costs for college.

So while I understand why politicians will be reluctant to address the issue, the longer they wait, the worse the problem will become.

P.S. This video from Learn Liberty, featuring Professor Daniel Lin, is a great (albeit depressing) introduction to the issue of how government handouts lead to higher tuition.

P.P.S. Is there a “bubble” in higher education? While government intervention and handouts definitely have enabled needlessly high tuition, I’ve explained that those high prices will probably be permanent so long as the subsidies continue.