The Source of America's Divisiveness Isn't What You Think

It's not the usual suspects of race, gender, religion, or socio-economic status causing hostilities.

Pundits today are fond of saying that Americans are divided because of a broad slate of reasons, race, and gender being two primary ones.

But according to a new Pew survey, these reasons may not be dividing America nearly as much as we’ve been led to believe. In fact, it appears that political party may hold a good share of the blame on that front. As Pew explains, the differences between Republicans and Democrats on various hot-button issues have widened from 15 points to 36 points in the last two decades. By contrast, division due to race, religion, age, and gender has remained fairly stable, a fact shown in the chart below: 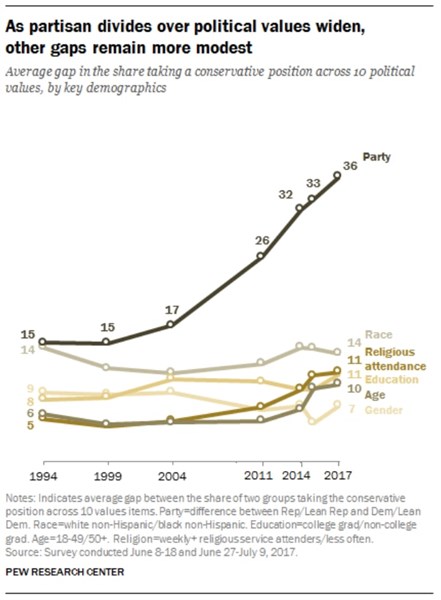 This is rather surprising, particularly since it runs counter to the narrative given out in the news media.

But it shouldn’t be surprising to students of history, for America’s foremost founder once gave a very sharp warning regarding this issue.

In his Farewell Address, George Washington cautioned Americans against forming factions and giving way to the party spirit. The reason he gave this caution was due to the negative effects which the partisan spirit kindles in society:

“[I]t serves always to distract the public councils and enfeeble the public administration. It agitates the community with ill-founded jealousies and false alarms, kindles the animosity of one part against another, foments occasionally riot and insurrection. It opens the door to foreign influence and corruption, which finds a facilitated access to the government itself through the channels of party passions. Thus the policy and the will of one country are subjected to the policy and will of another.”

I’m not sure about you, but if ill-founded jealousies, false alarms, intensified animosity, riot, and insurrection don’t sound like what America is experiencing today, I’m not sure what does.

The fact is, we’ve been told that this unrest is the fault of inequities which persist in our country. But is the unrest in effect the fault of our intensified loyalty to a political party, which often indicates an unwillingness to listen to opposing viewpoints and ideas?

If so, we need to be careful about continuing to foster such attitudes, for as Washington also notes in his Farewell Address, the intensified party spirit only leads to misery under a despotic government and a dictatorial, self-serving leader.

If we want to avoid such a state, do we need to stop placing the blame for our current woes on race, class, and gender, and instead re-examine our partisan loyalties?