Social Security is a rotten deal for workers.

If you did man-on-the-street interviews across America and asked people about Social Security, I suspect most of them would have some degree of understanding about the program’s looming fiscal crisis. 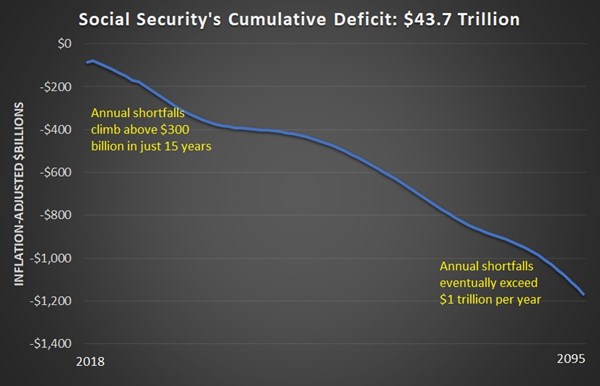 Since they’re not policy wonks, they presumably wouldn’t know the magnitude of the problem (not that I blame them since I once underestimated the shortfall by $16 trillion).

I also doubt many of them would be able to explain why the so-called Trust Fund is an accounting fiction, which is understandable since even supposedly knowledgeable people pretend IOUs are real assets.

But at least they know the program’s finances are a giant mess and that we face a fiscal crisis.

That being said, there’s a second crisis in the program that doesn’t get nearly as much attention. Simply stated, the program is a rotten deal for workers.

I explained both crises in this video I narrated for the Center for Freedom and Prosperity.

Today, thanks to a new report from the Heritage Foundation, we have a great opportunity to peruse up-to-date numbers on the second Social Security crisis.

With Social Security consuming such a large component of workers’ paychecks and offsetting their own private savings, it is important that workers receive a valuable benefit from Social Security—one at least as good as they, as a whole, could obtain from saving on their own. This analysis looks across the United States and across generations to see if Social Security does in fact provide that.

Sadly, Social Security does a crummy job of giving workers a decent amount of retirement income.

Taking an average of all 50 states and the District of Columbia, the average worker receives significantly less from Social Security than he would have if he had conservatively invested his Social Security payroll taxes in the market. …Individuals with lower life expectancies often lose greatly. This occurs because they receive little or nothing in benefits and cannot pass along all their lost contributions to their surviving family members. …Younger workers face lower, and even negative, returns from Social Security compared to older workers. This comes as a result of paying higher average Social Security tax rates over their lifetimes, coupled with a two-year increase in Social Security’s normal retirement age—as well as the benefit cuts that will occur.

The bottom line is that the implicit rate of return from Social Security is very inadequate compared to the genuine rate of return that could be obtained if workers could invest their payroll taxes in personal retirement accounts.

Here’s the key table from the Heritage study, showing rates of return for today’s young workers based on how long they live. 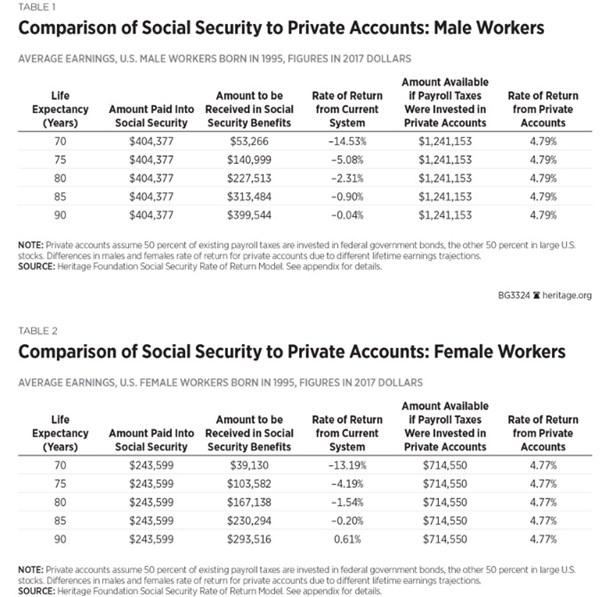 You have to wonder why so many young people are intrigued by socialism when they’re the ones getting screwed by big government!

Anyhow, there are 12 tables in the report showing lots of additional data, including breakdowns based by state. The entire study is worth a look.

But for those short on time, the conclusion is a very clear summary of why we need to fix Social Security’s rate-of-return crisis as well as the program’s fiscal crisis.

The results are overwhelmingly clear. Americans would be better off keeping their payroll tax contributions and saving them in private retirement accounts than having to sacrifice them to the government’s broken Social Security system. Social Security’s design has, over the decades, presumed that many Americans are too incompetent to make informed decisions for themselves, but few Americans believe that the government knows better than they do what is best for them and their families. Moreover, Social Security’s financial structure effectively guarantees that workers will receive extremely low, or even negative, returns on their payroll taxes.

P.S. Fixing Social Security is simple, but it won’t be easy. Benefits would have to be preserved for current retirees and older workers, so there would be a “transition cost” as we shift to a “funded” system of personal accounts.

P.P.P.S. Our friends on the left have a solution—albeit misguided—for Social Security’s fiscal crisis. But their approach would greatly worsen the rate-of-return crisis.