The ROI for Cronyism is Huge

One of the points I repeatedly make is that big government breeds corruption for the simple reason that politicians have more power to reward friends and punish enemies. 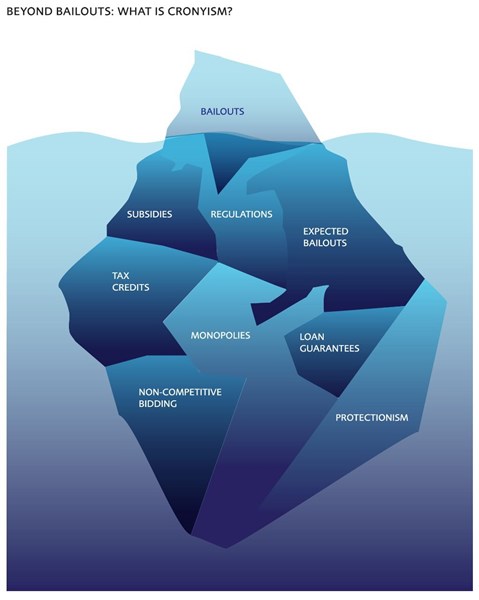 It’s especially nauseating when big companies learn that they can get in bed with big government in order to obtain unearned wealth with bailouts, subsidies, protectionism, and other examples of cronyism.

And these odious forms of government intervention reduce our living standards by distorting the allocation of labor and capital.

But just as crime is bad for society but good for criminals, it’s also true that cronyism is bad for the economy and good for cronies.

It Pays to Play

Two professors at the University of the Illinois decided to measure the “value” of cronyism for politically connected companies.

Gaining political access can be of significant value for corporations, particularly since governments play an increasingly prominent role in influencing firms. Governments affect economic activities not only through regulations, but also by playing the role of customers, financiers, and partners of firms in the private sector.

…Therefore, gaining and maintaining access to influential policymakers can be an important source of competitive advantage… In this paper, we investigate the characteristics of firms with political access as well as the valuation effects of political access for corporations. Using a novel dataset of White House visitor logs, we identify top corporate executives of S&P 1500 firms that have face-to-face meetings with high-level federal government officials.

And what did they find?

That cronyism is lucrative (I deliberately chose that word rather than “profitable” because money that it legitimately earned is very honorable).

Here are some of the findings.

…we find that firms that contributed more to Obama’s presidential election campaigns are more likely to have access to the White House. We also find that firms that spend more on lobbying receive more government contracts… Second, we find that corporate executives’ meetings with White House officials are followed by significant positive cumulative abnormal returns (CARs). For example, the CAR is about 0.865% during a 51-day window surrounding the meetings (i.e., 10 days before to 40 days after the meetings). We also find that the result is driven mainly by meetings with the President and his top aides.”

For those interested, here are the companies that had a lot of interaction with the Obama White House. 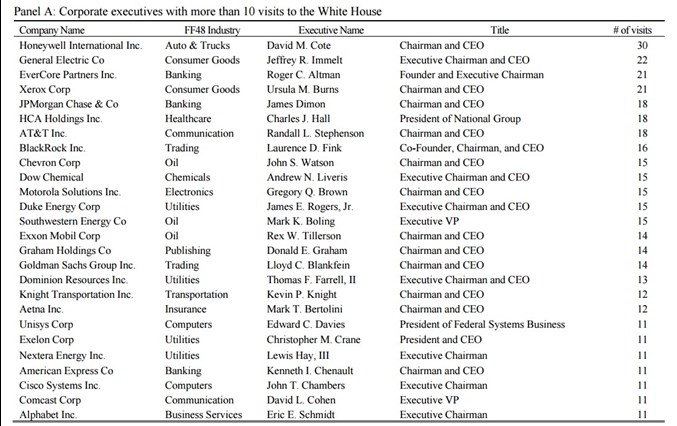 And here are the officials that they met with.

For what it’s worth, I would be especially suspicious of the meetings with Valerie Jarrett and the three Chiefs of Staff. Those officials are political operatives rather than policy experts, so companies meeting with them were probably looking for favors.

Interestingly, it turns out that it wasn’t a good idea for companies to “invest” a lot of time and effort into cultivating relationships with Democrats.

…we exploit the election of Donald J. Trump as the 45th President of the U.S. as a shock to political access. We find that firms with access to the Obama administration experience significantly lower stock returns following the release of the election result than otherwise similar firms. The economic magnitude is nontrivial as well: after controlling for various factors that are likely correlated with firms’ political activities, such as campaign contributions, lobbying expenses, and government contracts, the stocks of firms with access to the Obama administration underperform the stocks of otherwise similar firms by about 80 basis points in the three days immediately following the election.

Though I guess you can’t blame the companies. Most observers (including me) expected Hillary to win, so the firms were simply playing the odds (albeit from an amoral perspective).

By the way, there are two very important caveats to share.

For what it’s worth, I fear Trump will be tempted to play favorites as well. Which is why the real message for today is that smaller government is the only way to limit the corrupt interaction of big business and big government.

This image from the libertarian page on Reddit illustrates why my leftist buddies are naive to think that a bigger government will be a weapon against cronyism. 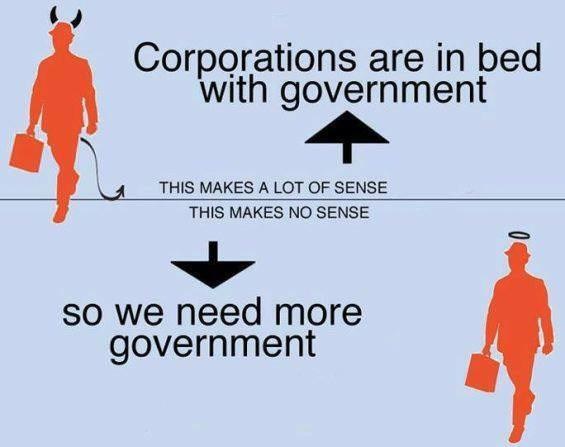 P.S. We should learn from Estonia on how to limit cronyism.

P.P.S. To close on a humorous note, those with left-wing children may want to get them “Kronies” for their birthdays or Christmas.