The Rise of a Nanny State "Nudger"

Alemanno is pushing the image of the defenseless consumer, subjugated by large companies into buying things he or she has no use for.

It's an average morning in the European Parliament in Brussels, the center of power for the European Union. Avalanches of lawmakers, policy advisors, and lobbyists trickle through the immense doors at the Place de Luxembourg, filling the chamber’s committee rooms with discussions over new laws and regulations. At the cafeteria of the parliament's Northern aisle, Brussels' most powerful lobbyist is meeting a Member of the European Parliament.

Alberto Alemanno is an Italian public interest lawyer, author, and activist who has made a name for himself in the EU's capital. He co-founded The Good Lobby – an NGO pretending to lobby for the interest of everyday people – and specializes in risk regulation, public health, consumer rights, and food policy. Alemanno is an advocate of nudge theory, the basic premise of which does not rely on forcing people in the immediate effect to follow one behavioral pattern or another, but to enact surrounding policies which will indirectly push consumers into conducting themselves in certain ways. In one paper on “healthy lifestyles,” which Alemanno co-authored, the goals of nudging policies is described as such:

Inspired by “libertarian paternalism,” it suggests that the goal of public policies should be to steer citizens towards making positive decisions as individuals and for society while preserving individual choice.

A practical example of Alemanno's nudging is his repeated advocacy for plain packaging of cigarettes. In early 2010, long before the legislative introduction of plain packaging in France and the United Kingdom, the Italian activist penned “The Case for Plain Packaging” in the European Journal of Risk Regulation, with an underlying tone showing clear support for the measure. However, even Alemanno warned against the legal problem of “not establishing a causal link between the measure and the protection of the specific public interest,” something France and the UK have consciously ignored. This has and will lead to multiple lawsuits by the tobacco industry, as has been the case for the latest EU Tobacco Directive, which also increased the size of warning labels on packs of cigarettes.

Alemanno is pushing the image of the defenseless consumer, subjugated by large companies into buying things he or she has no use for. In a TEDx Talk in Paris in 2015, he displayed his view on “the unconscious elements of decision-making and their implications for policy” and explained that every decision we make is highly influenced by the state of default and the social pressure we are victims to. His conclusion: policy-makers need to protect consumers the shark-like behavior of data-gathering firms.

The reality, of course, is very different. It'd be foolish not to quote Ludwig von Mises on this matter (excerpt from Human Action, chapter 15):

It is a widespread fallacy that skillful advertising can talk the consumers into buying everything that the advertiser wants them to buy. [...] If this were true, success or failure in business would depend on the mode of advertising only. However, nobody believes that any kind of advertising would have succeeded in making the candle makers hold the field against the electric bulb, the horse drivers against the motorcars, the goose quill against the steel pen and later against the fountain pen. But whoever admits this implies that the quality of the commodity advertised is instrumental in bringing about the success of an advertising campaign. Then there is no reason to maintain that advertising is a method of cheating the gullible public.

Alemanno's "Good Lobby" is signed up in the EU's lobbying register (even though it currently operating with no budget whatsoever) and he is no stranger to the EU's institutions as an individual either: Alemanno advises the European Commission, the European Parliament, the Organization for Economic Cooperation and Development (OECD), and the World Health Organization (WHO) on various aspects of European Union law, international regulatory co-operation, international trade, and global health law.

His policy advocacy is demonstrably effective: more and more EU countries, and the Union as such, are cracking down on lifestyle choices and regulating companies' ability to market their products. His paper on the revision of the EU's Tobacco Products Directive, published in 2012, is the precise handbook of what the union implemented this year. Once Alemanno finishes with tobacco, it is hard to imagine that he will abstain from advocating regulation in other industries as well, such as the food industry. 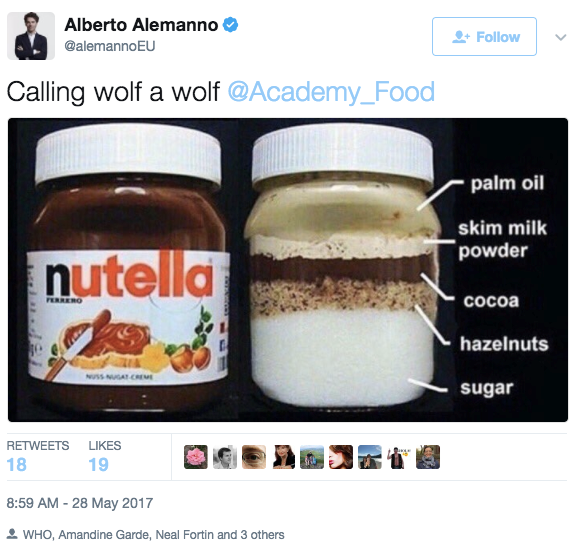 There comes a point when citizens of the European Union will no longer put up with this blatant nanny policy.

The mere fact that Alemanno's own blog describes him as “a charismatic and sought-after public speaker” says enough about how Brussels’s eurocrats are intrinsically full of themselves. Having the temerity to pretend the rules are bottom-up initiatives which favor consumers takes the cake.