The United States Postal Service on Friday reported a net loss of nearly $2.3 billion for the third quarter of fiscal year 2019, putting it on pace to lose nearly $8 billion in 2019.

The United States Postal Service on Friday reported total revenue of just over $17 billion for the third quarter of fiscal year 2019. Total operating expenses came in at $19.3 billion.

In that year, the Post Office defaulted on two payments totaling $11.1 billion, prompting Postmaster General Patrick Donahoe to call on members of Congress to pass comprehensive legislation to put the USPS on sounder financial footing. 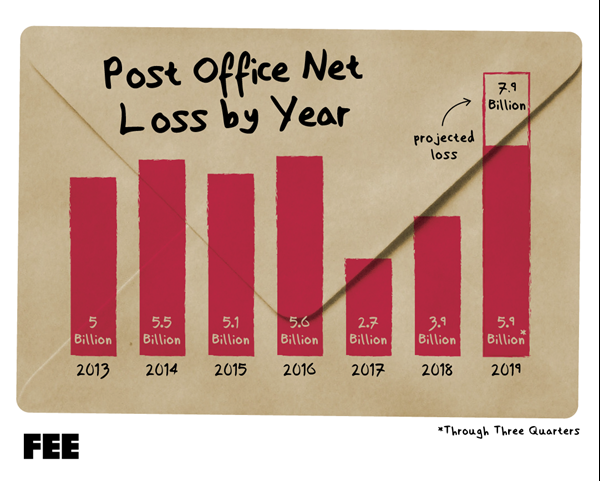 The Post Office, like any organization, has faced its share of obstacles. These include falling demand for mail delivery, high employee costs, and surging benefits. Its most popular product, first-class mail, has plunged 45 percent since 2000.

Yet, the Post Office also has advantages, as Chris Edwards of the Cato Institute has pointed out. It has a legal monopoly and, as a government entity, pays no taxes. (FedEx, on the other hand, paid more than $10 billion in taxes between fiscal years 2013 - 2017.)

The truth is, the Post Office’s operating expenses are out of control, and it can’t compete with its private competitors in package delivery.

Last year, a Trump administration task force concluded that the business model “is unsustainable and must be fundamentally changed if the USPS is to avoid a financial collapse and a taxpayer-funded bailout.”

“Privatization would give the USPS the flexibility to save itself, allowing access to debt and equity markets for capital investment—a lifeline for a company that has long been short of cash and deferring the purchase of vital new vehicles and technologies,” Edwards said.

In the absence of such reform, expect the Post Office to keep racking up the losses.