There's more to one's political position than just the left-right spectrum, but is this particular test accurate?

I’ve taken several tests and quizzes on political philosophy. Not surprisingly, I usually wind up being some type of libertarian.

But sometimes I get odd results. For instance, the Political Left/Right Test put me exactly in the middle, and another political quiz pegged me as a “moderate.”

The former might be reasonable since libertarians have some right-wing views and some left-wing views. But the latter quiz concluded that I had “few strong opinions,” which is a nonsensical result.

Anyhow, I found another test. This new survey is called the Political Compass Test, and it’s based on the theory that the traditional left-right economic spectrum is insufficient.

…the social dimension is also important in politics. That’s the one that the mere left-right scale doesn’t adequately address. So we’ve added one, ranging in positions from extreme authoritarian to extreme libertarian."

And here’s the four quadrants that are created by their two lines. 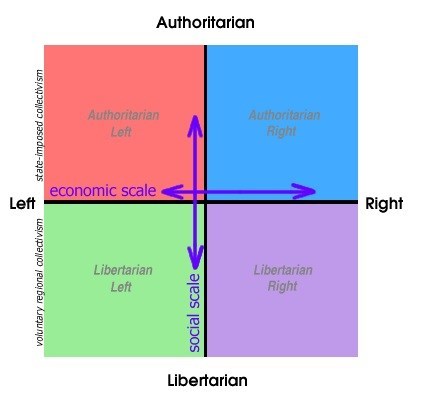 While no system will capture everything, I have no objection to their theoretical construct.

But I think two of the examples they provide are somewhat crazy.

First, Hitler was the head of the National Socialist Workers Party and he belongs on the left side of the horizontal axis. Second, it’s absurd to have Thatcher anywhere near Stalin and Hitler on the vertical axis. 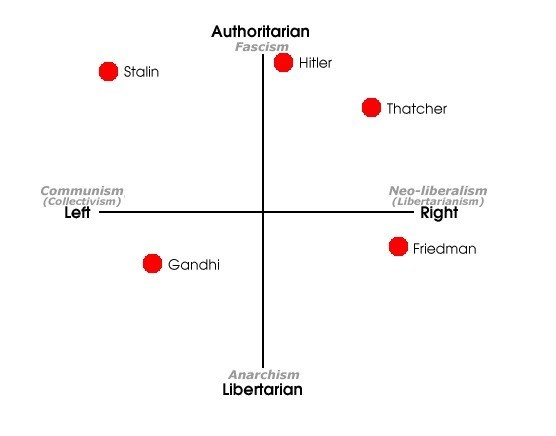 I also think Friedman should be moved more in the libertarian direction, but at least they have him in the correct quadrant.

Now let’s look at my results. I’m somewhat disappointed because I’m not way on the right for economic issues. And I’m even more irked that I’m barely on the libertarian side for social issues. 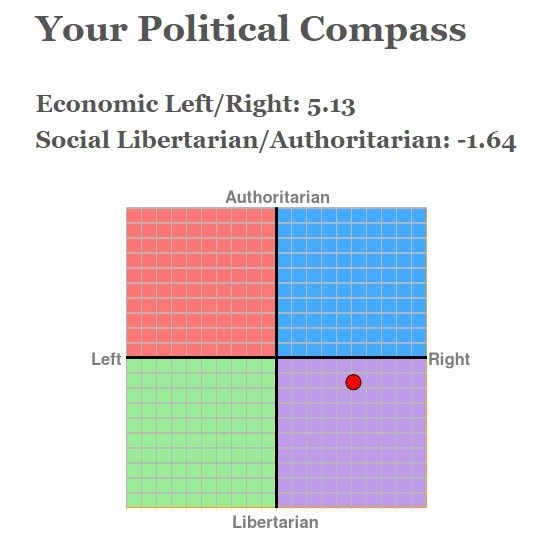 For what it’s worth, some of the questions were more about attitude and outlook rather than policy. And since I’m the boring kind of libertarian, perhaps that’s why I don’t get a strong score.

Let’s close by looking at my score compared to various famous people. I’m closest to Gary Johnson, which strikes me as a reasonable result. 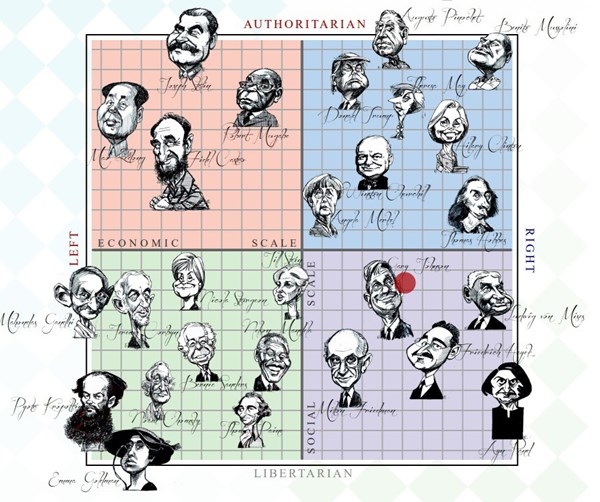 But some of the other results are very bizarre. First of all, Milton Friedman magically moved. Now he’s very libertarian on social issues, but squishy on economics. Needless to say, that’s nonsense.

But not nearly as nonsensical as Benito Mussolini being on the far right for economic policy. That’s crazy. He was a strident opponent of capitalism.

Likewise, they have Hillary Clinton on the right side of the spectrum for economic policy. The person who did that must have been on some crazy drugs at the time.

And I’m not a Trump fan, but I think it’s laughable to have him ranked as more authoritarian than Mugabe, Mao, and Castro.