The Pernicious Impact of Government Intervention in Healthcare, Captured in a Chart

America’s healthcare system is a mess, largely because government intervention (Medicare, Medicaid, Obamacare, and the tax code’s healthcare exclusion) have produced a system where consumers almost never directly pay for their medical services. 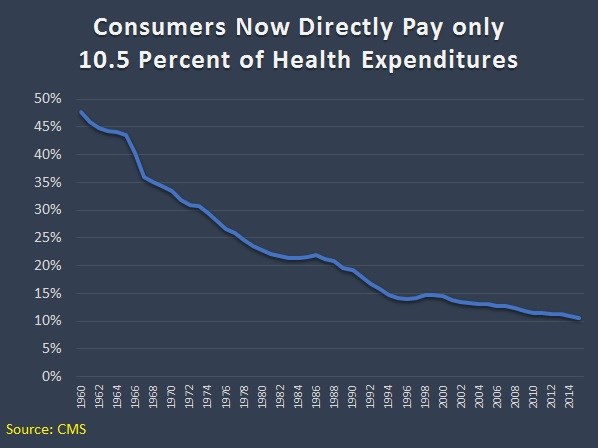 This “third-party payer” system basically means market forces are absent. Consumers have very little reason to focus on cost, after all, if taxpayers or insurance companies are picking up the tab for nearly 90 percent of expenses.

As a result, we get ever-higher prices.

But we also get a lot of featherbedding and inefficiency because providers want to take advantage of this system.

Athenahealth offered some sobering analysis on the system last year.

The number of physicians in the United States grew 150 percent between 1975 and 2010, roughly in keeping with population growth, while the number of healthcare administrators increased 3,200 percent for the same time period. Yes, that’s 3,200 percent in 35 years…the growing number of administrators is…driven by…ever-more-complex regulations. (To cite just a few industry-disrupting regulations, consider the Prospective Payment System of 1983; the Health Insurance Portability & Accountability Act of 1996; and the Health Information Technology for Economic and Clinical Act of 2009.) Critics say the army of administrators does little to relieve the documentation burden on clinicians, while creating layers of high-salaried bureaucratic bloat in healthcare organizations.

And here’s the chart that succinctly captures so much of what is wrong with America’s government-distorted healthcare regime. 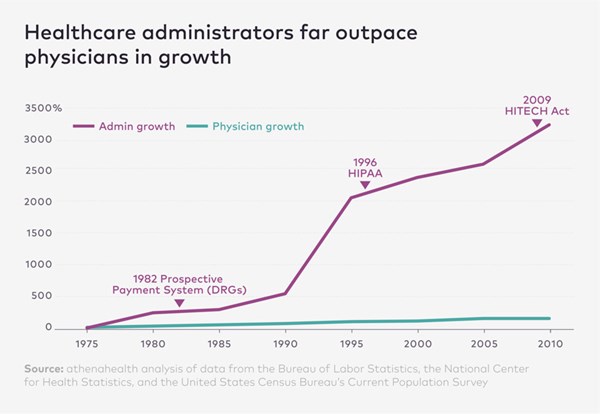 By the way, the chart implies that the rising number of administrators is driven by additional regulations from Washington. I certainly won’t disagree with the notion that more red tape is counterproductive, but I suspect that third-party payer is the primary cause of the problem.

Third-party payer is what causes prices to climb, and then the government and insurance companies respond with various cost-control measures that require lots of paperwork and monitoring. Hence, more administrators.

In other words, third-party payer is the problem and regulations and administrators are both symptoms.

I’ll close by noting that I shared a version of this chart last year and warned that the numbers might be exaggerated. But there’s no question about the trend of more bureaucracy, red tape, and inefficiency.

P.S. Because it’s so important to fix the third-party payer problem, I’ve actually defended one small provision of Obamacare.