Reminder: the OECD’s statist agenda is financed by your tax dollars.

If there was a ranking of international bureaucracies, the World Bank would be my favorite (or, to be more accurate, least unfavorite). Yes, it sometimes produces bad studies, but it also is the source of good research on topics such as government spending, Social Security reform, tax complexity, financial regulation, and economic liberty. 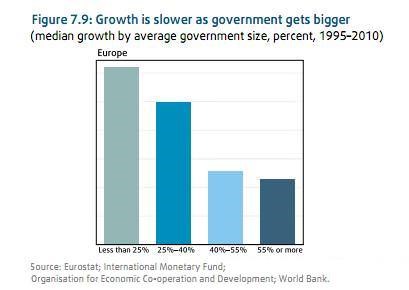 And the rankings in Doing Business are a very helpful way of measuring and comparing regulatory burdens (which is why leftists are so hostile to the project). Moreover, it’s hard to dislike an organization that has a mission of fighting poverty (even if it sometimes thinks redistribution is the right strategy).

The United Nations would be next on the list. The good news is that it has many well-meaning people. The bad news is that is has some very misguided projects. But since it isn’t very effective, I confess that it doesn’t command much of my attention.

At the bottom would be either the International Monetary Fund (IMF) or the Organization for Economic Cooperation and Development (OECD).

The IMF is notorious for supporting bailouts and advocating tax increases. Depending on my mood, it’s either the “Dr. Kevorkian of economic policy” or the “dumpster fire of the global economy.” Yes, I try to be fair and will acknowledge occasional good research 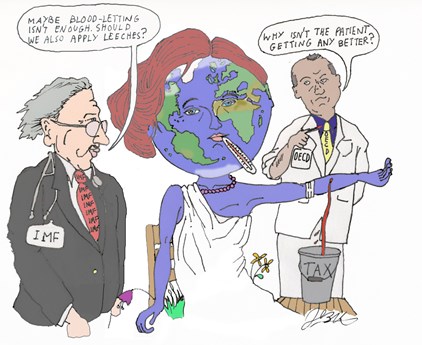 (on taxation, government spending, financial regulation, spending caps, etc), but there’s no question that the net impact of the IMF is negative.

The OECD also is on the wrong side when looking at the big picture. Once again, I’ll admit that there are occasional good studies (on spending caps, tax policy, government spending, etc). But those glimmers of good news are overwhelmed by a statist agenda on a wide range of policies. Most recently, the Paris-based bureaucracy proposed more taxes and more spending for the American economy. And if you’re interested in other examples, I’ve attached a list of examples at the bottom of this column.

But the main purpose of this column is to review a new publication from the OECD. As part of its so-called “Bridging the Gap” project, the bureaucrats in Paris just issued a new report that reads as if it was taken from the campaign speeches of Bernie Sanders and Jeremy Corbyn.

Here are some of the lowlights, starting with a misguided fixation on inequality.

Fiscal redistribution through taxes and transfers plays a crucial role in containing the impact of market income inequality on disposable income… Policies aimed at promoting growth should consider how growth will have an impact on many other outcomes, and how to ensure that those policies avoid the “grow first, distribute later” assumption that has characterised the economic paradigm until recently. It is now clear that growth strategies need to consider from the outset the way in which their benefits will be distributed to different income groups. … Inequalities tear at the fabric of our societies. Inequality of incomes translates seamlessly into inequality of opportunities for children, including education, health and jobs, and lower future prospects to flourish individually and collectively. …inequalities are reaching a tipping point.

I’m tempted to joke that the bureaucrats want a “distribute first, grow never” approach, but let’s focus on the fact that the real goal should be reducing poverty rather than reducing inequality. 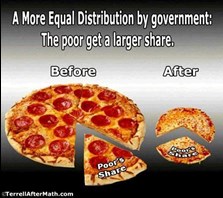 If I’m poor, I want an opportunity to increase my income. And if there’s a policy that will help give me that opportunity, it doesn’t matter if that policy enables Bill Gates to increase his income at a faster rate.

That’s why there’s no substitute for economic growth if you really want to help the less fortunate.

But the not-so-subtle message of the OECD report is that poor people are poor because rich people are rich. The bureaucrats are concerned with how to re-slice the pie rather than how to expand the size of the pie.

The really troubling material is in the final chapter, but I can’t resist commenting on a few items that appeared earlier in the report.

Such as the fact that the bureaucrats were not happy when unemployment benefits in the United States were curtailed.

…redistribution helped cushion increases in market income inequality, but its role has since tended to fall in a majority of OECD countries in the most recent years…it reflects the phasing out of fiscal stimulus, as in the United States, where the extension of unemployment benefit duration carried out in 2008-09 was rolled back in 2011.

Too bad nobody told the authors that the job market improved in America when subsidies for joblessness were cut back.

But that kind of mistake is predictable since the OECD puts such a high value on coercive redistribution.

I’m also not surprised that the bureaucrats are upset that tax competition has resulted in lower tax rates.

Globalisation has increased the difficulty for governments in taxing mobile capital income. Increased levels of capital mobility have led to certain reductions in statutory income tax rates…, which has reduced the progressivity of tax systems… The distributional effects of these reductions in statutory tax rates, especially the reduction in top personal income tax rates, has been a contributing factor to the rise in inequalities.

And the OECD even regurgitated its bizarre hypothesis that inequality reduces growth.

Widespread increases in income inequality are a source of concern…for their potential impact on economic performance. …recent OECD work estimates that rising inequality between 1985 and 2005 might have contributed to knocking more than 4 percentage points off growth between 1990-2010.

The final chapter, though, is where the OECD unveils its Bernie Sanders/Jeremy Corbyn agenda. I guess young people might say that the bureaucrats were “letting their statism freak flag fly.”

Governments have a vital role to play…targeted social investment, redistributive fiscal policy and comprehensive labour market support…fiscal policy is the key mechanism for redistributing market incomes and it is important that it is set up to prioritise support for vulnerable population groups at all points in the economic cycle.

And what are some of these policies?

The OECD wants to expand the welfare state, even though such policies already have caused fiscal crises in many nations.

The size of means-tested programmes is relatively small in many countries and there is room for expansion, by either making those programmes more generous or by extending their coverage.

The bureaucrats also want more double taxation on income that is saved and invested.

…enhancing tax progressivity via savings tax reform. Income from savings is taxed progressively, though at lower rates than labour and with a lot of variation in taxation across asset types. …There is therefore scope to increase the fairness and the neutrality of the taxation of capital income…removing tax expenditures…strengthening progressivity of tax bases. …tax expenditures such as tax deductions for private pension contributions…are regressive since higher income taxpayers tend to save… Removing such tax expenditures could simultaneously reduce inequality and make the tax system more efficient.

Increased taxation of residential property could increase both growth and strengthen progressivity. …if designed well can fall mostly on high-wealth, high-income households.

Amazingly, the OECD even wants more onerous death taxes, even though such policies have a very negative impact on capital formation.

Strengthening inheritance and gift taxes can support inclusive growth. … Inheritance taxes can…help achieve intergenerational equity goals. …In order to be effective, inheritance taxes must also be combined with taxes on gifts and wealth transfers during the taxpayers’ lifetime, as well as with measures to address avoidance and evasion.

Sufficiently generous unemployment benefits and social-assistance systems with a wide coverage are also a key.

And they even endorse an idea that is so economically absurd that it was rejected by President Obama’s main economic adviser.

Promoting gender equality in access to employment and job quality is a key component of inclusive growth. …gender pay gaps remaining at about 15% across the OECD, on average, with little change in recent years.

Compensatory policies that redistribute income also have a role to play in…lowering post-redistribution inequality. …strong and well-designed social safety nets programmes are all the more needed.

And here’s a specific policy for more housing subsidies.

Access to affordable housing is a challenge for inclusion, and solutions include not only better housing policies but also better urban planning and governance of land use. …Explicit policies to support access to housing include housing allowances, social housing arrangements and different kinds of financial support towards homeownership.

As you can see, that’s an impressive collection of statist policies, even for the OECD.

P.S. I wrote last year that some folks on the left enjoy very lavish incomes while crusading about inequality. The same is true of the OECD, where bureaucrats not only are lavishly compensated (a general rule for international organizations), but they also enjoy tax-free incomes while urging higher taxes on the rest of us.

P.P.S. Here are additional examples of very dodgy research from the OECD. 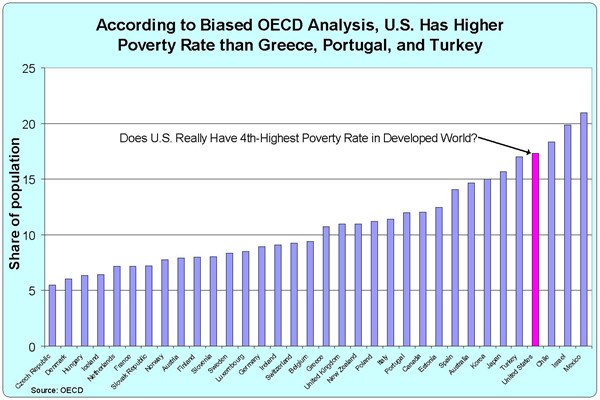 P.P.P.S. Don’t forget that the OECD’s statist agenda is financed by your tax dollars.