The Little Crypto that Could

Is it possible to develop a heartfelt and deep affection for a string of 1s and 0s? This is how I feel about Bitcoin right now. I’m just so proud of this little tool, an implausible techno-monetary creation that, only 6 years ago, just a handful of people believed could work. Today, it is emerging as a safe haven currency for the entire world.

If that reality doesn’t make a case for a bit of humility on the part of financial and economic elites, I don’t know what would. Bitcoin isn’t even supposed to exist. It wasn’t created by the Fed, by Congress, by any academic bigshot. It was created by a programmer with a fake name and released on a small forum trafficked only by powerless geeks who dreamed of a different way.

It was alive in the world for fully 10 months, from January to October 2009, with no posted value at all. And yet, a few hundred people in the world kept working it, improving it, testing the network, trying it out for various purposes. Then one day, the great hinge of history took place. On October 5, 2009, it obtained a tiny amount of market value. This was the first tangible indication that it could work.

Keep in mind that hardly anyone believed that it would be possible to invent a new global currency built entirely of code, outside the banking structure, backed by no physical assets or government promises, with no capital investment, no big names behind it, and no institutional backing.

And yet there it was on that beautiful day, like a tiny sprout emerging from the ground as an indication that this little thing was alive and could grow.

And grow it has! Nothing annoys me more than when people talk as if Bitcoin has been a disappointment because it is still below its exchange-rate high of 18 months ago. That it has any value at all is amazing. That it ever obtained dollar parity is almost miraculous. And that it has become a safe haven for a world in monetary chains is nothing short of awesome.

It is once against strutting its stuff with the news of the Greek meltdown, the pressure on the euro, and the tumbling stock market in China. All this economic upheaval around the world used to cause a flight to the heavy yellow metal. But in the last 30 days, gold has fallen. Indeed, the price seems almost entirely industrialized and nonmonetary at this point — quite a change after 6,000 years as the embodiment of sound money and a hedge against uncertainty.

And this little digital tool — a distributed ledger that works with a synthetic money-like fabrication — has displaced it. Check out what’s happened to the price. This wonderful chart is a living rebuke to every central banker, academic bigshot, and economic planner in existence. 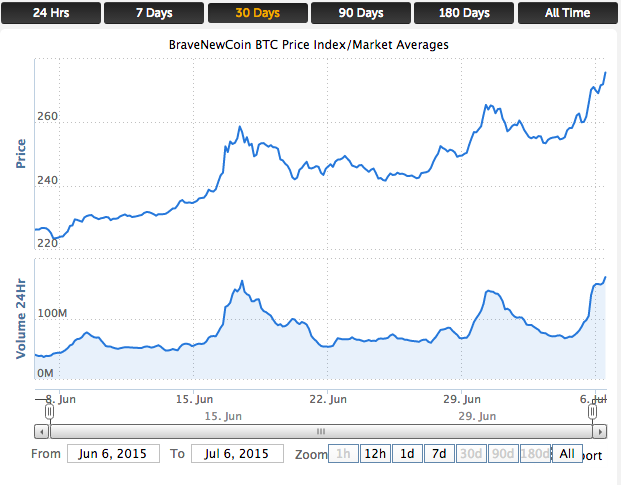 But consider this too. It’s not just Bitcoin that has benefited from recent economic instability. All the cryptocurrencies have done well — even Dogecoin, which was supposed to be a joke and now has a market capitalization nearing $20 million.

And kudos to Litecoin too, which has an exchange rate of $5/1. It lives in the shadow of Bitcoin, but it really shouldn’t. If Bitcoin didn’t exist, Litecoin itself would be a thing of wonder. (Follow all the cryptos as BraveNewCoin.com).

As much as people love to talk about the price (the exchange rate), that’s not really the important point.

Even if a cryptocurrency unit was only worth one penny, that would be enough to make the point that the technology works, that code can be money, that money can obtain value apart from banks and government and physical stuff, that there really is a way to transfer value peer-to-peer instantly around the world.

The beauty of the digital world is its malleability and its capacity for infinite reproducibility of anything that enters into its realm. When it comes to money, however, those are bugs, not features.

The mighty contribution of Bitcoin was to hack the basic features of the digital world and create an immutable protocol that digitally reproduces necessary features of the physical world. It is a gold standard in the cloud — but better, because it is not created or managed by any government.

That Bitcoin introduced this option to us should earn our respect and gratitude. Never let it be said that there is no way out. No system is so locked down as to leave no escape.