The Israeli Experiments in Voluntary Communism

Many Kibbutzim tried to implement Marxist theory on a small scale.

The ideas of newly born 19th-century socialism were appealing to many Jews in Europe at the time. It promised them equality, reassurance of the secularization spreading in the European Jewish society and, of course, the promise of a better future. When Zionism rose to prominence in the Jewish world, many thought socialism and Zionism were a perfect match. The mass immigration to Ottoman (and then British) Palestine would create an opportunity to build a utopian socialist society from scratch, without the institutional barriers in Europe. Anti-semitism, harsh treatment of socialist revolutionaries, and sometimes even rejections from local socialist movements drove many Jews (mostly from Russia) to emigrate.

Many Kibbutzim tried to fully implement Marxist theory on a small scale.

Historically, socialism has usually been enforced by a revolutionary or democratic government. But this was impossible as Israel was controlled by foreign powers. So a voluntary alternative was suggested: new immigrants would settle on land bought by the Jewish National Fund (which was devoted to buying land for present and future Jewish settlement) and establish a commune based on agriculture. The first attempt took place in 1910, when a group of eight men and two women settled in the southern tip of the Sea of Galilee, now “Degania Alef” in northern Israel.

The attempt to implement socialist ideas in the Middle East 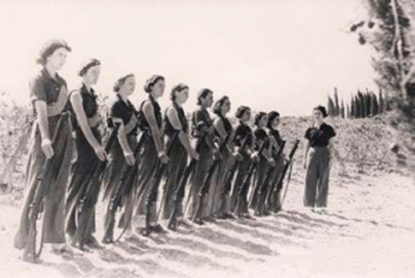 Women training at Mishmar HaEmek kibbutz in 1947 or during the 1948 Arab-Israeli War. Source: Wikipedia

Many Kibbutzim (Kibbutz in plural) were established later, mostly in the British mandate period. The kibbutzim seemed like the ultimate fulfillment of the Zionist dream and, as such, gained support even from non-socialist Jews. Jews could now be hard-working farmers, settling in their ancient homeland and making the wasteland bloom. In the Israeli Independence War (AKA Arab-Israeli War of 1948), their frontier locations made them immediate targets for invading Arab armies. They defended their positions first with private arms purchased and hidden away from British authorities, and then with the newly formed Israeli Defence Forces (Israeli military). Some fell, but others (including the previously mentioned Degania) managed to hold their positions outnumbered and outgunned, which shaped Israel’s borders after the war.

In 1948, Kibbutz members represented only 8% of Israel’s population but 22% of parliament.

Many Kibbutzim tried to fully implement Marxist theory on a small scale. No private property was allowed, every possession belonged to the Kibbutz. The elected Kibbutz leadership micromanaged this small scale economy, assigning jobs and Kibbutz’s members usage of collectively owned property. Even children were considered to be a “collective property” and were raised by the Kibbutz kindergarteners and teachers, allowed to see their parents for only a few hours each day. This practice also applied to teenagers until they were conscripted by the age of 18. This experiment in collectivist child care and education has since been the focus of academic research.

The Kibbutzim as a political power

The Kibbutzim were seen as a Zionist symbol and enjoyed significant influence in mainstream politics, especially in Israel’s first few years. In 1948, Kibbutz members represented only 8% of Israel’s population but comprised 22% of the first Knesset (Israel’s parliament). They had key positions in the military, the government, and in the large public sector. Because of their political power, the Kibbutzim were able to obtain generous land grants from the government and protection from foreign competition through tariffs, many of which are still in place. Israel's almost Soviet-style centrally planned economy meant that the Kibbutzim actually had it better than most people at the time.

Now, remember that in the first paragraph I only mentioned European Jews? This was no mistake – Kibbutzim were almost exclusively inhabited by Jews of European origins (“Ashkenazim”). Middle Eastern and North African Jews (“Mizrahim”) immigrated only in the 50s and 60s, and were sent to government-built “development towns” along Israel’s borders. They came in poor, and so became wage laborers for the much wealthier Kibbutzim nearby. This Ashkenazi-Mizrahi divide continues to influence Israel’s politics to this day. 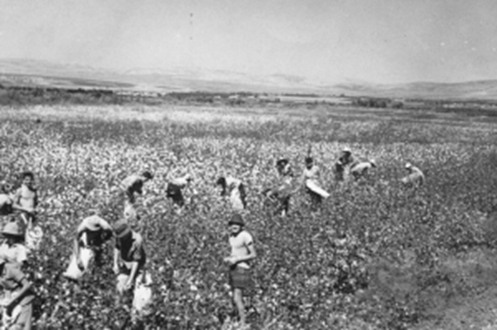 Too Zionist to fail

The Kibbutzim had a superior standard of living during Israel’s first several decades, but as the Israeli economy started a liberalization process during the late 1970s and 1980s, the general standard of living began to catch up to that enjoyed by the Kibbutzim and reduced the availability of cheap labor. Combined with a decline in members’ enthusiasm to work hard for the Kibbutz, this meant that the Kibbutzim could no longer afford the higher standard of living they had become accustomed to. The effects of a distorted incentive structure that were once masked now wreaked havoc on Kibbutzim finances. A Kibbutz member once told me: “Why should I turn off the light when I go out of the house? The Kibbutz pays for it!” When Israel’s stock markets crashed in 1983, most Kibbutzim found themselves buried in debt that they would never be able to repay. Because of their political power, the Israeli government erased most of their debt and bailed them out. This debt nationalization only ended in 2013, when the entire debt was paid off. You could call it the “Too Zionist to fail” policy.

Before the establishment of the state of Israel, Kibbutzim were almost an example of libertarian philosophy.

According to the debt arrangement, the Kibbutzim still had to repay some of their debt. Because of the drop in productivity due to youth urbanization and a general demoralization, most Kibbutzim privatized themselves and became regular communities with private property, keeping the title of "Kibbutz" mainly for traditional and historical reasons. Some Kibbutzim, however, are still “collectivized” as they were in the past. There is even an anarcho-communist Kibbutz called Samar in southern Israel. But their economic focus often had to shift from agriculture to industry and tourism. The remaining agricultural activity has become a powerful special interest group, and ending the tariffs that protect them is a major issue for Israeli libertarians.

An example of a voluntary communist society?

So are the Kibbutzim an example of a voluntary communist society, heeding to socialist ideals without a use of governmental force? Not exactly. Practically, they were subsidized by socialist (and less socialist) governments, and their agricultural businesses were protected by government tariffs and cheap governmental lands. But before the establishment of the state of Israel, Kibbutzim were almost an example of libertarian philosophy: settling on private soil legally purchased by a private fund, working hard to earn their living, selling their products to compete on global markets. They carried private arms, hiding them away from British authorities, harming none but to protect themselves. In this sense, early Kibbutzim were a model of voluntary action striving towards shared values and goals.

Republished from European Students for Liberty.

Idan Eretz is the co-head of the Tel-Aviv University SFL student group, studying Economics and History, and one of the founders of the Israeli “Liberty For All” organization. He likes to write about history, politics, economy and philosophy.