The Ideal Free Trade Agreement Should Fit on a Single Page

We all should agree that the ideal scenario is for nations to adopt free trade agreements in order to maximize the economic benefits for all consumers and businesses.

I’m for free trade because I want more jobs and more prosperity for the United States.

Indeed, I’ve argued we should copy the incredible economic success of Hong Kong and Singapore by unilaterally eliminating all trade barriers.

But some people complain that this is akin to disarmament in a hostile world. I reject that analogy. If my neighbor shoots himself in the foot, I’ve never thought I should “level the playing field” by also shooting my foot.

That being said, we all should agree that the ideal scenario is for nations to adopt free trade agreements in order to maximize the economic benefits for all consumers and businesses. 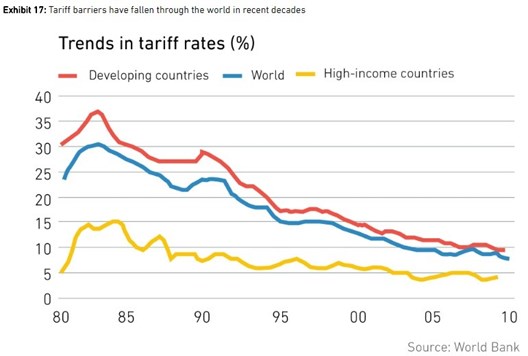 And the good news is that nations have been building on the multilateral success of the WTO by also adopting free trade agreements.

The United States, for instance, has 14 FTAs that govern trade with 20 nations, most notably NAFTA. And while I grouse about some of the EU’s statist tendencies, there is genuine free trade among member nations.

But there is some bad news. Politicians and bureaucrats are slowly but surely hijacking FTAs and undermining their pro-growth impact with red tape.

It’s become so much of a problem that some free traders are questioning whether the current approach is worthwhile. For example, Iain Murray of the Competitive Enterprise Institute explains why he isn’t losing any sleep about America backing out of the Trans-Pacific Partnership:

The Trans-Pacific Partnership is an example of why free trade came to have such a bad reputation with the American public. Rather than a simple agreement to lower tariffs for mutual benefit, it morphed into a massive international regulatory regime over 5,000 pages long. It was weighed down by numerous non-trade provisions aimed at appeasing non-trade special interests. …the TPP went down the road of regulatory harmonization.

He makes sure to point out that the TPP may still have been worthwhile when using cost-benefit analysis:

This is not to say that…the TPP’s tariff reductions would not have outweighed the regulatory burden.

But he argues that a much better approach is FTAs based on regulatory competition:

…there is an alternative to 5,000 pages of regulatory harmonization. …regulatory competition may be a better solution than harmonization… Regulatory competition works best by mutual recognition. For instance, Australia and New Zealand have formed a single economic market based around the Trans-Tasman Mutual Recognition Agreement, whereby…Goods legally sold in one country can be sold in the other.  This principle operates regardless of different standards, or other sale-related regulatory requirements between New Zealand and Australia. …Such an agreement would probably work very well between the U.S. and Canada – and, indeed, between the U.S. and both Australia and New Zealand in the Trans-Pacific context. …Australia, New Zealand, Canada, Chile, Singapore, and Hong Kong…A series of mutual recognition agreements with these former TPP countries would effectively form the nucleus of a Global Free Trade Association.

I would add the United Kingdom to Iain’s list (assuming it manages to extricate itself from the European Union).

Indeed, just yesterday I submitted a comment to the United States Trade Representative on a proposed FTA between the US and the UK.

Here’s some of that analysis:

A trade agreement between the United States and United Kingdom would be a chance to increase prosperity in both nations by eliminating all forms of trade barriers… It’s also an opportunity to refocus trade agreements in ways that recognize sovereignty and promote pro-market policies. More specifically, a free trade pact between the US and UK would offer a much-needed opportunity to discard the clutter of exceptions, long phase out periods, and non-trade issues, which has characterized recent agreements, and instead go with a cleaner approach that would allow the simplicity of unfettered commerce. The ideal trade pact should seek to make trade between the US and the UK as simple as trade between New York and Pennsylvania. That type of trade agreement doesn’t need to be cumbersome and doesn’t require a detailed thousand-page document.

I give my two cents on the benefits of mutual recognition and the value of reorienting FTAs in a pro-market direction:

…such a pact should be based on the principle of “mutual recognition,” which means that nations can have their own laws governing economic activity inside their borders, but they recognize that other nations have the same right. Most important, they also agree that there should be no restriction on the ability of consumers to buy from producers in the other nation(s). …Under such a regime, a company in the US wouldn’t have to produce separate products for UK customers since there would be no policy restricting a consumer in, say, London, from buying a product made in, say, Cleveland. …A pact for free and open trade between the US and UK could become a new role model for agreements between industrialized, high-income nations. If based on mutual recognition, such a free trade agreement should reverse the unfortunate trend of deals getting saddled with extraneous and/or harmful provisions.

And explain that FTAs based on mutual recognition produce an added benefit:

This approach respects national sovereignty and also would have the added benefit of encouraging policy competition between nations. If either the US or the UK was over-regulating in a certain sector, it would mean a loss of sales to the other country, which surely would create pressure for regulatory relief. Very similar to the way tax competition puts pressure on governments today not to impose excessive tax rates.

By the way, we also shouldn’t have regulatory harmonization since that increases systemic fragility.

In other words, it’s not a good idea to put all your eggs in one basket.

Let’s close with a picture that powerfully captures what’s wrong with the current approach to free trade agreements. Does anybody think the new Singapore-EU pact is really about unfettered commerce?

Here it is. The EU-Singapore free trade agreement. pic.twitter.com/rK5iKHZcqf

Looks to me like it’s really about politicians and bureaucrats micro-managing economic activity.

My FTA would fit on one page, or a scrap of one page: “There shall be no restrictions on commerce between Country A and Country B.”

Sort of like my version of a tax system compared to the mess we have now.

P.S. It goes without saying, but I’ll say it anyhow, that Switzerland should be high on the list for a pro-market FTA with the United States.