Any Brazilian interested in politics has developed a new morning habit: checking to see which politicians were arrested in the earliest hours of the day. Such arrests have become  common lately.

This very morning, there was a police raid on two former big kahunas who are being investigated for taking bribes and disrupting investigations on the mega-company Petrobrás. On the evening of the same day, I left my gym to find that the president of the Senate has been ousted by order of the Supreme Court.

Because he is standing trial for corruption, he can´t legally be in the succession line to the presidency. In his seat now sits another senator accused of essentially the same corruption scheme, but investigations haven’t caught him yet. Any morning now.

Somewhere in the thick of all of this there was a car wash and gas station that was used as a front to distribute the money.This is all part of a gigantic clean-up operation called Operation Carwash, and if politics is a sport in Brazil, Carwash just elevated us into a new World Cup. Scoring comes in the way of the feds knocking on politicians' doors at 5:30 a.m. with search and arrest warrants.

It all started in a very unassuming way. Your average money launderer gets arrested in an international drug trafficking scheme. It turns out that his books listed a Petrobrás director as a client. Said director was then arrested and confessed to taking bribes from a huge construction cartel operating within Petrobrás. Some of the bribes traced to politicians who appointed him.

The construction companies’ owners and directors were arrested and confessed to operating as a cartel. Everyone who was anyone in Petrobrás knew it and they were indirectly financing a big scheme to buy support in the legislature, control Congress, and elect politicians allied with the government. Investigators officially dubbed it a “bribocracy.”

Somewhere in the thick of all of this there was a car wash and gas station that was used as a front to distribute the money: hence the name Operation Carwash.

Fast forward two years and in the last hundred days we have impeached a president, ousted and arrested a leader of the house, arrested a senator for interfering with investigations under orders from the former president Lula da Silva, arrested and convicted dozens of politicians involved, and just hours ago ousted the president of the senate.

And the political World Cup is only going to get better from here on.

Any morning now, we’ll get to see the plea bargain from Odebrecht, the largest construction company involved in the scandal. The bargain was signed last week and statements are being taken as I write this article.

Odebrecht was so organized that they had a “Department of Structured Operations,” entrusted with handling the hundreds of millions of dollars that went to different politicians and parties. It’s expected they will rat out somewhere north of 150 politicians: the current president, two former presidents, and pretty much everyone else in between.

Those politicians aren’t silly gooses though. They realized ending the investigation was a simple matter: pass a law stopping it. In fact, a senator was recorded explicitly talking about that. He’s now the leader of the government in the senate, and was also in Odebrecht’s “Structured Operations” list.

But back to their plan. The idea was to create a law saying that all illicit or unaccounted donations are pardoned. The law created very strict mandates to arrest judges and investigators for “abuse of power.” The result, they believed, would be simple: any politician accused of anything could simply say it was an unaccounted donation and get away with everything, and if Sergio Moro, the judge in charge of the investigation, or the investigators themselves pushed too hard, they could simply be jailed.

To add insult to injury, they took a law proposed by the very same investigators and undersigned by 2.5 million people, dubbed “10 measures against corruption,” and turned it into, “10 measures in defense of corruption.”

The original proposal included harder sentences for corruption, easier seizure of property from illegal operations, and measures to speed trials, as 96.5% of corruption-related trials that go to the Supreme Court end up with no punishment and one-third get thrown out for being too old. The new proposal slashed eight measures, made the other two pointless, and added many devices to defend against investigations.

Back to the Streets

We Brazilians decided we’re not having any of that and took to the streets again. That was what last Sunday was all about.

The people came out in the tens of thousands in many cities in support of Sergio Moro, Operation Carwash, and for justice. Because it's Brazil, the protests included 20-feet-tall inflatable puppets of politicians in jail uniforms. 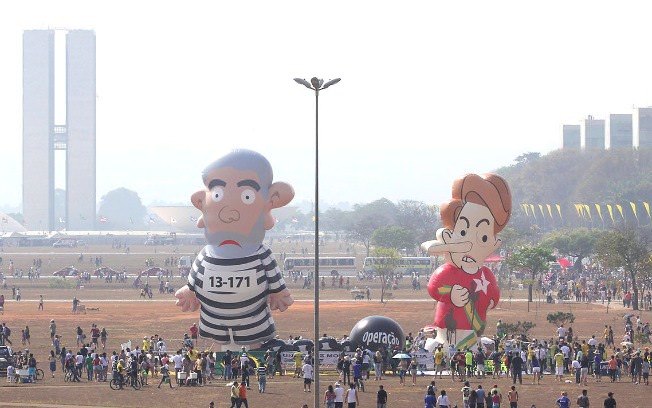 Some opposition politicians came out to get some press and had some success, but the general mentality was that attacks against the investigation would not be tolerated. As far as we can see, the message was heard and the attacks have stopped, for now. Protests were peaceful, friendly even, but the truth is that everyone is at the breaking point.

It´s a protest that unites all people, old and young, in the same sense of revolt and disgust against the whole political system, its parties and politicians, its institutions and bureaucracy. It feels like everyone is angry, but at the same time joyous to find that everyone else is also angry. It reminds me of the story about Warsaw´s blinking lights. Add to that the major economic crisis we are suffering, and you have yourself a good ol’ powder keg of angry masses.

On November 16, we saw how close we are to flipping out: between 50 and 100 people invaded the House floor in protest, sang the national anthem and chanted for a few hours. Some even demanded the military take control. The leader of the House ordered all media evacuated for “security reasons” and ordered TV transmissions cut. My guess is he didn´t want that stunt to get publicity and become a new national habit, because it very well might.

We are coming to the realization that the system cannot be repaired.And so here we are. Any morning now the biggest political shoe in our history will drop with Odebrecht´s plea bargain. Or maybe another former governor or senator will be arrested. Or maybe a new spinoff of Carwash will open a new path of investigations with big raids. Or maybe a new law will be passed halting everything, and we will all collectively lose our cool.

But one thing is for sure: something will happen. In the early days of Carwash, there was a general feeling that this would be all for nothing, Director Comey-style. As the investigation broadened, we the people grew bold. But even during the impeachment process, there still was a strong feeling that nothing would come out of it. As it is now, there is no putting the cat back in the bag. Something will have to happen.

The people stand closer now, united by something we all have in common. We all got the bill, and it was paid in unemployment, taxes, collapsing public services or what have you. And the politicians, who are not us, have collected. For example, one former governor of Rio de Janeiro was recently arrested with roughly one million dollars of jewelry in his apartment, all bought with cash, while the state is in a fiscal calamity and officials are discussing pension cuts.

The State Is Them

Brazilians have understood something deep, even if only implicitly: the state is not us, politicians are not us. The system exists for this theft; it´s working for the thieves.

We are coming to the realization that the system cannot be repaired, and more and more people are willing to entertain apparently crazy ideas such as privatizing everything, the free market, maybe even capitalism. Efforts to block investigations and pardon crimes have only made this more explicit to anyone who was living under a rock or was in flat-out denial: a condition ever more common to the remaining defenders of socialism in Brazil.

It´s impossible to tell what will happen. But something will. Any morning now.

Raphaël Lima is a popular media commentator and author in Brazil. His youtube channel is one of the largest and most closely watched in the country.