The Garage That Couldn’t Be Boarded Up

Uber and the jitney … everything old is new again

Last December, I used Uber for the first time. I downloaded the app onto my phone, entered my name, location, and credit card number, and told them where my daughters and I needed to go. The driver picked us up at my home five minutes later. I was able to access reviews that other riders had written for the same driver, to see a photograph of him and of the car that he would be using to pick me up, and to pay and tip him without juggling cash and credit cards and my two kids. Like nearly everyone else I know, I instantly became a fan of this fantastic new invention.

The jitneys … essentially provided a competitive market in urban transportation with the usual characteristics of rapid entry and exit, quick adaptation to changes in demand, and, in particular,  excellent adaptation to peak load demands. Some 60 percent of the jitneymen were part-time operators, many of whom simply carried passengers for a nickel on trips between home and work. 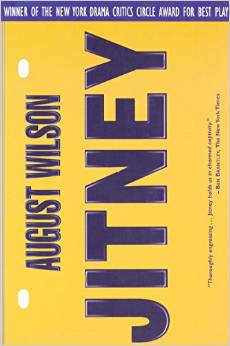 In February, I read August Wilson’s play, Jitney, written in 1979, about a jitney car service operating in Pittsburgh in the 1970s. As we watch the individual drivers deal with their often tumultuous personal relationships, we also hear about their passengers. The jitney drivers take people to work, to the grocery store, to the pawnshop, to the bus station, and on a host of other unspecified errands. They are an integral part of the community. Like the drivers in Sean Malone’s documentary No Van’s Land, they provide targeted transportation services to a neighborhood underserved by public transportation. We see the drivers in Jitney take pride in the way they fit into and take care of their community.

If we gonna be running jitneys out of here we gonna do it right.… I want all the cars inspected. The people got a right if you hauling them around in your car to expect the brakes to work. Clean out your trunk. Clean out the interior of your car. Keep your car clean. The people want to ride in a clean car. We providing a service to the community. We ain’t just giving rides to people. We providing a service.

That service is threatened when the urban planners and improvers at the Pittsburgh Renewal Council decide to board up the garage out of which the jitney service operates and much of the surrounding neighborhood. The drivers are skeptical that the improvements will ever really happen.

Reading Sowell’s book and Wilson’s play in such close proximity got me thinking. Uber isn’t a fantastic new idea. It’s a fantastic old idea that has returned because the omnipresence of smartphones has made running a jitney service easier and more effective. Uber drivers and other ridesharing services, as we have all read and as No Van’s Land demonstrates so effectively, are subject to protests and interference by competitors, to punitive regulation from local governments, and to a host of other challenges to their enterprise. This pushback is nothing new. Sowell notes, “The jitneys were put down in every American city to protect the street railways and, in particular, to perpetuate the cross-subsidization of the street railways’ city-wide fare structures.”

Despite these common problems, Uber and other 21st-century jitney drivers do not face the major challenge that the drivers in Jitney do. They do not need to operate from a centralized location with a phone. Now that we all have phones in our pockets, the Uber “garage” is everywhere. It can’t be boarded up.