The EU's Chief Brexit Negotiator Is an Anti-Anglophone

Barnier has a tendency to deliberately provoke the British.

When the European Union Commission needed to appoint a negotiator for its talks with the United Kingdom, the task was of essential importance. This person needed to be a distinguished diplomat, a careful communicator in the media, and a connoisseur of the intricacy of the relationship between the British Isles and the continent. The toxic political environment surrounding Brexit deserves an open-minded and calm voice to represent the 27 remaining voices of the European Union, which all have individual interests in remaining faithful trading partners with the UK.

Unfortunately, who we got is French politician Michel Barnier.

When the news broke that Barnier would be appointed by Commission president Jean-Claude Juncker, many Brits were outraged. The political editor of The Sun tweeted: 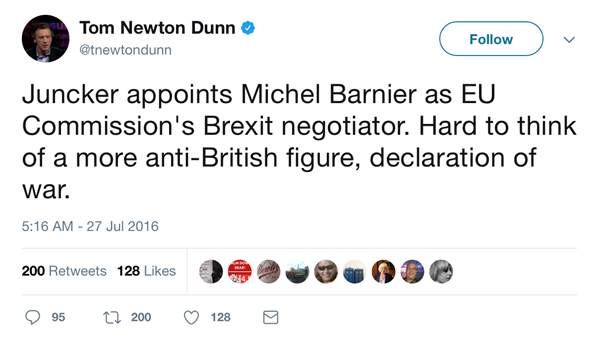 Michel Barnier embodies the archetype of a Brussels bureaucrat: his entire life has been inside politics, never working in the private sector in his life. In France, he was known for his advocacy for the European Union and further political integration. In 2005, after the French voted down the proposal for an EU constitution in a referendum, former president Jacques Chirac threw him out of the cabinet.

Between 2010 and 2014, Michel Barnier was the EU Commissioner for Internal Market and Services and infamous for his political priorities. After the financial crisis of 2008 hit the continent, Barnier was vocal in his support for a European Banking Authority, a proposal which was staunchly opposed by financial institutions in the City of London, the UK's financial heartland. Even German bankers criticised the implementation in ineffectiveness of the European Banking Authority (EBA), as the disagreements on an EU-level as to what it should actually do made directing it virtually impossible. The EU wanted to make one thing clear from the start: it was going to make an example out of Britain.

Barnier's EBA soon started regulating on its own. In 2013, the agency asked for a cap on the bonuses of managers, as it desired "guidelines on sound remuneration policies". These rules included a limit on awarding variable remuneration to 100% of fixed remuneration, or 200% with shareholder approval, and were opposed by both the government and UK regulators themselves. The British government even challenged the rules in the European Union Court of Justice.

In 2016, Brits were put off by the news that banks will likely raise provisions by 18 percent in order to offset the EBA's new accounting rules, which will apply from 2018 on.

One thing was clear, Michel Barnier would never set a friendly foot in the City of London again.

The Most Unconstructive Negotiators Imaginable

When the UK government under Prime Minister Theresa May appointed Brexit secretary David Davis the man certainly was in for one bumpy ride. Upon arrival in Brussels, the chairman of the Liberal Democrats in the European Parliament Guy Verhofstadt told the newly appointed minister "Welcome to Hell".

The EU wanted to make one thing clear from the start: it was going to make an example out of Britain. After the first negotiating between Davis and EU officials, Barnier said that the union "would make no concessions".

They have to comprehend that worsening trade relations with the United Kingdom will be detrimental to both sides.

"I will do all I can to put emotion to one side and stick to the facts, the figures, and the legal basis, and work with the United Kingdom to find an agreement in that frame of mind."

Far worse is Barnier's tendency to deliberately provoke the British. The EU’s chief Brexit negotiator demanded for the negotiating talks to be held in French, even though there are no official languages in the talks as all documents and speeches are translated regardless. In a similar fashion, EU Commission president Jean-Claude Juncker claimed that he prefers to express in French, as ‘English is slowly losing importance in Europe’.

Trade Relations between EU and UK

It frankly doesn't seem out of character for EU officials to despise the anglo-saxon view on the world. Not only is it rare for the continent to show appreciation for anything outside of the Queen and Harry Potter, the spirit of entrepreneurship and gratitude for the advantages of free-market capitalism seems rather repulsive to many Europeans. In fact, the differences in work ethic are apparent. In Michel Barnier's home country France, challenging the 35-hour working week is almost political taboo. Meanwhile, the UK profits off of the flexibility of less rigid labour regulations.

And yet, no matter how anti-British European Union officials might be, they have to comprehend that worsening trade relations with the United Kingdom will be detrimental to both sides, and especially the European public which the EU pretends to care so deeply about.

In April 2017, EU imports exceeded EU exports by £6.9 billion ($8.8 billion), meaning that the EU is more dependent on the Brits for trade relations than vice-versa. Getting back to WTO-tariffs means harming German car manufacturers, Italian parmesan-producers and French wineries.

The European Union needs to finally embrace free trade across the board, not only for its privileged members. Sneering at the Brits might be fun for boosting your own ego and publicity. It is not for the regular people who depend on trade.