The European Union Wants to Be an Even Bigger Global Bully

Over time, the European Union has developed into more than just an economic cooperation between nations. The EU is a big and intrusive government that constantly acquires new powers. And like all superstates, its tendency to defend freedom against control is swindling.

The "United State of Europe"

When Euroscepticism became a part of the political landscape of the European Union, fears of the creation of a “United States of Europe” were widespread among circles opposed to this political project. In those days, this fear was widely regarded as cliché. However, clichés become clichés for a reason.

Much like those skeptical of the Brussels bureaucracy predicted, the union has concentrated power within its structures. Now that the United Kingdom has become the first country to leave the EU, you might think that there would be a re-evaluation of this large centralization effort. But to the contrary, the European Union is increasingly moving towards the centralization of two key aspects: foreign policy and defense.

Ever since the EU’s last institutional reform in 2009, the European Commission, which is the executive branch, has appointed a High Commissioner for Foreign Relations. The position, currently held by the Italian politician Federica Mogherini, has been mocked for essentially being useless since the EU doesn’t have a common foreign policy. This would be similar to appointing a secretary to a department that has been granted no powers by the government whatsoever. However, this hasn’t prevented Mogherini from making policy statements in an effort to unite European member states behind a common position.

A notable example of this was when Mogherini condemned the United States for moving the embassy in Israel from Tel Aviv to Jerusalem, but the Czech Republic blocked any attempt to have a common position. Czech president Miloš Zeman consecutively promised to follow the American lead and move its embassy as well.

This has given headaches to those who intend to centralize the European Union. In Brussels, the idea that individual member states diverge from the “common sense” position is ill-received; something that it best demonstrated by influential European Parliament member and Brexit negotiator Guy Verhofstadt in this tweet: 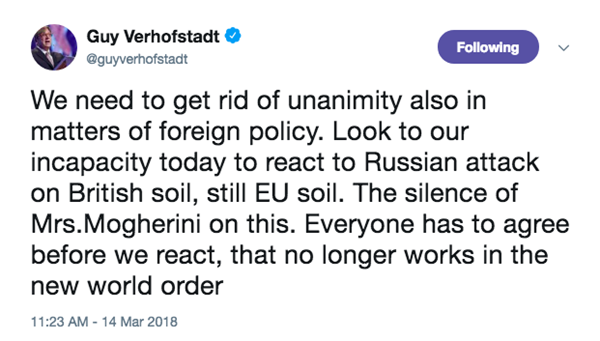 The last sentence is essential for the case made by EU-federalists. To these federalists, if they are going to live in a world where the European continent becomes increasingly less influential, bundling forces is the only way to preserve a global European standing. Those who support the centralization of power attempt to use this fear in order to get rid of the process of unanimity, by which all member states need to agree on a common policy platform.

This paranoia regarding the diminishing influence of Europe and the fear of the content being left “on its own” have influenced other policies as well. The European Union is also working towards a military union. After President Trump’s decision to reduce U.S military spending in Europe, Brussels has increasingly made the case for a common defense union.

The so-called Permanent Structured Cooperation (PESCO) is a project that furthers structural integration of the military forces of the 25 participating countries. This discludes the UK, Denmark, and the neutral state of Malta, who will not be participating. Current plans include upgrades to maritime surveillance, armored infantry vehicles, and artillery.

This initiative raises questions about the interaction with NATO, for which almost none of the participating states contribute the required two percent. In fact, in post-Brexit Europe, 80 percent of NATO defense spending will come from non-EU allies. Furthermore, in a Europe which is safer now than in the 1970s and amongst the most peaceful places on the planet, what threat is the continent preparing for? Only in a world where Brussels imagines Russia to invade the Baltic states does this move make credible sense. However, even if we were to evaluate this idea as plausible, we should be mindful of how much military power we concentrate in one single political structure. Instead of buying new tanks, missiles, and drones, the European Union should attempt to increase the number of peaceful interactions between states by practicing free and open trade with the world.

This is why the classical liberal thinkers in Europe have consistently been suspicious of the centralization of government. When the King of France centralized his country, he did so to raise taxes and shower the continent with war. After the German Empire had unified a fractured country of small states, Europe got entangled in World War I through aggressive military expansion of massive states.

Is this to say that the bureaucrats in Brussels are set for world domination? Certainly not. They are in fact so motivated by the attempt to prevent the acts of the 20th century, that they are willing to institute a government of technocrats with little legitimacy but the right intentions. The road to hell, however, is paved with good intentions. The power structure that would be set in place through a European superstate is dangerous not because the current bureaucrats are evil, but because it attracts those who are already corrupted. This is exactly what Friedrich Hayek anticipated in The Road to Serfdom in the chapter called Why the Worst Get on Top”:

“Yet while there is little that is likely to induce men who are good by our standards to aspire to leading positions in the totalitarian machine, and much to deter them, there will be special opportunities for the ruthless and unscrupulous.”