As long as it's voluntary, free-market supporters are happy to let others experiment with socialism. The opposite does not hold true.

Why are there so few liberty-oriented societies compared to the number of places with statist governments?

And why does it seem like the size and scope of government keeps expanding around the world? 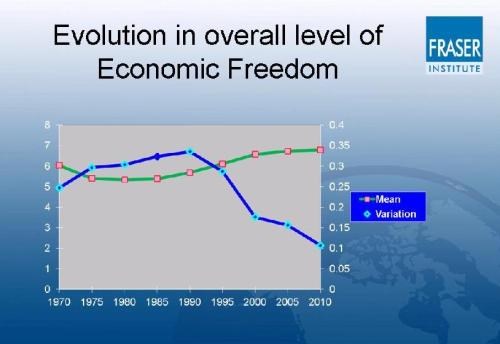 If I’m feeling optimistic, I’ll disagree with the tone of those questions. There are reasons to be cheerful, after all. the Soviet Empire collapsed and there’s solid data that global economic liberty has increased over the past few decades. And for those who care about evidence, there’s a slam-dunk argument that smaller government means more prosperity.

But if I’m feeling pessimistic, I’ll look at grim numbers suggesting that the burden of government automatically will expand because of demographic change. And I also worry about eroding societal capital, with more and more people thinking it’s okay to live off the government. And let’s not forget “public choice,” the theory that explains why politicians have an incentive to make government bigger.

Why Decentralization Is Important

I go back and forth on whether the glass is half full or half empty, and I’m not sure which side is winning. All I can say for sure is that Americans are getting increasingly polarized as we have big fights about the proper role of government.

It is why I’ve always thought decentralization would be a good idea. Not just for policy reasons, but also for domestic tranquility. All the leftists could move to places such as California, Illinois, and New Jersey and vote themselves Greek-style government. And all the advocates of limited government could move to more laissez-faire states such as New Hampshire, Texas, and South Dakota.

We don’t need a national divorce, not even the humorous version. We just need Swiss-style federalism.

But statists will never agree to that approach. And these two sentences from Reddit‘s Libertarian page succinctly explain the left’s opposition.

This guy nails it.

Libertarians have no objection to a bunch of statists creating some sort of socialist or communist mini-society, so long as it’s voluntary. Indeed, we’ve periodically had experimental societies in America based on Marxist principles. Starting with the Pilgrims (who learned from their mistake). And I still laugh every time I think about Bernie Sanders getting ejected from a hippie commune because he was too lazy to do his share of the common work.

The bottom line is that federalism is good because it means people can easily move when a government imposes bad policy.

But this tolerance isn’t a two-way street. Libertarians will let socialists create statist systems inside a free society, but the left won’t allow libertarian outposts in statist societies.

Heck, our statist friends don’t even like it when other nations have pro-market policy. That’s one of the reasons international bureaucracies always persecute so-called tax havens. Folks on the left may be misguided, but they’re usually not stupid. They know that statist systems will quickly fail if productive people have the ability to move themselves (or at least their money) across national borders.

The bottom line is that federalism is good because it means people can easily move when a government imposes bad policy. This is also a recipe for tolerance and tranquility, though only one side sees it that way.

P.S. The left is so hostile to tax havens that a bureaucrat from the U.S. Treasury accused me of “being disloyal” to America. A former Senator said my actions to defend low-tax jurisdictions were akin to “trading with the enemy.” And the bureaucrats at the OECD actually threatened to throw me in a Mexican jail for defending tax competition.