The Difference between a Bitcoin and a Tulip

The Bitcoin buying frenzy most closely resembles the speculative purchase of Google shares than the tulip craze.

Over the festive season, the conversation in my household inevitably turned to the phenomenal rise – and fall – in the US dollar price (exchange rate) for Bitcoin during December (Figure 1). The roller-coaster ride of the blockchain-based currency has been front-page news for the mainstream media, where it has been both likened to and disassociated from the boom-and-bust of the infamous 1637 Dutch tulip craze. 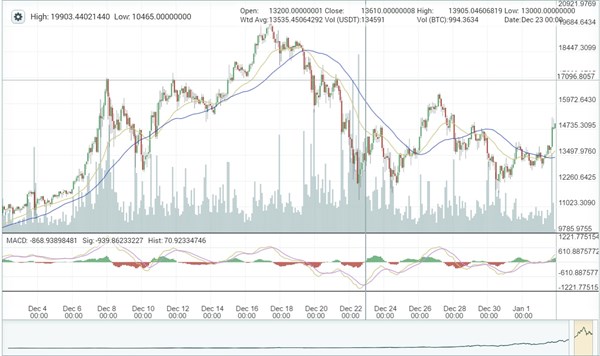 It cannot be denied that December 2017 marks the point where the terms “bitcoin” and “cryptocurrency” went mainstream. But whereas in 1637 the average participant in the Dutch tulip market had a fairly good idea about what was being promised, as 2018 dawns, confusion abounds about exactly what Bitcoin and other cryptocurrencies such as Ethereum (Figure 2), Litecoin, and Dash are, how they differ from other currencies or commodities, and whether trading them warrants any special policy attention. 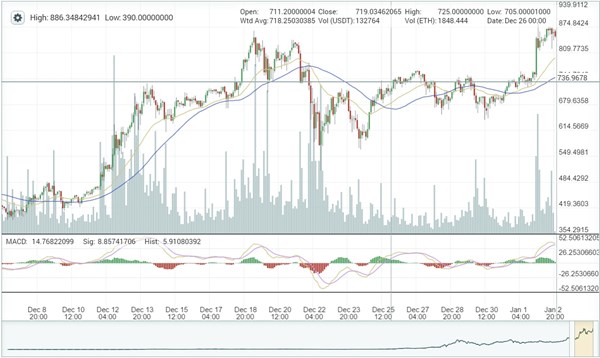 A starting point for understanding the similarities and differences between Bitcoin and tulips comes from William Stanley Jevons. His 1875 work, “Money and the Mechanism of Exchange” defines the four functions of a currency: as a medium of exchange, a measure of value (or unit of account), a standard of deferred payment, and a store of value.

Comparing Bitcoin with tulips reveals that tulips fulfill only the store of value function. To qualify as a currency, Bitcoin and other cryptocurrencies (which arguably include digital credits such as Airpoints) must fulfill each of these four functions. Clearly, a range of merchants is willing to price in and accept Bitcoin (and Airpoints) in exchange for goods and services, and they can be used to transfer value from one person to another (albeit that Airpoints transferability is somewhat limited), and thereby settle debts. A sum of Bitcoin (or Airpoints) can be held for a period of time as a store of value to be transferred or redeemed in the future, albeit that the terms of exchange may be different to those prevailing when the unit of currency was first acquired. Their status as currencies seems assured.

However, comparing Bitcoin with tulips reveals that tulips fulfill only the store of value function. Tulips are commodities, like stocks and shares, rather than currencies like the US dollar. Tulips (and shares) have not commonly been used to price and transact deals for other commodities or to settle debts. Nor have they been used primarily as a means of moving wealth from one location or person to another. However, both tulips and shares have been purchased in the anticipation that they will either hold or increase their value to a greater extent than the purchaser can expect from holding the sum used for their purchase in a currency (or the alternatives that can be purchased with it).

A Currency or Something Else?

If there is a parallel to draw between the 2017 Bitcoin boom and the 1637 tulip craze, it is that the vast majority of people purchasing bitcoins in December have been buying (and selling) a store of value perceived to offer better (worse) returns than the alternatives on offer. They are not buying a currency with which to actually transact — like when I convert my US dollar-denominated paycheck into New Zealand dollars, for example. One currency function — a store of value — appears to have crowded out the other three.

Indeed, the Bitcoin buying frenzy arguably resembles even more closely the speculative purchase of shares in digital corporations such as Google and Amazon than the tulip craze. Ironically, one of the significant differences between the cryptocurrency and the currencies of nation-states issued and overseen by Central Banks appears to have led to this state of affairs being possible in the first place.

Digital currencies such as Bitcoin are hybrids. The difference is that since August 15, 1971, when the US unilaterally terminated convertibility of the US dollar to gold, the dollar and most other national currencies have been fiat currencies. Fiat currency has value only by government order (Airpoints are corporate fiat currencies because their value is determined by corporate orders). The price (in another currency) that individuals are prepared to pay for a dollar (or Airpoint) is a function of the faith those individuals have in the actions of the government (or corporate entity) to maintain the value of the dollar (or Airpoint) relative to the alternative currency in which that value can be held. Actions such as quantitative easing — increasing the supply of dollars/Airpoints — lower the price of a dollar relative to other currencies where no change occurs by altering the balance of supply and demand.

By contrast, digital currencies such as Bitcoin are hybrids. As well as exhibiting some aspects of fiat currencies, they retain some of the elements of commodity currencies and representative money. Commodity currencies derive their value from the value of an underlying commodity (e.g., gold used in the coins). Representative money consists of tokens that can be exchanged for a fixed quantity of a commodity (e.g., gold). The value of representative money is a function of the value of the underlying commodity. If the supply of that commodity is limited (e.g., no more gold to make coins can be mined), then the ability to manipulate the currency price (exchange rate) downward by varying the quantity in circulation (as occurs with quantitative easing in fiat currencies) is no longer an option.

The Bitcoin price has been highly volatile, as speculation has abounded. In the case of Bitcoin, by design, the total supply that will ever be available is 21 million (the current number in circulation is a little under 17 million). From simple laws of supply and demand, the more people want to buy a share of the known, fixed quantity of bitcoins, the higher the price is expected to be, all else held equal. In this manner, bitcoins are functioning more like the limited quantity of shares made available in an initial public offering (IPO) than as a unit of currency like the US dollar, the total number of which varies constantly. In contrast, the quantity of tulips was not fixed, as some bulbs could be used to propagate more bulbs rather than being planted to render flowers.

While the organization overseeing Bitcoin is not traded, the “coins” themselves are operating as a proxy for shares if they were being traded, reflecting both the quantity of individuals wanting to buy a share and their collective expectations of what the firm is worth. And, as is the case for most IPOs, that price can be influenced by the quantity and quality of information in the public domain. Hence the Bitcoin price has been highly volatile, as speculation has abounded in the media as to whether the current price path is either reasonable or sustainable.

While Bitcoin has been the most-talked-about cryptocurrency, it is not the only one “on the market.” Bitcoin ended December around 25 percent higher (relative to the US dollar) than it began, but its less-famous (and uncapped) cryptomate Ethereum rose by 75 percent.

This discussion suggests that the first question to resolve before any policies can be formed is whether the objects of interest are currencies or something else, and, if they are currencies, what type they have adopted. As with the debate over whether Uber is an electronic matching platform or a taxi service, this may take some time, as the exercise is far from straightforward.

Bronwyn Howell is an adjunct scholar at the American Enterprise Institute.