Trevor is right; it turns out that criminals don't actually care about signs.

I like when leftists accidentally make the case for limited government.

You can look at more examples here, but you get the point.

And now we have another item for our collection.

Sean Davis of The Federalist must believe in taking candy from babies and in exploiting the weak and defenseless. I’m jumping to this uncharacteristic conclusion because he just body-slammed a very vulnerable target. To be more specific, he mocked Trevor Noah of the Daily Show for some amazingly vapid comments that inadvertently decimated the gun-free-zone argument of Barack Obama and Hillary Clinton.

You should read the whole thing, but here are some of the more relevant portions of Sean’s article.

Trevor Noah, the host of Comedy Central’s The Daily Show, accidentally destroyed the case for gun control during his show on Wednesday night. …The target of Noah’s ire was an ice cream shop owner in a small town southeast of St. Cloud, Minnesota — the site of a mass stabbing at a mall last weekend — who put up a sign outside of his restaurant that read, “Muslims Get Out.”

Sean then does something very unfair (at least in the mind of statists). He directly transcribes part of Noah’s diatribe so we can see his argument for ourselves (he also includes the video if you click through to see the full story from The Federalist). Here’s some of what Mr. Noah said.

…what’s also strange is this man genuinely thought people who go around blowing people up would be stopped by a sign? You realize you’re talking to terrorists, not vampires. They don’t need to be invited in, alright? Or maybe he’s onto something, because if you think about it, we’ve never tried that. We’ve never actually tried to repel terrorists with signs. Yeah, maybe that’s all the airports need is a sign that says “No Terrorists,” yes? Yeah, and then guys are going to be walking going, “Oh, I was going to blow up the airport, but the rules are rules and they said I can’t come in…”

If this was a play-by-play analysis, at this point I would say that Noah taped a sign to his own back that says “kick me.”

So Sean obliges with this understated observation.

Noah probably doesn’t know it, but he just accidentally made an airtight case against gun-free zones in particular and gun control in general. He is 100 percent correct: people hell-bent on murdering as many people as possible don’t really care about silly signs or laws that tell them not to murder people. A sign that says “No Guns” will no more keep a violent jihadi from gunning down a bunch of innocent people than will a sign that says “Muslims Get Out.”

Having exposed the giant flaw in Noah’s logic (if you could call it that), Sean then buries him under a pile of examples.

Being a generous soul, Sean concludes with some helpful advice.

A sign that says “Muslims Get Out” will do absolutely nothing to prevent radical Islamists from wreaking havoc. Trevor Noah understands this. If only he would learn to apply his logic to the argument from gun controllers that all we need to end violence are a few more signs telling terrorists not to use guns.

Reminds me of lesson contained in this Chuck Asay cartoon. Or in this amusing video.

Speaking of confused leftists, here’s a poster that is especially relevant given the racial unrest in Charlotte and elsewhere. 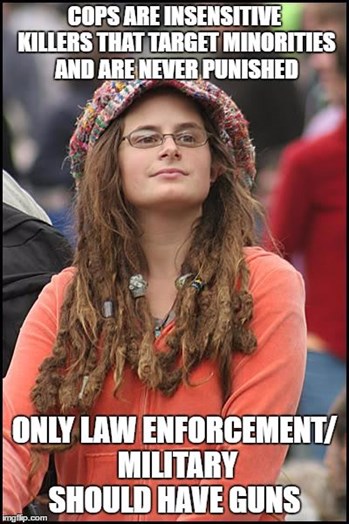 This young lady apparently is famous for appearing in Internet memes. She also showed up in this example of gun control satire.

Since we’re making fun of statists, let’s enjoy this story from the Boston Globe about a hack politician inadvertently boosting gun sales.

Massachusetts gun dealers sold more than 2,000 military-style rifles Wednesday — nearly one-quarter of the total sold last year — after Attorney General Maura Healey moved to bar semiautomatic rifles that have been altered slightly to evade the state’s assault weapons ban. The 2,251 assault rifles snapped up in a gun-buying frenzy represented a remarkable uptick from the 132 sold Tuesday and the 51 sold Monday, before Healey announced her ban. …The run on assault rifles raised questions about whether a policy designed to keep the high-powered weapons off the streets had instead unleashed a flood of them. …said Greg Malany, owner of GFA Arms TEC in Natick, which stayed open until just before midnight Wednesday to accommodate the line of customers that snaked out the door and onto the street. “We had to turn customers away,” he said.

Wow, makes you wonder whether Healey is actually an investor in the firearms industry.

The World's Most Sensible Nation

Let’s close with some good news on gun from overseas. It seems that there’s been an effort in Switzerland to discourage members of the militia from keeping guns at home. The only problem is that Swiss men don’t seem to share the anti-gun sentiments of “trade unions, churches, pacifists and centre-left parties.” Here’s some background.

All able-bodied Swiss men must do military service and have the option of keeping their army rifle at home. …Anti-gun campaigners have tried – and failed – on several occasions to ban military weapons from Swiss households. In 2011, Swiss voters rejected a controversial initiative on restricting access to firearms.

But a policy was implemented allowing men to store their guns outside their homes.

…since the beginning of 2010, members of the Swiss army have the option of storing their rifles, pistols and other weapons free of charge at arsenals or military barracks when they are not doing their military service.

So how many Swiss households took advantage of this opportunity?

In other words, 99.5 percent of the militia did the equivalent of “voting with their feet” and chose to keep their weapons at home.

Now you can see why I call Switzerland the world’s most sensible nation.