The Costs of Hysteria

How economists are misleading the public on climate-change policy

Suppose the “scientific consensus” on climate change is right. Let’s also stipulate, for the sake of argument, that the computer projections used by the United Nations and the US government are correct, and that economists are able to translate those data into meaningful projections about costs and benefits to people living in the future with climate change.

Despite what the public has been led to believe, the situation is not a crisis at all — and certainly not something that demands drastic government actions to avert serious damage to the environment. In fact, implementing the wrong policy can cause far more damage than it can prevent.

It's understandable that the public has no idea of the real state of the literature on climate change policy, because even professional economists use utterly misleading rhetoric in this arena. To show what I mean, first, let’s quote from a recent Noah Smith Bloomberg article, which urges left-liberals to support the Trans-Pacific Partnership (TPP) trade deal:

One of the bigger economic issues under debate right now is the Trans-Pacific Partnership (TPP), the multilateral trade deal that would include most countries in the Asia-Pacific region as well as the US. Many people both here and abroad are suspicious of trade deals, while economists usually support them. This time around, however, the dynamic is a little bit different — the TPP is getting some pushback from left-leaning economists such as Paul Krugman.

Krugman’s point is that since US trade is already pretty liberalized … the effect of further liberalization will be small.… I’m usually more of a free-trade skeptic than the average economist.… But in this case, I’m strongly on the pro-TPP side. There are just too many good arguments in favor.

University of California-Berkeley economist Brad DeLong does some quick back-of-the-envelope calculations, and estimates that the TPP would increase the world’s wealth by a total of $3 trillion. Though that’s not a big deal in the grand scheme of things, it’s one of the best reforms that’s feasible in the current polarized political situation. (emphasis added)

To summarize the flavor of Smith’s discussion, he thinks the TPP is “one of the bigger economic issues” today, and that its potential windfall to humanity of $3 trillion is “not a big deal in the grand scheme of things” but certainly worth pursuing if attainable. Krugman disagrees with Smith’s assessment, but their differences are clearly quibbles over numbers and strategies; it’s not as if Smith thinks Krugman is a “Ricardo denier” or accuses Krugman of hating poor Asians by opposing the trade deal.

We get a much different tone if instead we look at Smith discussing climate-change policy. For example, in June 2014, Smith wrote a Bloomberg piece on five ways to fight global warming. In the interest of brevity, let me simply quote Smith’s concluding paragraph:

If we do these five things, then the US can still save the world from global warming, even though we’re no longer the main cause of the problem. And the short-run cost to our economy will be very moderate. Saving the world on the cheap sounds like a good idea to me. (emphasis added)

Clearly, there is a chasm in the rhetoric between Smith’s two Bloomberg pieces. When discussing the TPP, it’s an honest disagreement between experts over a trade agreement that Smith thinks is definitely worthwhile, but in the grand scheme is not that big a deal. In contrast, government policies concerning climate change literally involve the fate of the planet.

At this point, most readers would wonder what the problem is. After all, isn’t man-made climate change a global crisis? Why shouldn’t Smith use much stronger rhetoric when describing it?

I am making this comparison because according to one of the pioneers in climate-change economics, William Nordhaus, even if all governments around the world implemented the textbook-perfect carbon tax, the net gain to humanity would be … drumroll please … $3 trillion. In other words, one of the world’s experts on the economics of climate change estimates that the difference to humanity between (a) implementing the perfect carbon-tax policy solution and (b) doing absolutely nothing was about the same difference as DeLong estimated when it comes to the TPP.

To be more specific, the $3 trillion Nordhaus estimate comes from the 2008 calibration of his Dynamic Integrated Climate-Economy (DICE) model. (The numbers have gone up since then, but I studied his 2008 calibration in great detail.) Note that this isn’t some “denier” computer simulation, rejected by the serious scientists. On the contrary, Nordhaus’s DICE model was one of only three chosen by the Obama administration when it set up a working group to estimate the monetary damages of carbon dioxide emissions. To help the reader understand the trade-offs humanity faces when it comes to climate change, let me reproduce table 4 from my Independent Review article that critically evaluated Nordhaus’s model: 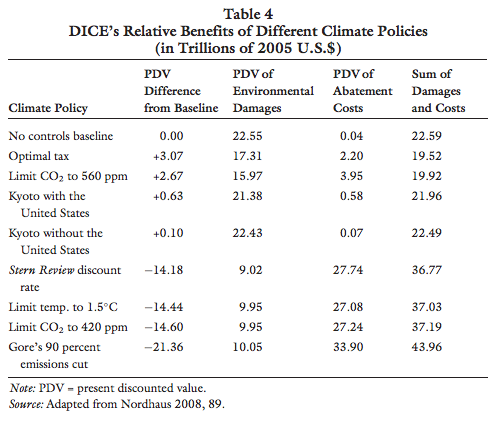 The table shows Nordhaus’s estimates (made in 2008 based on the “consensus” scientific assessments of the time) of the net benefits of various possible governmental climate policy approaches. The first row shows what happens if governments do nothing. There will be $22.55 trillion (in present value terms, and quoted in 2005 dollars) of environmental damage, but virtually no economic costs of complying with regulations, for a total harm of $22.59 trillion.

In contrast, if governments around the world implemented Nordhaus’s recommended “optimal” carbon tax, the world would be spared a little more than $5 trillion in future environmental damage, while future economic output would be $2.2 trillion lower due to complying with the carbon tax. Adding it all up, humanity would suffer total harms of $19.52 trillion, meaning the world would be $3.07 trillion wealthier with the optimal, global carbon tax (because $22.59 − $19.52 = $3.07).

Central to the economic way of thinking is the concept of trade-offs. Every possible policy — including a policy of doing nothing — comes with costs. But the public tends to hear about only one set of costs, not the full array. For example, as the earlier table shows, the wrong climate policy can be much, much worse than doing nothing. Nordhaus evaluated Al Gore’s suggestion to cut emissions by 90 percent, and estimated that it would make humanity some $21 trillion poorer compared to the do-nothing baseline — a net harm seven times greater than the net benefits of the textbook-optimal approach.

My point here is not to trumpet Nordhaus’s numbers as being gospel. (My Independent Review article was a full-blown critique of his model.) Rather, I am pointing out that even one of the leading models that underpins the so-called consensus on climate-change activism shows that this is hardly the planetary crisis that the rhetoric of Smith and others would suggest. The actual numbers are in the same ballpark as those of trade deals — and nobody thinks the fate of the planet hangs on the passage of a trade deal.

More generally, what even most economists have failed to convey to the public is that climate-change policies at best will affect things on the margin. Nordhaus’s table beautifully illustrates this. The optimal carbon tax doesn’t eliminate the climate-change damage that his computer simulations predict. On the contrary, the carbon tax only reduces it from about $23 trillion down to $17 billion. The reason it doesn’t make sense to enact a more aggressive carbon tax is that the (marginal) harm to the conventional economy would exceed the (marginal) environmental benefit. There are several policies in the table that reduce environmental damage below the $17 trillion mark, but they hurt the economy so much more that, on net, they are inferior approaches.

It is understandable that noneconomists would fail to employ marginal analysis and would engage in overblown rhetoric when discussing something as controversial as climate-change policy. However, too many professional economists have also fallen into this bad habit, including not just Smith but also Krugman and many others.