The Concorde Fallacy: Why We Can't Quit Losing Battles

Iraq and the evolution of irrationality

Adam Gurri has an interesting post at The Umlaut about the evolution of the so-called Concorde Fallacy. He suggests that it is not actually (or was not always) an error.

The fallacy involves valuing a project based on how much you’ve already invested — its “sunk costs” — rather than on its real present value. 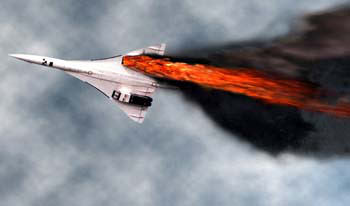 Yet, from the Concorde jet to the Iraq War, people constantly fall into the error of reasoning from sunk costs. We say things like, “We’ve come too far to stop now!” and “If we cut and run, it will all have been in vain!”

What’s more, people are really convinced by these arguments. Inexperienced gamblers often fall into this trap: “Sure, the house took me the last 10 hands in a row, but if I get up now, I’ll have lost everything! I’ve got to get it back!”

We tend think of money we’ve already lost as being “still on the table,” and if only we raise the stakes, we could get it back. To leave would force us to admit our mistake and reckon its cost.

But the deeper question is why.

If this tendency is both costly and pervasive — as indeed it is — why are humans so prone to make it? It seems as though natural selection ought to have removed any such propensity from among our ancestors long ago.

Could it be that this kind of reasoning actually had survival value in the past? Was the Concorde Fallacy always a fallacy, or could it have once been a beneficial adaptation?

If sunk cost reasoning is so universal, isn’t it reasonable to assume that it has come in handy once or twice? … It could be that at some point in our species’ history, the motivation to see something through to completion had a greater probability of ensuring survival than having a high willingness to cut one’s losses.

But this can't be literally true. The fallacy is, by definition, a fallacy: It is never rational to allow past costs to determine future investments. If it pays to see it through, it will be because of future returns, not past expenditures.

Whether or not humans can think this way and still muddle through somehow, we can be sure that natural selection itself is not fooled. The calculus of differential reproduction doesn’t fall for logical fallacies, so when we find organisms seemingly behaving in naively uneconomical ways, we ought to look closer at the tradeoffs they (or rather, their genes) are facing.

Take the digger wasp Sphex ichneumoneus: It seems to commit a version of Concorde Fallacy.

In his book The Extended Phenotype, Richard Dawkins explains the strange case:

Solitary females provision burrows with stung and paralyzed katydids which are to serve as food for their larvae… Occasionally two females find themselves provisioning the same burrow, and they usually end up fighting over it.

Each fight goes on until one wasp, thereby defined as the loser, flees the area, leaving the winner in control of the burrow and all the katydids caught by both wasps. …

The evidence suggested that each wasp fought for a time proportional to her own investment [the number of katydids she personally had caught], rather than proportional to the “true value” of the burrow [the total number up for grabs].

Emphasis mine. What’s going on here? This looks like a sunk cost fallacy, valuing the fight based on what she has personally invested, rather than what she actually has to gain.

You could tell a story about how “high willingness to cut one’s losses had a greater probability of ensuring survival than seeing it through to completion” — but this is a strange claim. Is there really survival value for the wasp in misestimating the value of fighting, in potential injury versus potential reward?

In a 1980 paper, Dawkins and Brockmann looked more closely: “Could it be that what appeared to be maladaptive was better interpreted as an optimum, given certain constraints? The question then became: Is there a constraint such that the wasps’ Concordian behavior is the best they can achieve under it?” 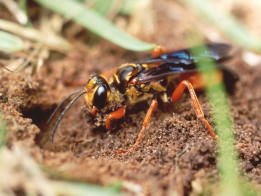 Yes, there was: sensory constraints.

It seems that Sphex is unable count the number of katydids in the burrow, but she is able keep track of the number she personally caught. Each wasp only “knows” enough to justify fighting for the katydids she individually brought to the burrow.*

Given this information asymmetry, the wasps are making the most rational calculation they can, but their sensory equipment is simply insufficient to allow them to make a fully informed choice.

Why should natural selection have left Sphex in the lurch like this? It isn’t an inevitable limitation of their genetic variation — they could have evolved the ability to assess the contents of a burrow.

For instance, the female of a related wasp species, Ammophila campestris, maintains several burrows simultaneously, and she counts their contents each morning to determine what she has to gather for that day.

But running the sensory equipment required to do this is expensive. If experimenters change the contents of the burrow after her morning inspection, Ammophila’s behavior remains unaffected, even though she returns to each burrow throughout the day. She doesn’t notice changes after her initial count.

Dawkins explains, “She appears, therefore, to use her assessment facility sparingly, switching it off for the rest of the day after the morning inspection, almost as though it was a costly, power-consuming instrument.”

Sphex doesn’t need this counting faculty because she doesn’t progressively maintain multiple burrows. She simply buries one larvae at a time with enough food and moves on. It makes evolutionary sense to avoid not only the “overhead” costs of running the counting faculty, but also the “fixed” cost of building the sensory apparatus altogether.

The fact that it would be useful in a few rare instances that some scientists chose to study — such as fighting over burrows — is not enough.

The genetic payoff for being able to gather the information she would need to make a fully informed, perfectly rational decision in the rare event of a fight over a burrow has not, on average, paid the cost of investment for Sphex.

Similarly, the fact that human beings have not evolved a perfectly rational cognitive toolkit — that we are mere Homo sapiens and not Homo economicus — is not evidence that our errors have survival value in themselves or that natural selection failed. Rather, it suggests that there is a cost constraint on rationality.

We evolved the ability to think rationally given certain limitations, under certain conditions. It is more reasonable to suppose that benefits of having the cognitive machinery to create goals and commit to them were very large, and the waste and inefficiencies we perceive in the system were not, on average, sufficiently costly in our evolutionary past to justify investing in further refinements in our critical faculties.

It is psychologically costly for us to overcome our own irrationality. This makes some sense since many of our “irrational” biases actually result from taking generally good rules and overusing or misapplying them. It takes work to correct for this, and the benefits have to be large enough to justify that work.

In his book The Myth of the Rational Voter, economist Bryan Caplan makes great use of this fact to explain why people commit such systematic errors in thinking about politics.

As voters, we do not individually pay the price for being wrong — and it feels good to indulge our biases. Thinking critically and breaking from our in-group is difficult. But since no one person will decide the election, there is no real benefit to overcoming our irrationality and a substantial cost to it. As a result, voters are massively biased and ill-informed.

Unlike politics, both natural selection and the market do reliably punish those who indulge in fallacious reasoning. It may not have paid to evolve perfect rationality, but firms in competitive markets that persist in Concorde-like projects eventually fail.

This is why the irrational tendencies of market actors that have been discovered by behavioral economists in the lab are not likely to be corrected by interventions from the political process.

The benefits of being able to set up arbitrary sub-goals — new purposes below the overriding goal of all organisms to reproduce — has obvious survival value, but the tradeoff our ancestral genes faced was between flexibility on the one hand and tenacity on the other.

There’s no guarantee that natural selection will create the perfect strategy for all situations. It simply isn’t true that every behavior is an optimal solution with positive survival value to an existing problem, and it’s a subtle misunderstanding of evolutionary theory to believe that the mere existence of a behavior is proof of its survival value.

But we may tentatively assume that if a trait has survived, then at least it will have been the least costly of available genetic variations to produce the given effect. In other words, we have the cheapest rational mind that natural selection could buy.

If we want to know why the Concorde Fallacy, confirmation bias, and post hoc rationalizations still haunt our primate brains, we must look deeper, to the genetic payoff of building a mind in the first place, and to the cost constraints placed on operating the machinery that catches our errors.

If we want to overcome the irrationality lurking in our primate brains, we must look at the incentives placed on them by our institutions, and we must build institutions that are wiser than we are.

*Addendum: I use words like “know” and “choose” somewhat ill-advisedly; such metaphors are not meant to suggest that wasps are conscious and “thinking.” There is, of course, no reason to believe that the wasps’ nervous system is developed enough to allow consciousness. Dawkins and Brockman were making a point about the tradeoffs that their genes would face in the ruthlessly rational calculator known as natural selection.