More than 201 years ago, Domingos José Martins was shot in Recife, the capital of Pernambuco, a northeastern state in Brazil. His last words, interrupted by his executioners, were “I die for liber...”

His freedom of speech was assaulted in the last moments of his life, and he was unable to finish the word “liberty.”

What we are seeing today is a revival of ideas rooted deeply in our society.

Domingos José Martins is one of many heroes who struggled to promote liberty, helping shape Brazil’s history in the process. A more prosperous, free, and fair society was his ideal, and his story demonstrates that the current upsurge of Brazilians’ interest in freedom and free markets is neither an isolated nor unprecedented phenomenon. What we are seeing today is a revival of ideas rooted deeply in our society.

It’s important for defenders of liberty to go back in history and look for individuals who exude qualities like courage, integrity, and heroism. They can inspire us to act with even more confidence, and for this reason, I present Domingos José Martins' story, paying particular attention to the social context of his time. He was a key figure in one of the greatest popular mobilizations of our colonial period: the Pernambucana Revolution.

The Life of Domingos José Martins

Domingos José Martins was born in 1781 in Marataízes, which is located in the Atlantic coastal state of Espírito Santo. His father commanded a small outpost of the Brazilian military that served to prevent the clandestine landing of slaves and protect travelers from indigenous attacks. When he completed his brief military career, he studied business in the state capital of Vitória (the town where I live today), later finishing his education in Portugal.

After he graduated, Martins moved to London and worked for Dourado Dias & Carvalho, a Portuguese firm. During his stay there, Martins connected with the English liberal (classical, pro-liberty) movement. He embraced its principles, and at first, was hopeful they might be applied to the ongoing French Revolution (which, as we know, took a left turn for the worse). Nonetheless, he proved to be an astute observer of the evolution of liberal ideas in Europe. He hoped the ideas might eventually serve the emancipationist aspirations of Latin Americans chafing under authoritarian rule by the Portuguese and Spanish.

In 1813, at the age of 32, Martins returned to Brazil. He settled in Pernambuco, the wealthiest province in Brazil at the time. It was a city of great political and economic influence. It also had a rich history of popular support for the ideas of liberty; foreign travelers and Brazilians who had lived abroad shared these ideas—as well as books and other publications—with the residents of Pernambuco.

It was in this historical context that Martins saw a fertile climate for the ideals of liberty he revered.

Pernambucan society was ready for revolt. New taxes from the Portuguese crown, a massive Portuguese presence in public administration, and unpopular mercantilist restrictions imposed on maritime commerce all contributed to the growing dissatisfaction. It was in this historical context that Martins saw a fertile climate for the ideals of liberty he revered. He quickly became a well-respected and outspoken leader, gaining great influence throughout the region.

The arbitrary nature of the central government affected the entire population of Pernambuco, who Martins wanted to liberate. Revolution broke out in 1817 when local rebels bearing arms struck against monarchist troops. Meanwhile, Martins led civil and religious leaders, who ultimately managed to dominate the government of Pernambuco and formally proclaim a republic.

In a short period of three months, a constituent assembly was called. It established the separation of powers, allowed freedom of religion, proclaimed freedom of the press, and abolished various taxes. This was an unprecedented development in colonial Brazil.

The end of the revolution came with the deaths of its main leaders, including Domingos Martins.

However, attempts to obtain support from other provinces failed. The young republic was alone in its fight and was eventually violently repressed. Portuguese troops marched to Pernambuco, and the navy blocked the capital’s main port. The revolutionaries were defeated, and their provisional government surrendered. The end of the revolution came with the deaths of its main leaders, including Domingos Martins. They were shot, hanged, and quartered.

Though the Pernambuco Revolution was brief and unsuccessful, its fundamental principles still resonate today. It was in this movement that new ideas began to take hold throughout Brazilian society—ideas such as limited government, free markets, and individual liberty. The young liberal Martins played a very important role in lighting the flame of liberty in Brazil, so much so that the revolution he ignited is considered to be the precursor to Brazilian independence, which came five years later.

The Legacy That He Left

Domingos José Martins now has a city named after him in the mountains of Espírito Santo and is an honorary patron of the state’s civil police. Still, he deserves to be better known, both in the state of his birth (Espírito Santo) and throughout Brazil.

If we succeed, we will achieve our hero's dream: a free Brazil.

I am part of an organization here in Vitória that takes its name from Martins, and we are working to reawaken our fellow Brazilians to his legacy. If we succeed, we will achieve our hero's dream: a free Brazil.

Associates of Groupo Domingos Martins, founded in 2014 by Brazil Students for Liberty’s local coordinators, are active on more than ten university campuses throughout Espírito Santo. We lead student meetings, film screenings, debates, conferences, social mobilizations, and other projects that influence the academic, entrepreneurial and political environments. 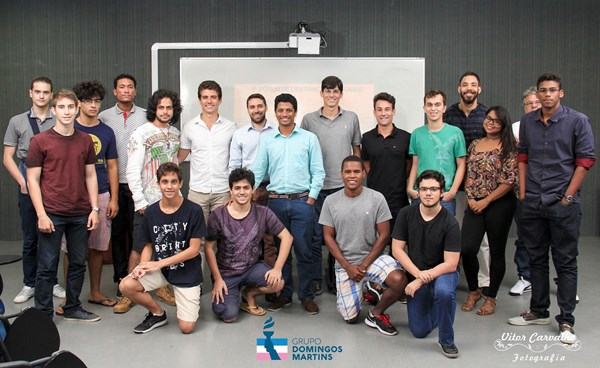 Check us out online:

A former FEE and Cato Institute intern, Pedro Mutzig is from Vitória, Brazil. Pedro has been an activist for liberty in his country, including serving as president of Students for Liberty in his state of Espírito Santo and training more than one hundred young leaders for liberty. Currently, he is a law student and employer in a start-up focused on solving consumer litigation with airline companies, Liberfly.