The Best Defenses of Individualism in One Book

To say I enjoyed this book is an understatement. I loved it. 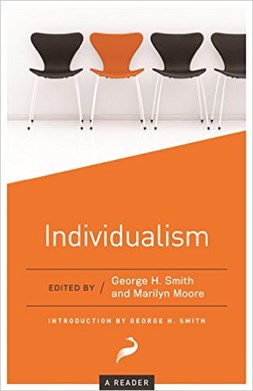 George H. Smith and Marilyn Moore have done a terrific job compiling this varied selection of essays on individualism. Some of the writers may be known to the general public - people like John Stuart Mill, Oscar Wilde, Michel de Montaigne, St. Augustine, Mary Wollstonecraft, and Robert G. Ingersoll. Others may be known to libertarians and anarchists - people like Lysander Spooner, Auberon Herbert and Josiah Warren. But many more are relatively obscure and may be new to the reader. They were to me.

In the introduction by George H. Smith, he discusses the origins of the term and some of its critics. He quotes Tocqueville to the effect that "that word 'individualism' was unknown to our ancestors, for the good reason that in their days every individual necessarily belonged to a group and no one could regard himself as an isolated unit." It was often used as an epithet, a term of derision, and "has retained its negative connotations to this day among both conservative and socialist intellectuals, whose criticisms have much in common."

One whose desires and impulses are not his own has no character, no more than a steam-engine has character.

The essays themselves range from a short two pages to twenty-nine pages. There are twenty-six altogether, all by different authors. The quality of the essays vary. A few are a bit arcane, but the vast majority are lucid to the modern reader. And more than a few are brilliant and inspiring.

One of the early essays to impress me was "Of Individuality, As One of the Elements of Well-being" by John Stuart Mill. It's one of the chapters from his famous book, On Liberty. In it, he gives a resounding defense of eccentricity, the right to be different. And more, the importance of letting people be different. It is what defines character and sometimes genius. "One whose desires and impulses are not his own, has no character, no more than a steam-engine has character. If, in addition to being his own, his impulses are strong, and are under the government of a strong will, he has an energetic character. Whoever thinks that individuality of desires and impulses should not be encouraged to unfold itself, must maintain that society has no need of strong natures - is not the better for containing many persons who have such character - and that a high general average of energy is not desirable."

The book only gets better from there. I particularly enjoyed the following:

To say I enjoyed this book is an understatement. I loved it. It explores the entire range of individualist thinking including individuality, property, self-sovereignty, the rights of women, the proper use of force in society, free thought and more.

I leave you with this excerpt The Dominant Idea by individualist-feminist Voltairine de Cleyre in which she urges people to commit to the cause of freedom and not be seduced by the dominant idea of her age, materialism. Make freedom your dominant idea. This call to arms would actually have made a good closing essay for the book rather than being included in the section on social individualism.

"If you choose the liberty and pride and strength of the single soul, and the free fraternization of men, as the purpose which your life is to make manifest, then do not sell it for tinsel. Think that your soul is strong and will hold its way; and slowly, through bitter struggle perhaps, the strength will grow. And the foregoing of possessions for which others barter the last possibility of freedom, will become easy.