How to Make Racial and Gender Equity Look Inequitable

When we fail to define “equal,” we won’t know whether we’ve achieved equity, as a recent report from the Minnesota Census of Women in Corporate Leadership demonstrates.

Calls for racial and gender equity rarely outline how true equity might look, or when those calls can stop. That can be a problem in places like Minnesota, a predominantly white state where true equity can be deceiving.

The Minnesota Census of Women in Corporate Leadership has critiqued the demographics of the state’s business leaders for more than a decade. The subtitle of the 2020 edition explains that, “Overall, women are making slow but steady progress into corporate leadership positions, but BIPOC [Black, Indigenous, and Persons of Color] women are being left behind.”

The claim that women of color are being left behind unravels after a little homework, however.

A Statistical Misstep: What’s Half of 49?

As evidence for women’s “slow but steady progress,” the Census notes that 47 percent of new board members at Minnesota’s largest public companies were women. But 47 percent – 23 women out of 49 appointments – is just one or two away from 50 percent. Just like how flipping a coin doesn’t always result in exactly 50 percent heads and 50 percent tails, appointing 49 people at random from the population could easily yield a 23-26 mix of women and men.

In fact, a 23-26 mix is statistically indistinguishable from random selection, or 50 percent (p = 0.39 by one-tailed, one-proportion z-test). That’s not “slow progress,” as the report’s cover claims – that’s one way that full gender parity can look, and it’s happening right now.

The Census is an attractive document filled with colorful infographics and charts, but this newfound nugget of non-discrimination sits unheralded at the end of a plain-text paragraph on page 3: “Minnesota companies demonstrated their commitment to gender diversity by appointing women to 46.5 percent of new director positions.”

There’s no mention of how that number, statistically speaking, practically equates to a 50-50 split.

The Census switches from deemphasizing gender equity that does exist to emphasizing racial inequity that does not exist, at least as advertised. Under a bold heading stating that “Women of Color are Left Behind” (p. 3), the Census lays out its case:

Advancement of women, however, remained unbalanced. As in 2019, the surge of women director appointments in 2020 benefited primarily white women. Women of color secured only four of the 23 new women director positions….

Four women of color out of 23 does seem “unbalanced,” but how would “balance” look?

If 23 women became directors at Minnesota’s biggest companies, how many of them would we expect to be women of color?

Four, it turns out. A closer look at the demographics of Minnesota shows that about 83 percent of women ages 35-64 – the age range that would probably include most new directors – are white. This means that the other 17 percent are women of color. Seventeen percent of 23 is … wait for it … four (3.9, actually).

To muddy the waters further, the Census misrepresents its own findings. Its own data show that women of color are about 4 percent of all board members, but its “feature story” (pp. 9-12) describes that number as 4 percent of female board members (p. 9). In doing so, the Census misreports that white women outnumber women of color by a margin of 24:1, which is demonstrably, laughably false.

Unfortunately – but perhaps predictably – that mistake became the handpicked lede of a feature story about the Census in a progressive publication, the Minnesota Reformer. The mistake found its way into the story’s third paragraph – the first statistic presented about race. The error also headlined the story’s marketing on social media. 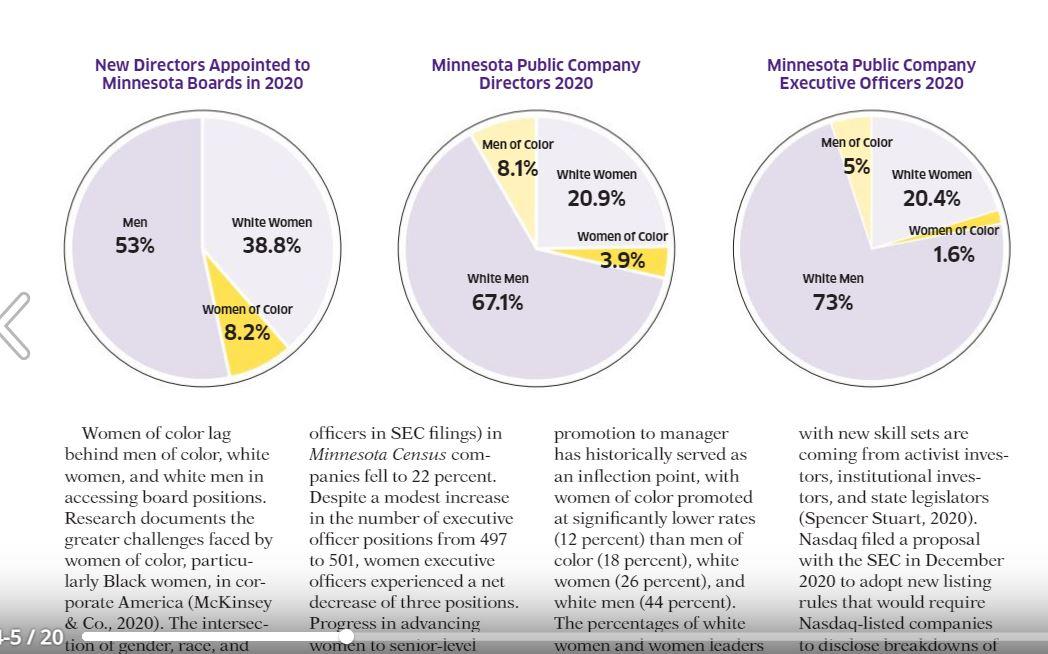 Interestingly, the mistake is plainly contradicted by data that are featured prominently throughout the Census, including a pie graph on the fourth page (see above), a narrative summary (p. 3), and a summary bullet point (p. 7). When asked to comment on the error, the authors of the Census and the Reformer article either declined or did not reply. The Reformer itself said that it would “investigate and correct as needed,” though no changes had been made to the article or social-media posts three days later.

So, after a little digging, we realize that practically half of Minnesota’s new board members are women, and that women of color are represented exactly as one would expect. This is not “unbalanced,” as the Census claims, nor did board appointments “benefit primarily white women,” at least beyond the extent that women in Minnesota are primarily white.

Equity and the Base-Rate Fallacy

The statistical missteps in the Census follow a pattern of poor reasoning known as the base-rate fallacy, a logical error involving an inappropriate comparison (for example, implicitly defining equity as a 50/50 racial split among female directors even though there are significantly more white women than black women in the state). Because the Census failed to define equity properly, it could not accurately measure whether equity had been achieved.

The first misstep was failing to rigorously test whether the share of female appointees had met the (unstated) goal of 50 percent. Curiously, the number of new appointees was odd (49), meaning that a perfect 50-50 gender equity was impossible. It may sound glib, but what split would have satisfied the report’s authors? 24-25? 25-24? Because the standard for “equity” was never defined for a sample of that size, one can reasonably wonder in good faith.

Similarly, when making comparisons involving race, the authors of the Census failed to account for geography. If they had defined an appropriate base rate for comparison within a predominantly white state in the U.S., they would have realized that goals for “equity” had already been met for new board members – and right on the nose (four out of 23), with no statistical test required.

In the name of fairness, it’s worth mentioning that the Census attempted to make some more accurate demographic comparisons (p. 9), but two critical mistakes rendered them moot: misreporting the percentage of BIPOC women by a factor of two (which is similar to the 24:1 mistake above), as well as failing to correct for age (an important factor in a state where so much of the BIPOC population is under 30).

The report’s authors also succumb to the base rate fallacy in other ways. In one instance, the Census compares the demographics of business executives to the population generally (p. 4), not the pool of potential executives. That is, it makes no mention of how the pool of MBAs is overwhelmingly male, probably for reasons other than discrimination.

Another instance fails to account for the lag time of gradual demographic shifts in general. In the Reformer piece, the lead author of the Census laments how boards of directors are still overwhelmingly male, never mentioning the recent parity in new board members that’s revealed above. Slow turnover of a majority-male profession like business leadership can disguise equity today. The only way to quicken progress further would be to overcorrect and actively discriminate against men.

Again, both of these errors are flavors of the base-rate fallacy, which is sadly prevalent among calls for equity generally. When we fail to define “equal,” we won’t know whether we’ve achieved equity. As a result, calls of discrimination can outlast real discrimination.

A closer look at the numbers reveals that it might be happening already. In some cases, equity can look inequitable.

P. A. Jensen (@P_A_Jensen) writes about politics, sports, and rural life at RuralityCheck.com.