The Absurd World of Agriculture Subsidies

I've argued that HUD should be the first to go, but I may change my mind in favor of the Department of Agriculture.

I’ve argued before that the Department of Housing and Urban Development (HUD) should be the top target of those seeking to shut down useless and counterproductive parts of the federal government.

And if President-Elect Trump’s choice for HUD Secretary, Ben Carson, is as sound on housing issues as he is on tax issues, presumably he will work to close down the bureaucracy that he’ll soon be overseeing.

But I just read a Wall Street Journal column about agriculture subsidies that has me so agitated that I may change my mind and make the Department of Agriculture my top target for elimination. Here’s some of what Jim Bovard wrote:

President-elect Donald Trump’s vow to “drain the swamp” in Washington could begin with the Agriculture Department … Farmers will receive twice as much of their income from handouts (25%) this year as they did in 2013, according to the USDA … big farmers snare the vast majority of federal handouts. According to a report released this year by the Environmental Working Group … “the top 1 percent of farm subsidy recipients received 26 percent of subsidy payments between 1995 and 2014.” The group’s analysis of government farm-subsidy data also found that the “top 20 percent of subsidy recipients received 91 percent of all subsidy payments.” Fifty members of the Forbes 400 list of wealthiest Americans have received farm subsidies, according to the group, including David Rockefeller Sr. and Charles Schwab.

Indeed, agriculture subsidies are basically a huge transfer of wealth from the poor to the rich.

In his column, Jim also explains some of the bizarre consequences of various specific handout programs, including the fact that American taxpayers have forked over $750 million to Brazil in order to continue huge (and impermissible, according to our trade commitments) subsidies to American cotton producers.

But the sugar subsidies are probably the most economically insane.

The U.S. maintains a regime of import quotas and price supports that drive U.S. sugar prices to double or triple the world price. Since 1997 Washington’s sugar policy has zapped more than 120,000 U.S. jobs in food manufacturing, according to a 2013 study by Agralytica. More than 10 jobs have been lost in manufacturing for every remaining sugar grower in the U.S.

Let’s look at some more evidence, this time dealing with dairy subsidies.

… as of March 31, 1.19 billion pounds had accumulated in commercial cold-storage freezers across the United States, the largest stockpile ever. …each American would have to eat an extra 3 pounds of cheese this year, on top of the 36 pounds we already consume per capita, to eliminate the big yellow mountain.

Why is there something as silly as a giant stockpile of cheese?

If you’re guessing it’s the result of a foolish government policy, you’d be right.

… the U.S. government has a long-standing pro-cheese-eating policy, which grew out of the need to do something with the subsidized excess of milk products generated by federal pro-production dairy policy… Two decades ago, in fact, the Clinton administration’s Agriculture Department helped form a promotional organization, Dairy Management Inc., funded by a congressionally authorized, federally collected dues requirement for dairy producers. Its $140 million annual budget has helped develop such fast-food items as Pizza Hut’s cheese-topped crust and Taco Bell’s double steak quesadillas, as well as cheesy pizzas for the federal school lunch program. …dairy farms are protected by a subsidized insurance program in the 2014 Farm Bill.

What’s the answer to this mess?

Well, even an editorial writer for the leftist Washington Post recognizes that markets, rather than subsidies, should determine cheese production.

In the long run, everyone — consumers, producers, middlemen, grocers — would probably be better off if governments just left the dairy market to its own devices. And a lot of other markets, too.

By the way, since we’re on the topic of subsidies to the dairy industry, a Bloomberg column exposes some of the perverse consequences of government intervention.

… some farmers tried to limit the supply of milk by killing off their own cows. No, you read that correctly. This mysterious state of affairs was revealed in a nationwide class-action lawsuit against dairy cooperatives, groups of farmers who pool their supplies but, as a whole, serve as middlemen between the farmers and dairy processors … The “herd retirement program,” as it was called, was led by Cooperatives Working Together, run by the lobbying group National Milk Producers Federation, and supported by farms producing almost 70 percent of America’s milk … The path that leads to killing perfectly good dairy cows begins with a 1922 law, the Capper-Volstead Act. The statute was designed to protect both dairy farmers and consumers from profiteering middlemen.

This story actually is a perfect storm of government stupidity. The federal government has programs that subsidize the dairy industry. That then leads to overproduction. Producers respond to overproduction with a plan to kill cows, which somehow triggers antitrust intervention by the government.

Heaven forbid we actually get the government out of the business and simply allow markets to work!

The Obama administration’s plan to dump a million pounds of surplus peanuts into Haiti at no cost has sparked a firestorm from humanitarian groups … Haiti has about 150,000 peanut farmers. The industry is “a huge source of livelihood” for up to 500,000 people, Claire Gilbert of Grassroots International told NPR, “especially women, if you include the supply chains that process the peanuts.” …the Peasant Movement of Papaye, denounced the peanut donation as “a plan of death” for the country’s farmers … American aid has a sordid record. In 1979 a development consultant told a congressional committee: “Farmers in Haiti are known to not even bring their crops to market the week that [food aid] is distributed since they are unable to get a fair price while whole bags of U.S. food are being sold.” … After the 2010 earthquake, Haiti’s president, René Préval, pleaded with the U.S. to “stop sending food aid so that our economy can recover and create jobs.” Former President Bill Clintonpublicly apologized the same year for the devastating impact of subsidized U.S. rice imports: “I have to live every day with the consequences of the lost capacity to produce a rice crop in Haiti to feed those people, because of what I did.”

The peanut program may be even more inanely destructive than the sugar program.

The real culprit here are federal peanut programs with an almost 80-year record as one of Washington’s most flagrant boondoggles. Subsidies have encouraged farmers to overproduce and then dump surplus peanuts on the USDA, which winds up stuck with hundreds of millions of pounds. That food has to go somewhere, and the department sees Haiti as the ticket. Food-aid policies have long been driven not by altruism, but by bureaucratic desperation to dispose of the evidence of failed farm policies … The cost of peanut subsidies is predicted to rise 10-fold between 2015 and next year, reaching $870 million—which approaches the total farm value of the whole U.S. peanut crop itself. The USDA expects to spend up to $50 million a year to store and handle surplus peanuts, and industry experts are warning that federally-licensed warehouses might not have enough space to hold the next crop.

Though this humorous image reminds me that ethanol handouts also may be the most counterproductive and wasteful agriculture subsidy. 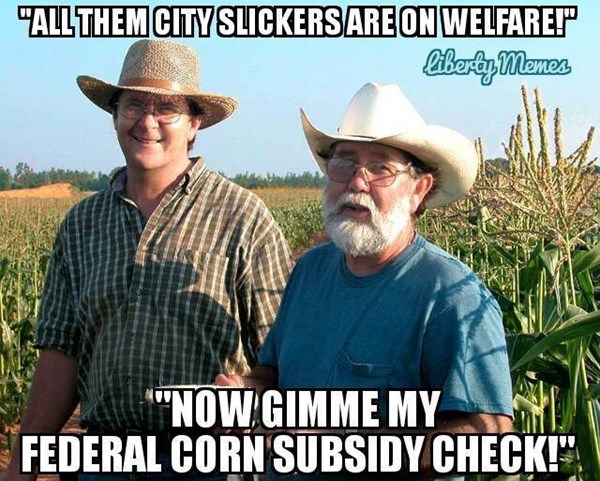 Agriculture subsidies are bad for taxpayer and bad for consumers. They are a corrupt transfer of unearned wealth to special interest groups.

P.J. O’Rourke came up with the only appropriate solution to this mess.