Thanos is just the latest in a long line of population growth alarmists, and he's just as wrong as they were.

This video from the Foundation For Economic Education discusses why advocates of population control keep wrongly predicting doom, from 18th-century economist Thomas Malthus to the Stanford professors who wrongly predicted "The Population Bomb" in the 1960s, to the villain in Marvel's Avengers: Infinity War, Thanos.

In that film, the bad guy sought to magically destroy half the life in the universe to preserve enough resources for the other half. The video points to a probably-tongue-in-cheek Reddit community called "Thanos Did Nothing Wrong" which gained 188,000 subscribers in the four months after the movie came out. Killing trillions of people is obviously evil, as explained by the heroes in the movie, but this line of thinking seems to be popular in real life anyway: Why is that?

"The universe is finite, its resources finite, if life is left unchecked, life will cease to exist," Thanos said in the film, echoing countless villains before him. "It needs correction... I am the only one who knows that. At least I'm the only one with the will to act on it."

The video ignores the question of why, if he has infinite power, wouldn't Thanos just double the resources instead of cutting the population in half, but there are many people who agree with Thanos that there are too many people on Earth. Hopefully, none of them will ever have magic powers to act on it, but since the 1798 publication of "An Essay on the Principle of Population" by Thomas Malthus, religions, corporations, and even governments have worked to reduce human populations. 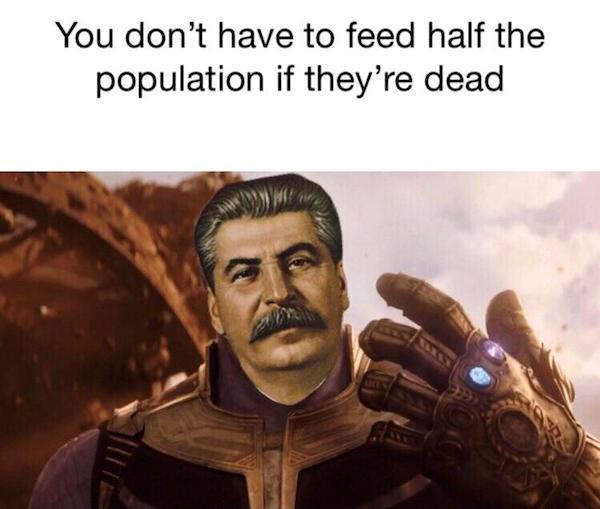 "Malthus believed that human vices, murder, disease, and even warfare were holding back the tide of an even greater catastrophe," the video explains.

In the same essay, he predicted that if the population increased at a constant rate, the world would add one billion people every 25 years. If he had been right, there would be about 10 billion people in the world by now, though there are only 7.6 billion. Malthus wasn't right, but his ideas caught on.

As long as people are free to be entrepreneurial and explore new ideas, in a context where other people are also free to decide for themselves which innovations are valuable to them, wealth will increase. And that is exactly what has happened in real life, whenever there are property rights, low barriers to entrepreneurship and free trade.

Tim Hains is an editor at RealClearPolitics.