Thank Capitalism for the Weekend!

Every year or two, we see renewed calls for laws mandating a 30-hour workweek. The latest is by Harlan Green, editor of populareconomics.com. It’s time to put this issue to bed: laws mandating a shorter workweek hurt the very workers they intend to help.

The idea that we need maximum-workweek laws to protect workers is a myth: capitalism has driven down worker hours even in the absence of such laws. Economist Robert Whaples notes that the average workweek has been decreasing since the 1830s.

By 1938, when President Roosevelt signed the Fair Labor Standards Act (FLSA) mandating a 40-hour workweek, such a law was virtually unnecessary. Over the previous century, market forces had driven the average manufacturing workweek from almost 70 hours to just over 50. Other industries were even lower. In 1930, for instance, railroad workers worked an average of 42.9 hours per week. Coal miners worked an average of only 27 hours.

This shift wasn’t the product of labor legislation. The few scattered wage laws the United States had before the FSLA were rendered largely unenforceable by the Lochner-era Supreme Court, which recognized the legality of any employee-employer contract, regardless of how many hours it was for.

The truth is that employees aren’t powerless. In a competitive marketplace, they can negotiate with their boss, knowing that if they don’t like the deal he offers than they can move to a different company.

What kept workweeks long in the 19th century was the same thing that pushed farmers to employ their children: productivity was low, and people had to work 70-80 hours if they wanted to produce enough to keep food on the table. This was not the fault of exploitative employers, unless parents count as exploitative. It was the fault of an underdeveloped economy.

As productivity and wages rise, employees can live on less labor, which gives them an incentive to negotiate — successfully, as we’ve seen — for a lower workweek.

But if exploitation isn’t keeping the workweek long, why hasn’t it continued to shrink since 1938?

One factor is that wages have been rising (contra the claims of progressives), which increases the opportunity cost of not working. Employees are choosing to work more and buy more goods rather than have more free time. Rising wages make the prospect of working more hours more attractive than it used to be.

Another is that the workweek is shrinking, and companies like Treehouse are experimenting with a 32-hour workweek. 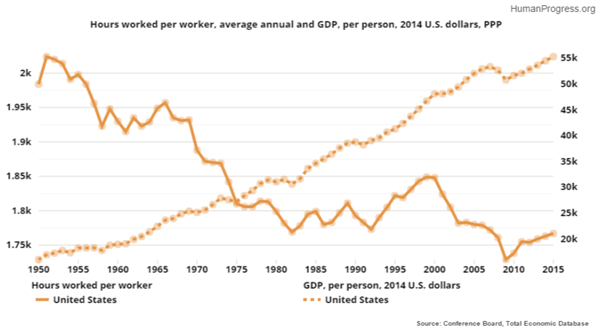 So maximum-workweek laws don’t help workers. But it’s worse than that: such regulations actually hurt workers’ ability to earn a living.

Workers are paid based on what they produce, and if they’re not working as much, they aren’t producing as much and can’t earn as much. Maximum-hour laws reduce the ability of workers to boost their incomes by working more hours and producing more.

This is something that labor organizers have long known. Terence Powderly, president of the Knights of Labor in the 1880s, noted that employees didn’t actually want shorter hours if it decreased their daily pay, but that was the trade-off that strikes and labor laws created.

Proponents of maximum-workweek laws argue that they create more jobs by spreading the work around. Writing for the Nation, Michelle Chen argues that, “A study by the National Retail Federation concedes that the overtime reforms [which essentially enforce the FLSA’s 40-hour workweek] will have a job creating effect by encouraging new hiring.”

If employers can squeeze John for 60 hours a week, they will; but if they can only make him work 40, then they’ll be forced to hire someone else to help John.

This is wrong for two reasons. The worker hired to help John won’t be as efficient as John (if he were, the employer would have hired him anyway), so transferring work from John to the new hire will make the firm less efficient. That could mean higher prices, less production, less ability to expand, or all three.

Moreover, this only helps the unemployed at the expense of the employed. If John wanted or needed the hours, tough luck for him, since he just took an involuntary 33 percent pay cut to hire the new guy.

If we want to create jobs, there are better ways than negative-sum games that punish both workers and businesses.

A 30-hour week is not impossible or even necessarily undesirable. But if we want to help workers, we’ll let them decide when and how take us there, not politicians.

Julian is a former political op-ed writer and current nonprofit marketer. His work has been featured in FEE, National Review, Playboy, and Lawrence Reed's economics anthology Excuse Me, Professor.