With the debate ongoing, it might be useful to examine how other countries have dealt with similar policy debates in the past.

New Zealand now ranks third in The Heritage Foundation’s Index of Economic Freedom and is one of the champions of economic freedom around the world. But it wasn’t always so.

In the mid-1980s, New Zealand was facing an economic crisis, with its domestic market and international trade both heavily regulated. Unemployment had reached 11 percent, and inflation was a sky-high 15 percent.

In response, the government of New Zealand began implementing revolutionary economic reforms, most significantly related to trade policy. It announced in 1987 a program that would reduce the tax on imports to under 20 percent by the year 1992.

By 1996, that tax was reduced further to under 10 percent, and by the end of 1999, about 95 percent of New Zealand’s tariffs were set at zero. Successive New Zealand governments, whether conservative or liberal, have maintained the strong commitment to free trade.

As the following chart illustrates, New Zealand's adoption of less restrictive trade policies has corresponded to its climb up the trade-freedom scale in the Index of Economic Freedom, and with a huge boost in per capita gross domestic product. 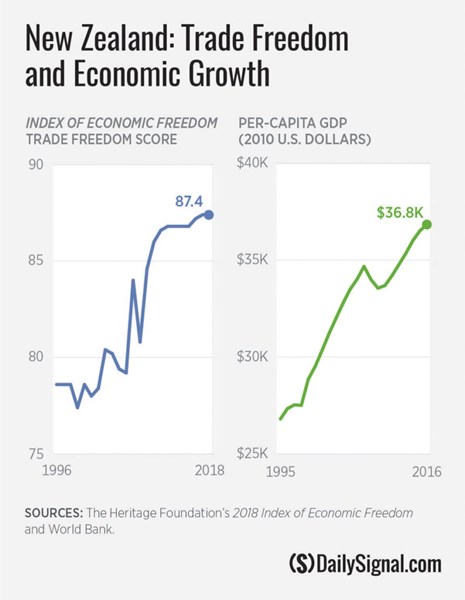 The United States could take a page out of New Zealand’s trade-policy book and implement the same type of reductions in tariffs, negotiate bilateral free-trade agreements with key trading partners, and ensure a competitive market for the trade of goods and services.

That would enhance innovation and economic freedom—and grow our economy.