Stripping off the Gray Flannel Suit

Sloan Wilson’s The Man in the Gray Flannel Suit  is one of those business novels about which everyone has heard—especially since it was referenced on Mad Men—but which almost no one reads any more. This is a shame because the most common descriptions of  it in the press and online are not particularly accurate. Bob Greene famously referenced it as “a ground-breaking fictional look at conformity in the executive suite, and it was a piece of writing that helped the nation’s business community start to examine the effects of its perceived stodginess and sameness,” and the Wikipedia entry, among other inaccuracies, calls it a novel about “the American search for purpose in a world dominated by business.”

Wilson’s novel is far better and more subtle than these descriptions give it credit for. Even labeling it a “business book” is something of an injustice. Amid the discussions of business, The Man in the Gray Flannel Suit also contains substantial portrayals of war and the difficulties experienced by soldiers and their families during the return to civilian life, the rapid social changes of 1950s America, and some fascinating ruminations on the nature of justice and law.

That said, the novel is best known as a business book, and as one that deals with questions of conformity. While the hero, Tom Rath, fears that “I am just a man in a gray flannel suit. I must keep my suit neatly pressed like anyone else, for I am a very respectable young man,” the novel goes out of its way to show that he is not such a man, that he need not be such a man, and that innovation and entrepreneurship, combined with a little soundness of character, will keep him from becoming such a man. 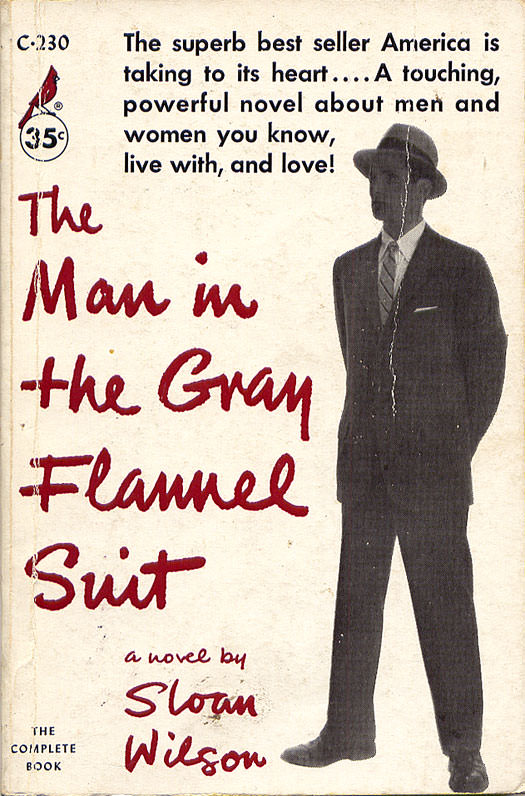 A veteran of World War II, Tom came home and became an assistant to the director of an arts and science research foundation. The position, arranged for him by his wealthy and well-connected grandmother, allows him to buy a small house and provide for his wife and three children, but as the novel begins the small house and the small salary have begun to pinch. When a friend tells Tom about a job opening in public relations at the United Broadcasting Company, Tom and his wife Betsy leap at the chance, though they both express concerns about whether Tom will be suited for the work.

Tom works hard to fit himself into the mold of “the man in the gray flannel suit,” which he believes is crucial for success. As he works on draft after draft of a speech for the head of the company he becomes increasingly persuaded that the only way to succeed in business is to become a cipher. “My business education, you see, is not complete. In a few years I’ll be able to suspend judgment entirely until I learn what Hopkins [the boss] thinks, and then I’ll really and truly feel the way he does. That way I won’t have to be dishonest any more.” His wife Betsy (frequently misrepresented by critics as “shallow and materialistic”) is horrified by this suggestion that success requires such a betrayal of self. “I don’t like the idea of your becoming a cheap, cynical yes-man and being so self-satisfied and analytical about it.”

Indeed, when Tom eventually decides to be honest with his boss about the speech, it is the beginning of a new camaraderie and respect between the two men that eventually leads to more promising job opportunities for Tom.

But the most interesting part of The Man in the Gray Flannel Suit is a narrative that runs parallel to the story of Tom’s struggles in the business world. At the same time that Tom is adapting—first poorly and then more successfully—to his post-war entry into the business world, he and his wife are becoming entrepreneurs. When Tom’s grandmother dies, she leaves him virtually no money and an enormous and dilapidated family mansion on 23 acres of land with a view of Long Island Sound.  The house is too run down to live in for long, and would be cripplingly expensive to repair and maintain. Betsy is clever enough to come up with a plan for this white elephant of an inheritance:

Let’s say we took all our available money, from selling this place and from Grandmother’s estate and everything. Let’s say we took it all and converted Grandmother’s carriage house into a dwelling . . . Let’s say we did that and sold it with one acre of land for forty thousand dollars. Places like that go for at least that, and I bet we could fix the old carriage house up for twenty thousand. That would give us a profit of twenty thousand. We could use that to build another house and sell that for profit. We could put up a whole housing development, one house at a time.

Betsy commits to learning the real estate business and trying to contact the zoning board, and challenges the reluctant Tom for being “a coward” who is afraid of risk and who has “got no guts.”

As the novel ends, Tom has used his business and social skills to find a better job and he and Betsy are waiting in happy anticipation for zoning board approval. The man in the gray flannel suit has broken out of the mold. But he didn’t do it by eschewing the world of business. He did it by finding a kind of business to which his resources were more suited. He did it by having the good sense to marry a woman with entrepreneurial instinct and the bravery to take a chance on her optimistic vision of a world of possibility.

The Man in the Gray Flannel Suit is not about “the American search for purpose in a world dominated by business,” not if we are meant to assume that the ideas of “purpose” and “business” are intrinsically opposed within the novel. Instead, it is about finding a way to do business with a purpose and to be all the better because of it.