Still Waiting for Republicans to Drain the Swamp

Is the red team going to do anything about excessive red tape?

On major economic issues, it does not appear that Republican control of Washington makes much of a difference.

Let’s see whether we get a different story when we examine regulatory issues.

We’ll start with some good news. Well, sort of. It seems the United States has the largest and 4th-largest GDPs in the world.

You may think that makes no sense, but this is where we have to share some bad news on the regulatory burden from the Mercatus Center. 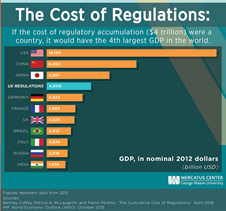 Economic growth has been reduced by an average of 0.8 percent per year from 1980 to 2012 due to regulatory accumulation. Regulations force companies to invest less in activities that enhance productivity and growth, such as research and development, as companies must divert resources into regulatory compliance and similar activities....Compared to a scenario where regulations are held constant at levels observed in 1980, the study finds that the difference between the economy we are in and a hypothetical economy where regulatory accumulation halted in 1980 is approximately $4 trillion. …The $4 trillion dollars in lost GDP associated with regulatory accumulation would be the fourth largest economy in the world—larger than major countries like Germany, France, and India.

By the way, this data from Mercatus gives me an opportunity to re-emphasize the importance of even small variations in economic growth. It may not make that much difference if the economy grows 0.8 percent faster or slower in one year.

But, as just noted, a loss of 0.8 percent annual growth over 32 years has been enormously expensive to the U.S. economy.

The Competitive Enterprise Institute has a depressing array of data on America’s regulatory burden. Here’s the chart that grabbed my attention. 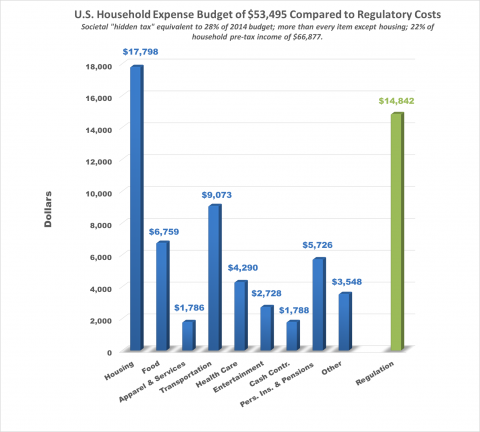 And here’s a video on the burden of red tape from the folks at CEI.

Who deserves the blame for this nightmare of red tape?

The previous president definitely added to the regulatory morass. The Hill reported last year on a study by the American Action Forum.

The Obama administration issues an average of 81 major rules, those with an economic impact of at least $100 million, on a yearly basis, the study found. That’s about one major rule every four to five days, or, as the American Action Forum puts it, one rule for every three days that the federal government is open. “It is a $2,294 regulatory imposition on every person in the United States,” wrote Sam Batkins, director of regulatory policy at the American Action Forum, who conducted the study.

And there was a big effort to add more red tape in Obama’s final days, as noted by Kimberly Strassel of the Wall Street Journal.

Since the election Mr. Obama has broken with all precedent by issuing rules that would be astonishing at any moment and are downright obnoxious at this point. This past week we learned of several sweeping new rules from the Interior Department and the Environmental Protection Agency, including regs on methane on public lands (cost: $2.4 billion); a new anti-coal rule related to streams ($1.2 billion) and renewable fuel standards ($1.5 billion).

As you might expect, the net cost of Obama’s regulatory excess is significant. Here’s some of what the Washington Examiner wrote during the waning days of Obama’s tenure.

According to new information from the White House, finally released after a two year wait, the total burden of federal government paperwork is more than 11.5 billion man-hours a year. That’s almost 500 million man-days, or 1.3 million man-years. More importantly, it’s 35 hours every person in the country (on average) has to spend doing federal paperwork every year, on average. …Time is money, and paperwork time alone costs the country almost $2 trillion a year, or about 11 percent of GDP.

But it’s not solely Obama’s fault. Not even close.

Both parties can be blamed for this mess, as reported by the Economist.

The call to cut red tape is now an emotive rallying cry for Republicans—more so, in the hearts of many congressmen, than slashing deficits. Deregulation will, they argue, unleash a “confident America” in which businesses thrive and wages soar, leaving economists, with their excuses for the “new normal” of low growth, red-faced. Are they right?

They may be right, but they never seem to take action when they’re in charge.

Between 1970 and 2008 the number of prescriptive words like “shall” or “must” in the code of federal regulations grew from 403,000 to nearly 963,000, or about 15,000 edicts a year… The unyielding growth of rules, then, has persisted through Republican and Democratic administrations… The endless pile-up of regulation enrages businessmen. One in five small firms say it is their biggest problem, according to the National Federation of Independent Business.

Though I would point out that President Reagan was the exception to this dismal rule. 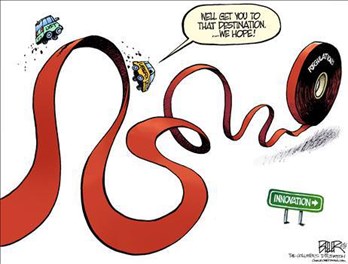 That being said, who cares about finger pointing? What matters is that the economy is being stymied by excessive red tape.

So what can be done about this? President Trump has promised a 2-for-1 deal, saying that his Administration will wipe out two existing regulations for every new rule that gets imposed.

Susan Dudley opines on this proposal, noting that Trump hasn’t put any meat on the bones.

Like pebbles tossed in a stream, each individual regulation may do little economic harm, but eventually the pebbles accumulate and like a dam, may block economic growth and innovation. A policy of removing two regulations for every new one would provide agencies incentives to evaluate the costs and effectiveness of those accumulated regulations and determine which have outlived their usefulness. Mr. Trump’s statement doesn’t provide details on how this new policy would work.

Ms. Dudley points out, however, that other nations have achieved some success with similar-sounding approaches.

…his team could look to experiences in other countries for insights. The Netherlands, Canada, Australia and the United Kingdom have all adopted similar requirements to offset the costs of new regulations by removing or modifying existing rules of comparable or greater effect. …The Netherlands program established a net quantitative burden reduction target that reduced regulatory burdens by 20% between 2003 and 2007. It is currently on track to save €2.5 billion in regulatory burden between 2012 and 2017 by tying the introduction of new regulations “to the revision or scrapping of existing rules.” Under Canada’s “One-for-One Rule,” launched in 2012, new regulatory changes that increase administrative burdens must be offset with equal burden reductions elsewhere. Further, for each new regulation that imposes administrative burden costs, cabinet ministers must remove at least one regulation. Similarly, Australia’s policy is that “the cost burden of new regulation must be fully offset by reductions in existing regulatory burden.” The British began with a “One-in, One-out” policy, requiring any increases in the cost of regulation to be offset by deregulatory measures of at least an equivalent value. In 2013, it moved to “One-in, Two-out” (OITO) and more recently to a “One-in, Three-out” policy in an effort to cut red tape by £10 billion.

The bottom line is that progress will depend on Trump appointing good people. And on that issue, the jury is still out.

The legislative branch also could get involved.

In a column for Reason, Senator Rand Paul explained that the REINS Act could make a big difference.

…13 of the 15 longest registers in American history have been authored by the past two presidential administrations (Barack Obama owns seven of the top eight, with George W. Bush filling in most of the rest)…federal lawmakers should pass something called the REINS Act—the “Regulations from the Executive in Need of Scrutiny Act. The REINS Act would require every new regulation that costs more than $100 million to be approved by Congress. As it is now, agencies can pass those rules unilaterally. Such major rules only account for about 3 percent of annual regulations, but they are the ones that cause the most headaches for individuals and businesses. …the REINS Act did pass the House on four occasions during the Obama administration. Lack of support in the Senate and the threat of a presidential veto kept it from ever reaching Obama’s desk.

But would it make a difference if Congress had to affirm major new rules?

Given how agencies will lie about regulatory burdens, it wouldn’t be a silver bullet.

But, based on the hysterical opposition from the left, I’m betting the REINS Act would be very helpful.

REINS would fundamentally alter the federal government in ways that could hobble federal agencies during periods when the same party controls Congress and the White House — and absolutely cripple those agencies during periods of divided government. Many federal laws delegate authority to agencies to work out the details of how to achieve relatively broad objectives set by the law itself. …REINS, however, effectively strips agencies of much of this authority.

That sounds like good news to me. If the crazies at Think Progress are this upset about the REINS Act, it must be a step in the right direction.

Let’s close with a bit of evidence that maybe, just maybe, Republicans will move the ball in the right direction. Here are some excerpts from a Bloomberg story.

The White House estimates it will save $10 billion over 20 years by having rescinded 11 Obama-era regulations under a relatively obscure 1996 law that lets Congress fast-track repeal legislation with a simple majority. …In all, the law has been used to repeal 11 rules, with two more awaiting the president’s signature… About two dozen measures with CRA’s targeting them remain, but because the law can only be used on rules issued in the final six months of the previous administration, Congress only has only a few more weeks to use the procedure. 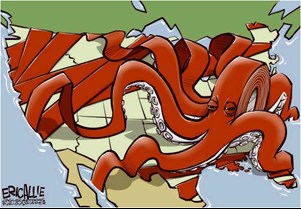 Before getting too excited, remember that the annual cost of regulation is about $2 trillion and the White House is bragging about actions that will reduce red tape by $10 billion over two decades. Which means annual savings of only $500 million.

Which, if my math is right, addresses 0.025 percent of the problem.

I’ll take it, but it should be viewed as just a tiny first step on a very long journey.

P.S. The Congressional Review Act was signed into law by Bill Clinton. Yet another bit of evidence that he was a surprisingly pro-market President.