Recent reports that infants now die at a higher rate in Venezuela than in war-torn Syria were, sadly, unsurprising – the results of socialist economics are predictable.

Recent reports that infants now die at a higher rate in Venezuela than in war-torn Syria were, sadly, unsurprising – the results of socialist economics are predictable. Venezuela’s infant mortality rate has actually been above Syria’s since 2008. 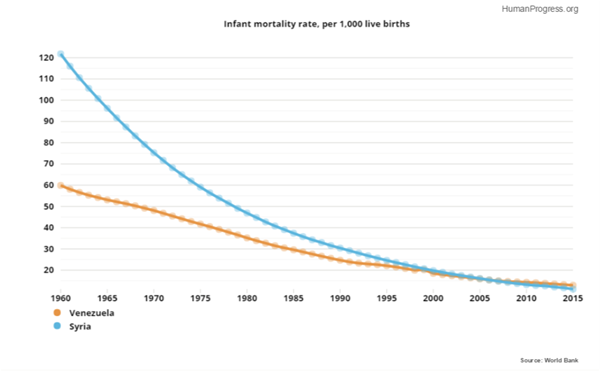 The big picture, fortunately, is happier. The global infant mortality rate has plummeted. Even Syria and Venezuela, despite the impact of war and failed policies, saw improvements up to as recently as last year. From 1960 to 2015, Syria’s infant mortality rate fell by 91% and Venezuela’s by 78%. This year (not reflected in the graph above or below), Syria’s rate rose from 11.1 per 1,000 live births to 15.4, while Venezuela’s shot up from 12.9 to 18.6. Meanwhile, infant mortality rates have continued to fall practically everywhere else, and have declined even faster in countries that enjoy more freedom and stability. Consider Chile. 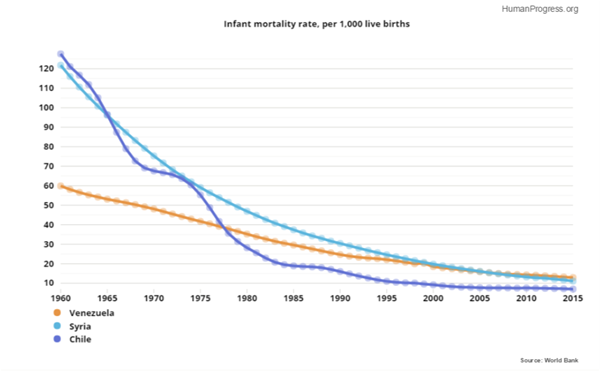 Chile’s infant mortality rate in 1960 was actually above that of both Venezuela and Syria. It managed to outperform Syria by the mid-1960s, but was still woefully behind its richer northern cousin, Venezuela.  In the early 1970s, Chile’s progress slowed to a crawl as its elite flirted with socialist policies. Once its government abandoned socialism and began economic reforms in the mid-1970s, the pace of progress sped up again, and soon Chile’s infants were safer than Venezuela’s. Today, Chile’s infant mortality rate is similar to that of the United States.

There is a lesson to be learned from these data points: economic policy matters. While Venezuela’s socialism has managed to kill more infants than a full-blown war in Syria, Chile’s incredible success story shows us that by implementing the right policies, humanity can make rapid progress and better protect the youngest, most vulnerable members of society. Today it is hard to believe that infants in Chile were once more likely to die within a year than their contemporaries in Venezuela and Syria.

What about your country? For every 1,000 infants born, how many die and how many live to see their first birthday? Explore the data for yourself, and consider using HumanProgress.org’s new tool, Your Life in Numbers, to see your country’s progress in infant survival and other areas since you were born.

This first appeared at Cato at Liberty.