Real-World Examples of How the Minimum Wage Harms Workers

You don’t need to be a libertarian to realize this is a problem.

Politicians can interfere with the laws of supply and demand (and they do, with distressing regularity), but they can’t repeal them.

The minimum wage issue is a tragic example. If lawmakers pass a law mandating wages of $10 per hour, that is going to have a very bad effect on low-skilled workers who can only generate, say, $8 of revenue per hour. 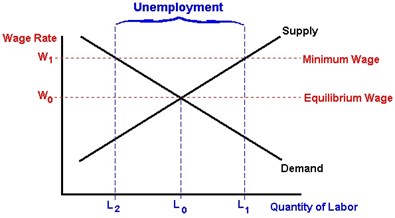 You don’t need to be a libertarian to realize this is a problem.

Catherine Rampell leans to the left, but she warned last year in the Washington Post about the danger of “helping” workers to the unemployment line:

…the left needs to think harder about the unintended consequences of… benevolent-seeming proposals. In isolation, each of these policies has the potential to make workers more costly to hire. Cumulatively, they almost certainly do. Which means that, unless carefully designed, a lefty “pro-labor” platform might actually encourage firms to hire less labor… It’s easier, or perhaps more politically convenient, to assume that “pro-worker” policies never hurt the workers they’re intended to help. Take the proposal to raise the federal minimum wage to $15 an hour… raising wages in Seattle to $13 has produced sharp cuts in hours, leaving low-wage workers with smaller paychecks. And that’s in a high-cost city. Imagine what would happen if Congress raised the minimum wage to $15 nationwide… Why wouldn’t you want to improve the living standards of as many people as possible? The answer: You won’t actually be helping them if making their labor much more expensive, much too quickly, results in their getting fired.

By the way, while I’m glad Ms. Rampell recognizes how big increases in the minimum wage will have an adverse impact, I think she is rather naive to believe there are “carefully designed” options that wouldn’t be harmful.

Or does she have a cutoff point for acceptable casualties? Maybe she thinks that an increase in the minimum wage is bad if it throws 500,000 people into unemployment but that a small increase that leads to 200,000 fewer jobs is acceptable? 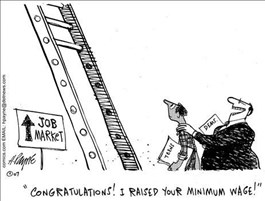 In any event, the voters of DC apparently didn’t read her column, and they voted earlier this year to restrict the freedom of employers and employees in the restaurant sector to engage in voluntary exchange.

But then something interesting happened. Workers and owners united together and urged DC’s government to reverse the referendum.

The Wall Street Journal opined on this development:

…last week Washington, DC’s Democratic city councillors moved to overturn a mandatory minimum wage for tipped workers after bartenders, waiters, and restaurant managers served up a lesson in economics… The wage hike was billed as a way to give workers financial stability… But tipped workers realized the policy came with serious unintended consequences… workers pushed for repeal. Though restaurants pay a $3.89 hourly wage to tipped workers, “we choose these jobs because we make far more than the standard minimum wage” from tips, bartender Valerie Graham told the City Council… “Increasing the base wage for tipped workers who already make well above minimum wage threatens those who do not make tips,” such as cooks, dishwashers, and table bussers, Rose’s Luxury bartender Chelsea Silber told the City Council… Repeal requires a second council vote, but Democratic Mayor Muriel Bowser says she agrees. Congratulations on the revolt of the restaurant masses.

There’s now a mandate for a higher minimum wage in New York. Ellie Bufkin explains some of the consequences in a column for The Federalist:

This minimum wage spike has forced several New York City businesses to shutter their doors and will claim many more victims soon. Businesses must meet the $15 wage by the end of 2018, the culmination of mandatory increment increases that began in 2016 … For many businesses, this egregious law is not just an inconvenience, it is simply unaffordable. The most recent victim is long-time staple, The Coffee Shop… In explaining his decision to close following 28 years of high-volume business, owner Charles Milite told the New York Post, “The times have changed in our industry. The rents are very high and now the minimum wage is going up and we have a huge number of employees.”…Of all affected businesses, restaurants are at the greatest risk of losing their ability to operate under the strain of crushing financial demands. They run at the highest day-to-day operational costs of any business, partly because they must employ more people to run efficiently… Eventually, minimum wage laws and other prohibitive regulations will cause the world-renowned restaurant life in cities like New York, DC, and San Francisco to cease to exist.

For what it’s worth, I don’t think restaurants will “cease to exist” because of mandates for higher minimum wages.

But there will definitely be fewer establishments with fewer workers.

Why? Because businesses aren’t charities. They hire workers to increase profits, so it’s unavoidable that we get bad results when government mandates result in some workers costing more than the revenue they generate, which is what we’re now seeing in Seattle.

I’ll close by recycling this debate clip from a few years ago. I made the point that faster growth is the right way to boost wages:

And I also gave a plug for federalism. If some states want to throw low-skilled workers out of jobs, I think that will be an awful outcome. But it won’t be as bad as a nationwide scheme to increase unemployment (especially for minorities).

P.S. As is so often the case, the “sensible Swiss” have the right perspective.

P.P.S. Here’s a video making the case against government wage mandates. And here’s another interview I did on the topic.