Puerto Rico's Man-Made Disaster Might Be Worse than the Hurricane

It’s almost as if Puerto Rico is a perfect storm of bad policy.

Puerto Rico is getting lots of attention because Hurricane Maria caused a tremendous amount of economic damage.

That leads to an important discussion about the role of government 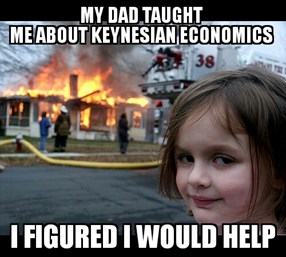 – particularly the federal government – when there is a natural disaster (and a secondary discussion about the silly Keynesian argument that disasters are good for prosperity).

But let’s focus today on a man-made disaster. Puerto Rico is the Greece of America, and it was a fiscal mess well before the hurricane hit. Indeed, there’s already been partial-bailout legislation from Washington.

The Wall Street Journal opined wisely on the topic, starting with the observation that we shouldn’t feel too much sympathy for investors who purchased bonds from the island’s profligate government.

…they knew what they were getting into. Lenders piled into Puerto Rican bonds that paid high yields that are “triple tax-exempt”—they can’t be taxed by federal, state or local governments in the U.S. Yet lenders also knew that the Puerto Rican government was heading toward a debt crisis. The economy has been contracting for a decade, and the commonwealth has $48 billion in unfunded pensions on top of $72 billion in bond debt. Creditors bet that the high yield was worth the political risk, but the music was bound to stop. One lesson of the last decade that creditors don’t want to learn, even after Detroit and Greece, is that sovereign debt to lousy governments is high risk. The abrogation of debt contracts that will now take place is regrettable, but there is a price for betting on politicians.

It would be a nice lesson if investors learned not to trust governments, especially the ones most prone to destructive statist policies.

But that doesn’t address the underlying problem of how to generate growth in Puerto Rico. The answer, needless to say, is free markets and small government.

…the territory will have to grow faster. This is where bankruptcy alone is inadequate. Puerto Rico will have to cut taxes on investment, rationalize welfare programs that deter working, and pare back labor protections that make France look like Hong Kong. If Mr. Rossello won’t do it, then the control board will have to. Puerto Rico will continue to flounder even with reduced debt if labor participation remains stuck at 40% and unemployment is in the double digits.

Unfortunately, the government has been doubling down on bad policy.

Investor’s Business Daily delves deeper into the issue of how big government is strangling prosperity.

The key is to create the correct incentives for the island’s people to encourage — rather than discourage — their policymakers to implement necessary and difficult reforms. This is particularly true with regard to pension reform. …Emphasis should instead be put on the many necessary changes to Puerto Rican labor laws, welfare programs and business and tax regulations which could spur more private sector business and job creation, encourage more people to work, and allow economic growth to resume. …Changes to U.S. laws and regulations discouraging labor force participation in Puerto Rico, such as the high minimum wage and easier eligibility for Social Security disability benefits for Spanish speakers, would also help greatly. And most importantly, Puerto Rico’s lingering pension crisis must be solved, both because of its fiscal significance and because it illustrates the lack of political courage and imagination by the government and the oversight board. …economic activity in Puerto Rico is now so severely depressed by a heavy government presence.

And even the most establishment-leaning Economist noted that government dependency is a major problem.

The island is distinguished by its poverty and joblessness, which are far worse than in any of the 50 states. The territory’s economy, moreover, has fallen further behind the national one over the past three decades. Bad government—not just locally, but also federally—is largely to blame. …Puerto Rico’s annual income per person was around $12,000 in 2004, less than half that of Mississippi, the poorest state. More than 48% of the island’s people live below the federally defined poverty line.

Why is income so low and why is there so much poverty?

Simply stated, idleness is being heavily subsidized. The welfare state reduces labor supply on the mainland. And the same thing happens in Puerto Rico.

Half the working-age men in Puerto Rico do not work. …Many things have gone wrong. Most important, however, is that the United States government assumed too big a role in the Puerto Rican economy, and its largesse enabled the commonwealth’s government to do the same. …the island’s economy is now lost in a thicket of bad incentives…an oversized welfare state…transfers…make up more than 20% of the island’s personal income. These federal handouts…by Puerto Rican economic standards, they are huge. And the more a man or woman earns through paid work, the more they decrease. …federal disability allowances are much higher than the United States average as a share of wages and pension income. Unsurprisingly, therefore, one in six working-age men in Puerto Rico are claiming disability benefits. …For many people, …the money that can be earned through federal transfers and a little informal work is more than the market wage—and requires much less effort.

In other words, Puerto Rico is just another layer of evidence on the well-established link between government and poverty.

And when people do have jobs, all too often they are employed by a bloated and inefficient government bureaucracy.

Puerto Rico’s bloated government… Around 30% of the territory’s jobs are in the public sector. Among other things, a big and coddled bureaucracy undermines Puerto Rico’s educational achievements…nearly half those on the education department’s payroll are not teachers; quality has fallen because of low accountability and mismanagement. …As he walked through Aguadilla’s town hall recently, Mr Méndez…says, is that “All they want to do is find security only. They have no ambition…Everybody wants to work for the government.” Manuel Reyes, of the Puerto Rico Manufacturers Association, also sees little hope that the government’s role will shrink.

It’s almost as if Puerto Rico is a perfect storm (no pun intended) of bad policy.

The solution is – or should be – obvious. And it’s the same one I suggested for Greece. Allow the government to default on existing debt, but only in exchange for pro-market reforms such as a long-run spending cap, privatization, a freeze on the size and compensation of the island’s bloated bureaucracy, and elimination of destructive regulation.

For all intents and purposes, Puerto Rico should become the Hong Kong of America. The island does have substantial autonomy and local policymakers have demonstrated that they sometimes are willing to do the right thing (they made Puerto Rico a legal tax haven for U.S. citizens). Now it’s time to make a great leap forward.