Though protectionism has recently received widespread attention, if one studies history, it becomes evident that it has been present for centuries.

When looking at the news, one might think the trade tensions between China and the US are a purely contemporary issue. However, if one studies history, it becomes evident that protectionism has been present for centuries. The most recent arguments, those of unfair trade, are only a variation of the age-old argument that protectionism saves domestic industries from the threat of foreign competition.

Protectionists only see the jobs lost rather than the jobs created by free trade. As free trade lowers prices, consumers have more money in their pockets. Further, the producer only thinks of protectionism in isolation and does not realize that with free trade, he may get access to cheaper supplies to build his goods, thereby allowing him to compete with the cheaper foreign producers. He also does not realize that he will be able to buy other goods at better prices. Even subsidized foreign goods are welcome, as the foreign government is essentially covering their own producers’ losses so we can get cheaper goods—essentially, free stuff. There are numerous other arguments against protectionism.

Adam Smith wrote in great detail against protectionism in his magnum opus The Wealth of Nations (1776), indicating that efforts to impose tariffs were active during those times, as well. In Book IV, chapter 2, Smith laid the groundwork for free trade advocates. He noted:

Among other things, Smith talked in great detail of the dangers of domestic monopoly and its negative impacts on prices and competitiveness. He also spoke of the market distortions created by protectionism, as capital is allocated to the production of goods that foreign countries have an advantage over rather than using that same capital for the production of goods the domestic country is more efficient at. Many of the arguments for free trade in contemporary times have been almost identical to those of Smith’s from the 18th century.

During the 18th century, a form of protectionism called mercantilism was at the forefront of politics. Mercantilism differs from traditional protectionism in the sense that is an “active’ form of protectionism. It seeks to create a positive balance of trade for the country by accumulating gold reserves (most of the world was on the gold standard at the time) by boosting exports. Therefore, it may seek favorable reciprocal trade deals that do so but limit imports from other countries that may harm the balance of payments.

Alexander Hamilton was a proponent of mercantilism. Although a Founding Father—and, as such, associated with the idea of liberty—he was, in fact, an advocate of centralized government throughout his career. In his Report on Manufacturers (1791), Hamilton laid the groundwork for mercantilist sentiment by advocating for overall tariffs, especially for the protection of infantile industries. Future president Abraham Lincoln would be another staunch mercantilist.

With its growing empire during the 18th century, tariffs were a way to secure much-needed revenue for further expansion.

Protectionist sentiments were present across the Atlantic, as well. For example, after signing a trade deal with the United Kingdom in 1786, the French were displeased with the outcome because the undeveloped French industry was forced to sell at loss-making prices in Britain, and sentiment for protectionism in France grew.

Despite such free trade deals, at certain times throughout its history, the United Kingdom also fostered protectionism. With its growing empire during the 18th century, tariffs were a way to secure much-needed revenue for further expansion. The most notable instance was the Corn Laws of 1815, enacted in order to keep British grain prices high. This disastrous trade policy ended in the Irish Famine of 1845, which was caused by a failure of potato crops, and given the high tariffs on imports, food from other places was made expensive, causing scarcity. The abandonment of the Corn Laws soon afterward was a turning point toward free trade, both in the UK and across Europe. Scottish philosopher David Hume greatly helped in championing the cause of free trade with his price-specie-flow mechanism.

Protectionist sentiment would return in later periods, though mostly as an attempt to revive the domestic industry after a crisis, as was the case during the 1930s. International trade barriers were erected after the 1929 stock market crash when the US enacted the Smoot-Hawley tariff act, which introduced tariffs on more than 20,000 goods in order to prop up American industry. The international community responded with tariffs of their own, and many economists believe the Smoot-Hawley bill triggered the double-digit unemployment numbers seen throughout the 1930s.

The graph below indicates these shifts in the protectionist sentiments of some of the major superpowers. As is evident, tariffs sharply reduced after the 1840s in Great Britain, while they shot up in the US after the American Civil War. As mentioned, Lincoln was a staunch advocate of protectionism and implemented a tariff of 44 percent during the war. 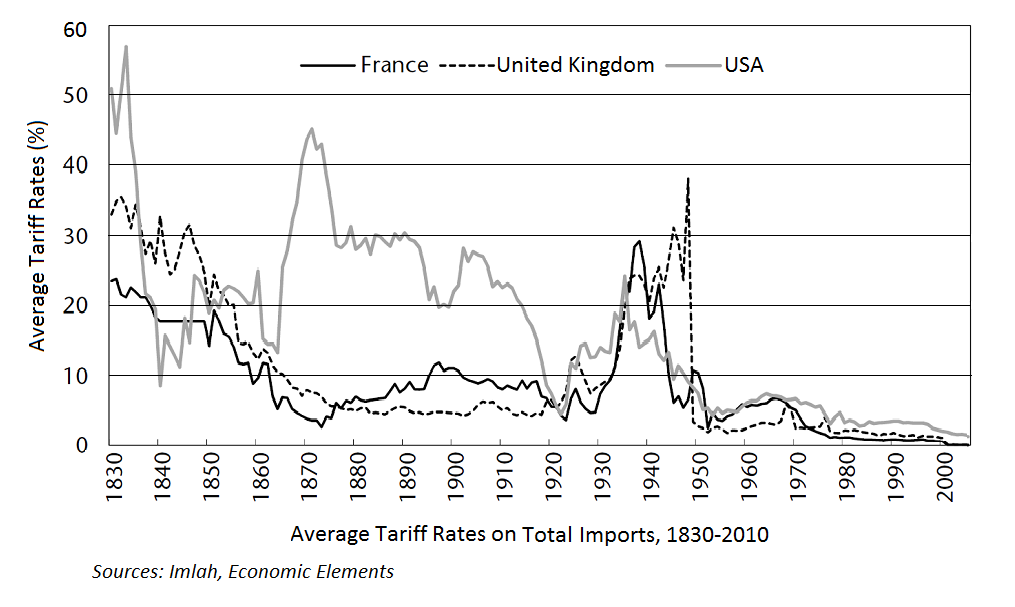 Given the longevity of the idea of protectionism, one may wonder how it managed to survive so long. The answer is simple: self-interest. It is in the interest of every individual to sell as many goods of his own product for the highest price. As such, foreign competition becomes a threat. Free trade usually lowers the prices of goods and also offers a wider array of choices, thereby negatively impacting an uncompetitive domestic producer. It is no wonder that producers often create cartels to have a bigger influence over the push for trade barriers. As Adam Smith wrote:

People of the same trade seldom meet together, even for merriment and diversion, but the conversation ends in a conspiracy against the public, or in some contrivance to raise prices.

Given such self-interest and its prevalence over the centuries, the best solution to protectionism is a constitutional amendment in favor of zero percent tariffs without any exception. The reason for disallowing exceptions is that the argument for protectionism tends to change, thus potentially shifting public opinion in favor of it. The mercantilist argument was focused on exports and gold, while the current arguments are based on reciprocal fairness. The traditional argument has been for the protection of domestic industries or protectionism only for newer, not-yet-established industries. Whatever the argument may be, by disallowing any exceptions, we can secure the future of free trade from any political newspeak that advocates protectionism despite its poor historical track record.