A Tale of Two Bubbles: How the Fed Crashed the Tech and the Housing Markets

Central Bankers appear to have learned little from recent history.

Photo by Pieter on Unsplash

Since its founding, the Federal Reserve has had a hand in creating some of the largest bubbles in history. When the bank lowers interest rates, there is excess cash in the economy, making it relatively cheap for anyone to borrow. This creates malinvestment in the economy because while not everyone has profitable ideas, many more people can borrow, causing a bubble to form. Once the economy is deemed to be overheating, the bank raises interest rates. This forces the bubble to burst, and an economic downturn follows as a great deal of the malinvestment goes bust and people cannot borrow as cheaply anymore. To foster recovery, the Fed lowers rates again to boost investment, causing the entire cycle to repeat.

This is precisely what occurred when the technology bubble burst in 2001, followed by the housing bubble in 2008. In fact, these two events are very closely tied together, which becomes evident through analysis of the monetary policies of that period. It was precisely the response to the 2001 crash that fostered the housing bubble in the first place. 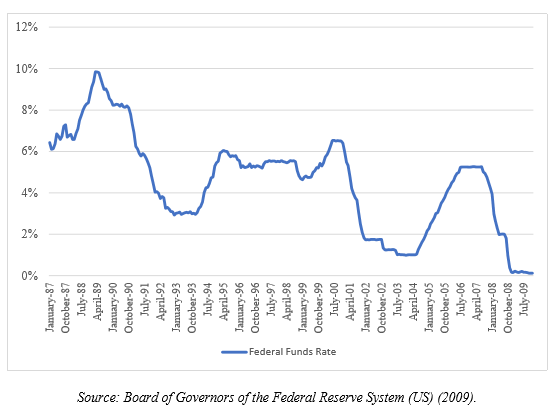 Following the mild economic downturn at the beginning of the 1990s, the US economy seemed to be recovering, and by 1994, the Federal Reserve was raising interest rates to halt a potential boom. The federal funds rate in September 1994 was 4.73 percent, and by January of 1995, it was 5.53 percent. However, economic distress reemerged with the Japanese crisis, an economic downturn that eventually led to a loss of $1 trillion in Japan’s GDP following an asset bubble collapse in the early 1990s.

Despite attempts to cool down the economy, such a stock market frenzy on the NASDAQ had already left an economic mark.

Given the size of the Japanese economy, the problems were bound to spill over into other countries, as well. Not wanting to repeat the bailouts that occurred during the Mexican peso crisis, the governments of Germany and the US sought to subsidize purchases of Japanese goods and to reverse the exchange rate in favor of a strong yen. Such an action required an increase in liquidity, which had to go somewhere. This time, the liquidity went to the stock market.

As the federal funds rate was beginning to decrease, there was an increase in the tech firm-dominated NASDAQ Composite, which crossed the 1,000-point mark for the first time in history. The federal funds rate in June of 1995 was six percent, with the NASDAQ standing at 933, while in April of 1996 it was 5.22 percent, with the NASDAQ standing at 1190 points. This coincided with a general awareness of the powers of the internet, as some of the more powerful technology companies, such as the Netscape browser, were looking to cash in by doing initial public offerings. Tech IPOs usually had returns in excess of 100 percent on the first day. The most extreme cases of first-day returns were Linux (697.5 percent), TheGlobe.com (606 percent), and Foundry Networks (525 percent), among others.

The NASDAQ rose at an alarming pace, reaching almost 2,200 points in January of 1999. In order to stop the economy from overheating, the federal funds rate was raised six times between June 1999 and May 2000. Unfortunately, despite attempts to cool down the economy, such a stock market frenzy on the NASDAQ had already left an economic mark. It collapsed at the turn of the millennium and was followed by a mild recession. The NASDAQ fell from 3,966 in June of 2000 to 2,471 in December of the same year. By September of 2001, it was down to 1498.

Federal Reserve Chairman Alan Greenspan decided to cut rates to one percent starting in 2001 in order to stimulate the economy.

In addition to the crash, the United States was struck by the September 11 terrorist attacks. This was the worst terrorist attack on US soil, with a death toll of more than 3,000. Such a macroeconomic shock greatly affected the market, as the New York Stock Exchange dropped 14 percent the first day it opened after the attacks.

As a response to these two economic shocks, Federal Reserve Chairman Alan Greenspan decided to cut rates to one percent starting in 2001 in order to stimulate the economy. This expansionary policy was Greenspan’s weapon of choice, as he had been praised in the past for saving the United States from several crises by using the same policy. After 11 federal funds rate cuts, the federal funds rate was one percent from June 2003 to June 2004.

Apart from monetary policy, the federal government actively encouraged banks to lend to uncreditworthy individuals, which further exacerbated the housing bubble. Per legislation such as the Community Reinvestment Act, as well as the Boston Fed Report, banks were forced to issue mortgages to uncreditworthy individuals. These mortgages were sold to government-sponsored enterprises such as Fannie Mae and Freddie Mac. Many of the individuals who qualified for mortgages had little income—let alone savings—to fall back on. Afterward, they were repackaged and securitized as collateralized debt obligations so they could be traded on financial markets.

People began to miss mortgage payments because their monthly burdens had increased by 3.25 percentage points in a little over a year, with many defaulting on their mortgages due to the adjustable rates the government encouraged them to undertake. In addition, many of the individuals who qualified for mortgages had little income—let alone savings—to fall back on. This further hampered their situation and ability to save their homes from foreclosure.

The rest is history. The US mortgage bubble crashed in 2008, and a full-fledged international crisis was already looming the following year. Several giants of the financial industry, such as Lehman Brothers, closed their doors. Others were bailed out. The United States entered “the recession”—its largest economic downturn since the Great Depression.

The central bank cannot control the economy. The idea of discretionary monetary policy is a flawed concept stemming from Keynesian ideas of government intervention in the economy. It creates a boom and bust cycle. Until central bankers abandon the boom and bust cycle idea, things are not going to change—there is no "correct" rate hike or decrease.Once a boom occurs (tech bubble), a bust happens when interest rates are raised (2001 downturn). In order to get the country of the downturn, another boom is created (housing bubble), which also leads to a bust (2008 crisis).

The main issue is that Central Bankers have not learned their lesson and they continue with the same policy. Namely, what has the government done to get the country out of the 2008 recession (the latest bust)? More or less the exact same thing it did in 2001: It lowered interest rates to boost the economy. On top of this, it instituted the program of quantitative easing—the open market purchases of bonds—causing even more excess cash to flood into the economy to create further malinvestment. Once the economy was deemed to be overheating, rates were raised. Until central bankers abandon the boom and bust cycle idea, things are not going to change—there is no "correct" rate hike or decrease.