Progressives Must Confront Their Racist Roots 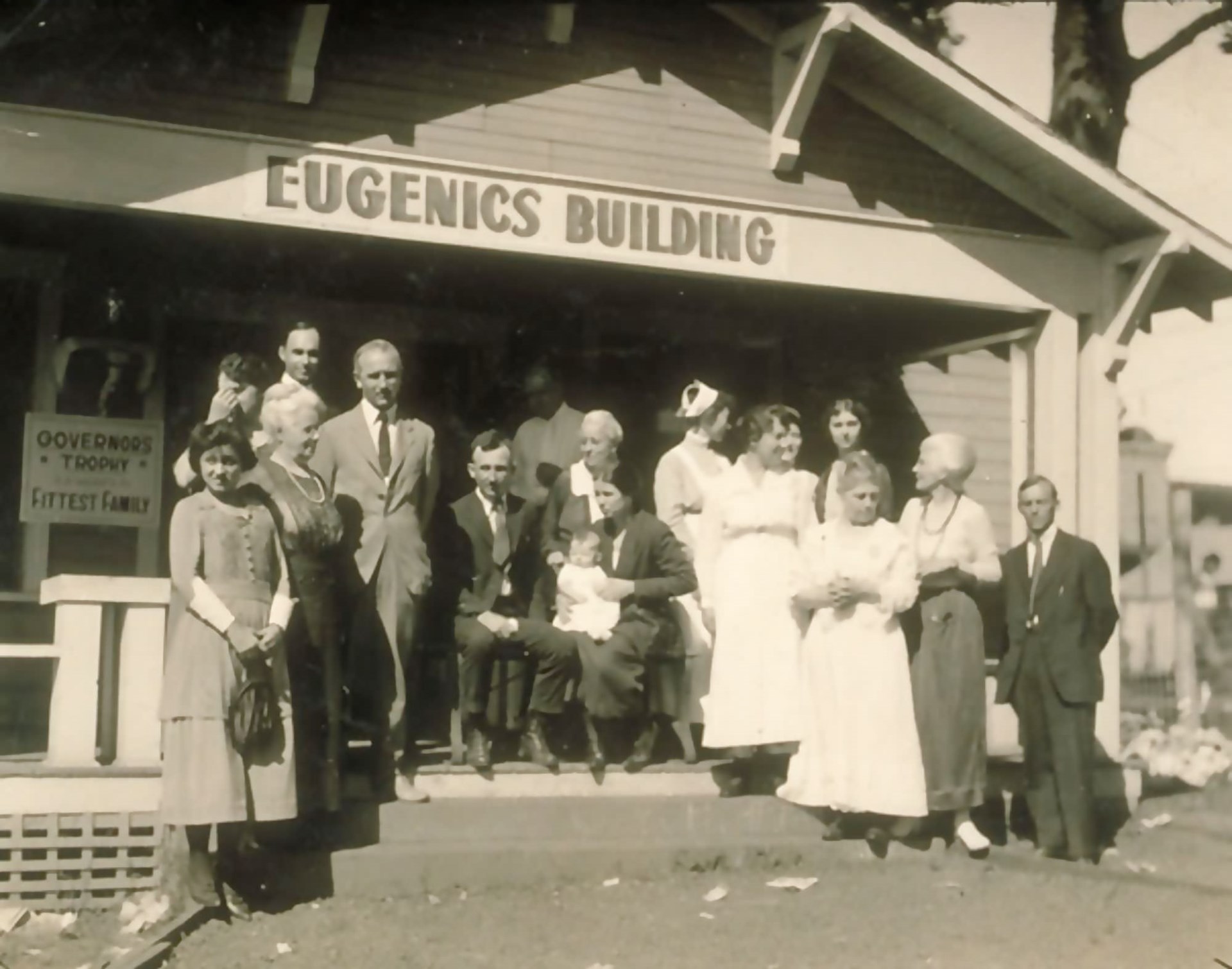 Until recently, Princeton University’s devotion to Woodrow Wilson was so pervasive and worshipful that visitors to campus might easily have mistaken the modernist parthenon housing the Woodrow Wilson School of Public and International Affairs for a literal temple.

The progressives believed, first and foremost, in the importance of science and scientific experts in guiding the economy, government, and society.

If nothing else, the black students demanding that my alma mater strip the segregationist president’s name from its public-policy school and Wilson College residential complex have accomplished one amazing thing. They’ve forced Princeton to acknowledge that its 13th president, and the nation’s 28th, was not the most nearly perfect human ever to inhabit New Jersey.

As the university debated the protesters’ demands, a new work of intellectual history coincidentally published by Princeton University Press and written by a Princeton faculty member offered a compelling -- though implicit -- case that Wilson’s name is ideally suited for the public-policy school but deeply ironic for the residential college.

Along the way, “Illiberal Reformers: Race, Eugenics and American Economics in the Progressive Era,” by Thomas C. Leonard, reveals the largely forgotten intellectual origins of many current controversies, including disputes over tightening voter identification laws, raising the minimum wage and restricting immigration.

The book isn’t about Wilson per se. It’s about the progressive intellectual movement in which he played a major role as scholar, university administrator, and politician. Early 20th-century progressives transformed American institutions, and the movement’s premises continue to inform thinking and policy across the political spectrum. “It was the progressives who fashioned the new sciences of society, founded the modern American university, invented the think tank, and created the American administrative state, institutions still defined by the progressive values that formed and instructed them,” writes Leonard, a research scholar at Princeton’s Council of the Humanities.

The progressives believed, first and foremost, in the importance of science and scientific experts in guiding the economy, government, and society. Against the selfishness, disorder, corruption, ignorance, conflict and wastefulness of free markets or mass democracy, they advanced the ideal of disinterested, public-spirited social control by well-educated elites. The progressives were technocrats who, Leonard observes, “agreed that expert public administrators do not merely serve the common good, they also identify the common good.” Schools of public administration, including the one that since 1948 has borne Woodrow Wilson’s name, still enshrine that conviction.

Leonard also brings to light an embarrassing truth: In the early 20th century, the progressive definition of the common good was thoroughly infused with scientific racism. Harvard economist William Z. Ripley, for example, was a recognized expert on both railroad regulation and the classification of European races by coloring, stature and "cephalic index," or head shape. At the University of Wisconsin, the red-hot center of progressive thought, leading social scientists turned out economic-reform proposals along with works parsing the racial characteristics -- and supposed natural inferiority -- of blacks, Chinese, and non-Teutonic European immigrants. (Present-day progressives somehow didn’t highlight this heritage when they were defending “the Wisconsin Idea” against the depredations of Republican Governor Scott Walker.)

“The ‘race suicide’ of the American or colonial stock should be regarded as the most fundamental of our social problems,” the Wisconsin economist John R. Commons wrote in 1920. His colleague Edward A. Ross, who popularized the terms “social control” and “race suicide,” called interest in eugenics “a perfect index of one’s breadth of outlook and unselfish concern for the future of our race.”

Fewer voters among the lower classes was not a cost, it was a benefit of reform.

In the early 20th century, most progressives viewed as cutting-edge science what today looks like simple bigotry. “Eugenics and race science were not pseudosciences in the Gilded Age and Progressive Era,” Leonard emphasizes. “They were sciences,” supported by research laboratories and scholarly journals and promoted by professors at the country’s most prestigious universities.

While some socialists and conservatives also embraced them, Leonard argues, eugenics and scientific racism fit particularly well with progressive thought: “Eugenics was anti-individualistic; it promised efficiency; it required expertise, and it was founded on the authority of science.” Equally important, “biological ideas,” Leonard writes, gave progressive reformers “a conceptual scheme capable of accommodating the great contradiction at the heart of Progressive Era reform -- its view of the poor as victims deserving state uplift and as threats requiring state restraint.” They could feel sorry for impoverished Americans while trying to restrict their influence and limit their numbers.

Take political participation. Nowadays, people argue about whether stricter voter identification laws are good-government protections against fraud or discriminatory attempts to deter minority and low-income voters. A century ago, leading progressives happily embraced both goals. “Fewer voters among the lower classes was not a cost, it was a benefit of reform,” Leonard writes. After progressive reforms, including Jim Crow restrictions sold in part as anti-corruption measures, voter participation plummeted. In New York State, turnout dropped from 88 percent in 1900 to 55 percent in 1920, while national turnout fell from 80 percent in 1896 to 50 percent in 1924.

Advocates similarly didn’t deny that imposing a minimum wage might throw some people out of work. That wasn’t a bug; it was a feature -- a way to deter undesirable workers and keep them out of the marketplace and ideally out of the country. Progressives feared that, faced with competition from blacks, Jews, Chinese, or other immigrants, native-stock workingmen would try to keep up living standards by having fewer kids and sending their wives to work. Voilà: “race suicide.” Better to let a minimum wage identify inferior workers, who might be shunted into institutions and sterilized, thereby improving the breed in future generations.

One progressive economist did offer an alternative view. John Bates Clark, whose work avoided the racist assumptions of his peers, argued that a job’s wage would -- and, he believed, should -- equal the productivity of the marginal, or incremental, worker in that position. Rather than facing an inevitable race to the bottom, more productive workers in more productive enterprises could therefore command higher wages, a position compatible with labor leader Samuel Gompers’s preference for collective bargaining over technocratic wage arbitration.

Restricting immigration was as central to the progressive agenda as regulating railroads.

Clark’s theory is now a foundation of mainstream labor economics. In his day, however, it was highly unpopular. “A key element of resistance,” writes Leonard, “was that many progressives were reluctant to treat wages as a price,” rather than a right of citizenship and social standing. Informed by their beliefs in scientific racism, most progressives preferred wages to favor some groups over others: men over women, whites over blacks, and most prominently, native stock over immigrants.

Although they generally assumed black inferiority, progressives outside the South didn’t worry much about the “Negro question.” They were instead obsessed with the racial, economic, and social threats posed by immigrants. MIT president Francis Amasa Walker called for “protecting the American rate of wages, the American standard of living, and the quality of American citizenship from degradation through the tumultuous access of vast throngs of ignorant and brutalized peasantry from the countries of eastern and southern Europe," whom he described in Darwinian language as “representing the worst failures in the struggle for existence.”

So restricting immigration was as central to the progressive agenda as regulating railroads. Indeed, in his five-volume History of the American People, Wilson lumped together in one long paragraph the 1882 Chinese Exclusion Act and the 1887 Interstate Commerce Act as “the first fruits of radical economic changes and the rapid developments of trade, industry, and transportation” -- equal harbingers of the modern administrative state. With a literacy test and ban on most other Asian immigrants enacted in 1917 and national quotas established in 1924, the progressives bequeathed to America the concept of illegal immigration.

Getting those restrictions enacted required decades of campaigning, however, allowing millions of “beaten men from beaten races” (Walker’s term) to continue to pour in.  Their children and grandchildren didn’t in fact run the country into the ground and by the middle of the 20th century, they started to show up in the halls once controlled by those who scorned them. In the years around 1960, some were among the Princeton students who established a more intellectual and egalitarian alternative to the selective private eating clubs. Knowing Wilson had wanted to replace the clubs with university dining halls, they named it for Woodrow Wilson.

“Ironic, isn’t it?” said Harvey Silverglate, an early Woodrow Wilson Society member and a scholarship student whose father hadn’t graduated from high school. “An eating facility named after Woodrow Wilson that was composed of those not suitable for the clubs -- blacks, Jews, gays, poor kids, kids from non-prestigious 'finishing’ schools.”

A version of this article was first published at Bloomberg.

Virginia Postrel is an American political and cultural writer of broadly libertarian, or classical liberal, views.