Basic Economics Has Been Exiled from Reporting

Scott Alexander recently pointed to the appalling record of the left-leaning media on economic policy:

Venezuela is collapsing, with the New York Times describing it as "uncharted territory" for a semi-developed country to be so deep in economic disaster that its hospitals, schools, power plants, and basic services are simply shutting down.

So it's a good time to reflect on the media's previous glowing Venezuela stories. In 2013, Salon praised "Hugo Chavez' Economic Miracle," saying that "[Chavez's] full-throated advocacy of socialism and redistributionism at once represented a fundamental critique of neoliberal economics, and also delivered some indisputably positive results" (h/t Ciphergoth). And the Guardian wrote that "Sorry, Venezuela Haters: This Economy Is Not The Greece Of Latin America."

Prediction is hard, and I was willing to forgive, e.g., the pundits who were wrong about the Trump nomination. But I am less willing to forgive here, because the thesis of these articles wasn't just that they were right, but that the only reason everyone else didn't admit they were right was neoliberalism and bad intentions. Psychologizing other people instead of arguing with them should take a really high burden of proof, and Salon and Guardian didn't meet it. Muggeridge, thou should be living at this hour...

That got me thinking about Greece. I wondered how the left had explained away the abysmal failure of statism in Greece. Back in 2008, when I did research on neoliberalism in developing countries, I found that Greece was the least neoliberal economy in the developed world, according to a variety of metrics. Note that at this time Greece was booming, so this was not a question of people who liked neoliberalism calling Greece statist just because they wanted to peg that tag on a failed system. Indeed I was surprised that Greece did so well until 2008, despite being so amazingly un-neoliberal.

Of course, we all know what happened next. The world discovered that the Greek boom was funded by unsustainable foreign borrowing, and that the Greek government lied about how much they had borrowed. When the huge debts were exposed, Greece had to sharply curtail its borrowing. Even worse, the eurozone crisis pushed Greece into recession. Greece is now widely seen as the worst economy in the developed world, with major structural problems.

So I wondered how the left would explain the failure of statism in Greece, and decided to Google "Greece crisis neoliberalism," expecting to find lots of articles about how Greece needed to move in a more neoliberal direction, like the northern European economies, in order to recover from its statist nightmare. What I found was the exact opposite: 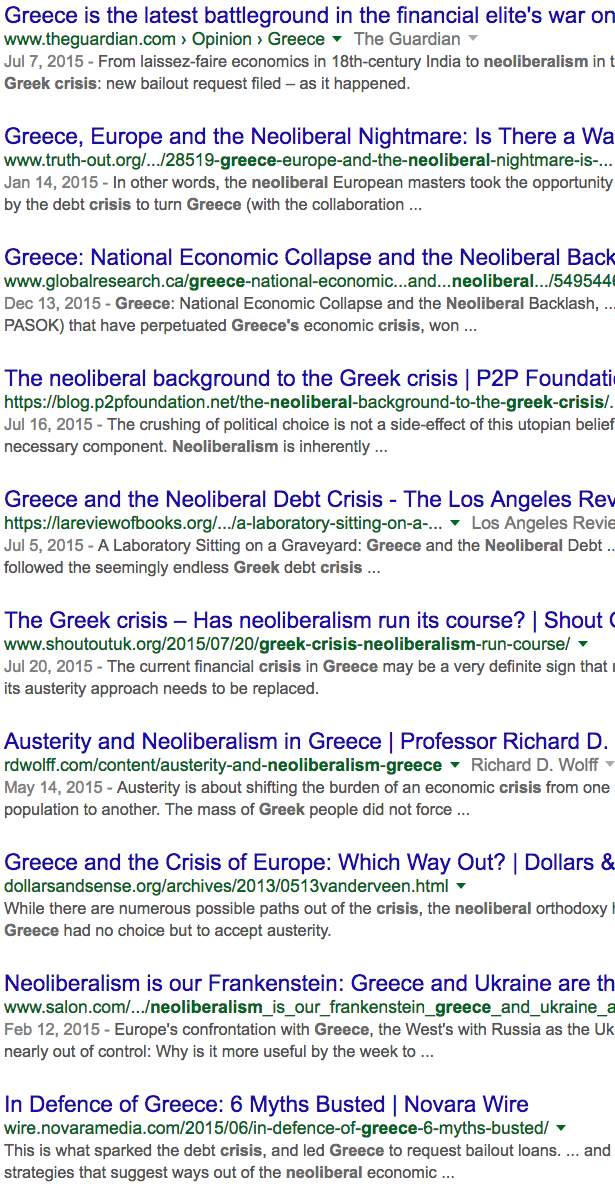 Here's the link, as lack of space caused me to cut off the right margin.

Notice that we see the usual suspects, the Guardian and Salon. Indeed all of the links on the first Google page talk about Greece from an anti-neoliberal perspective.

There is no argument that Hong Kong's success is a success story for statism.To be clear, there are many countries that are a mix of free markets and statism, and hence there can be honest differences as to which characteristics are the most salient. But at the extremes, reasonable people should not disagree. There is no plausible argument that Hong Kong's success is in any way a success story for statism, and there is no plausible argument that Greece's failure has anything to do with neoliberalism. To suggest otherwise is to engage in The Big Lie.

So what does this mean?

1. The neoliberal consensus of the 1990s is gone. Much of the left-wing media has returned to its socialist roots.

2. The term "neoliberalism" is now completely detached from any actual characteristics of an economic policy regime, and is just a sort of free floating insult tossed around by the left, attached to anything they don't like about the world. Perhaps they don't even realize that they are lying.

3. The left has split. Some of the moderates still reject socialism, and were critical of Bernie Sanders' unrealistic proposals. However the fastest growth is occurring on the far left fringes, where the policies of Sanders, Corbyn and Chavez are defended.

4. There is a similar split on the right, with the more extreme supply-siders and gold bugs being out of touch with the mainstream. However no one on the right, as far as I know, supports policies as destructive as what occurred on Venezuela. On the right, the worst policy mistakes are typically associated with growing nationalism and racism, not dysfunctional economics.