Last month I discussed the distorting effects of government-imposed price ceilings. Not content to limit the disruptive impact on economic decisions to price ceilings, governments are also quite willing to impose floors under which prices cannot legally fall. Like price ceilings, price floors disrupt market cooperation and have consequences quite different from those advertised by their advocates. Before considering an example of price floors—minimum wages—let’s examine the problem in general terms. (For more on the minimum wage, see "3 Reasons the $15 Minimum Wage Is a Bad Way to Help the Poor.") 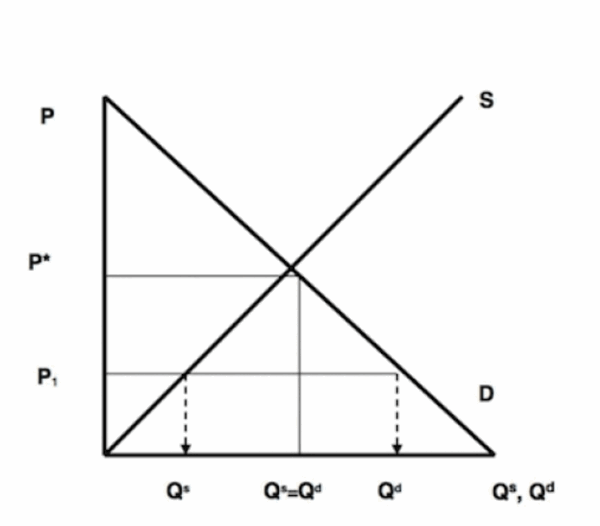 The standard downward-sloping demand curve, D, and upward-sloping supply curve, S, are shown in the nearby figure. As discussed in my column on demand and supply two months ago, these two curves determine an equilibrium price, P*, that coordinates the decisions of all consumers and suppliers. At P* consumers want to purchase exactly the amount that suppliers want to sell.

Despite the amazing coordination that results from the equilibrium price, politicians are often convinced by organized interests that some suppliers should receive higher prices. Interestingly, as we shall see, those who lobby for higher prices are not always the ones who will receive them. But regardless of the source of the pressure, the political response is often to impose a price floor, such as PF in the figure.

With PF being the lowest price that can be legally charged, suppliers are anxious to sell QS units of the product. But at PF, consumers are willing to buy only QD units. The result is a surplus given by the difference between QS and QD. The appropriate response to a surplus is some combination of reduced supply and increased consumption. In a free market, suppliers communicate their frustration at not being able to sell all they would like by lowering the price they charge. As the price declines below PF, consumers increase their consumption and suppliers reduce their production. This mutual adjustment continues until the price reaches P*, where producer and consumer decisions are perfectly coordinated. But the price floor, PF, blocks that communication between suppliers and consumers, preventing them from responding to the surplus in a mutually appropriate way.

Suppliers Can Be Worse Off

Consumers are clearly made worse off by price floors. They are forced to pay higher prices and consume smaller quantities than they would with free-market prices. But price floors can also make suppliers worse off. Some suppliers can benefit from a price floor if they can sell all, or most, of the quantity they would like at that price, but then other suppliers will be even less able to sell as much as they desire.

Only if all suppliers of a product can sell as much as they want at the price floor is it possible for them to be better off as a group, and then only temporarily. Farmers favored price supports for crops because the federal government stood ready to purchase the supply that farmers couldn’t sell at the above-market price. But even in this case, the benefit to suppliers was only temporary since competition among farmers increased the cost of doing business. For example, the lure of above-market prices prompted farmers to bid up the price of land. That is, the price of land incorporated the benefits of the price supports. Those who owned good farmland before the programs started won windfall benefits, but those who entered farming afterward and paid inflated land prices did not.

A good example of how price floors can harm the very people who are supposed to be helped by undermining economic cooperation is the minimum wage. Legislating a minimum wage is commonly seen as an effective way of giving raises to low-wage workers. Unfortunately, it, like any price floor, creates a surplus. In this case, it is a surplus of workers (suppliers of labor), more of whom are willing to work in minimum-wage jobs than there are employers (demanders) willing to hire at that wage. We call a surplus caused by the minimum wage “unemployment.”

A wage floor hits workers with limited skills, primarily young people. According to The Economist, in 1997 the average unemployment rate among workers under 25 was three times greater than the average unemployment rate among those 25 or older (June 27, 1998). Young people are best able to improve their economic prospects by developing skills that increase their productivity. For those with the fewest advantages, the best hope is work experience and on-the-job training. The minimum wage reduces the number of people employers will hire for what is essentially training.

Consider also that the minimum wage reduces the cost of discriminating on non-economic grounds in hiring. With more young people applying for jobs than employers want to hire, and with no legal way of paying a lower wage, it costs nothing to exclude some applicants from consideration. If an employer has a choice between hiring the mayor’s son or a poor kid from the other side of the tracks who would be willing to work for less, the mayor’s son is almost sure to get the job.

The young person from an affluent family can expect to have connections that make it possible for him to get a minimum-wage job before heading off to college, or a part-time minimum-wage job while in college. The poor kid whose education in an inner-city public school makes going to college unlikely, and whose best hope for gaining skills is job experience, is less likely to get a job because of the minimum wage. This kid would have a far better chance if he could communicate his willingness to work by accepting the lower wage that is now outlawed. It should surprise no one that the unemployment rate for nonwhite teenagers is several times the rate for white teenagers.