An update to the Nolan Chart

The traditional left-right spectrum leaves much to be desired as a model of political belief. Its most glaring failure is that it places radical “left” and radical “right” political thought at opposite ends of the spectrum even though, in practice, the two result in almost indistinguishable levels of totalitarian oppression.
In 1971, libertarian David Nolan offered a two-dimensional chart that better models political thought. Shown below, the Nolan Chart plots belief in personal freedom along the y-axis and belief in economic freedom along the x-axis. 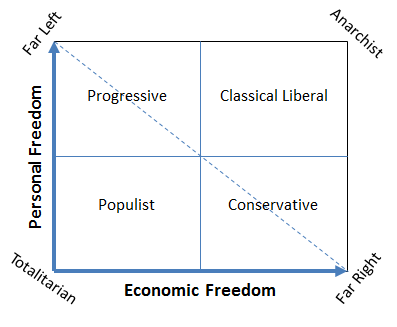 The traditional left-right spectrum appears as a diagonal line running from the top left (maximum personal freedom/minimum economic freedom) to the bottom right (minimum personal freedom/maximum economic freedom). Totalitarian “isms,” whether communist or fascist, end up together at the lower left corner (minimum personal and economic freedom). Complete and unrestricted freedom, or anarchy, is placed at the opposite corner (maximum personal and economic freedom).
The corners of the graph represent the political extremes, while the less radical, or more centrist, versions of the four "pure" types are represented by the progressive, classical liberal (or libertarian), conservative, and populist quadrants.
Advocates for Self Government offers the “World’s Smallest Political Quiz” as a tool to help people place themselves on this two-dimensional chart. It consists of 10 questions:
Personal Issues (Agree, Maybe, Disagree)
Economic Issues (Agree, Maybe, Disagree)
While the Nolan Chart depicts the political spectrum far better than does the traditional one-dimensional left-right line, it still lacks a foreign policy component. I propose adding a third axis to address this political dimension: 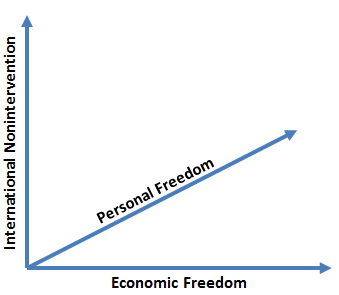 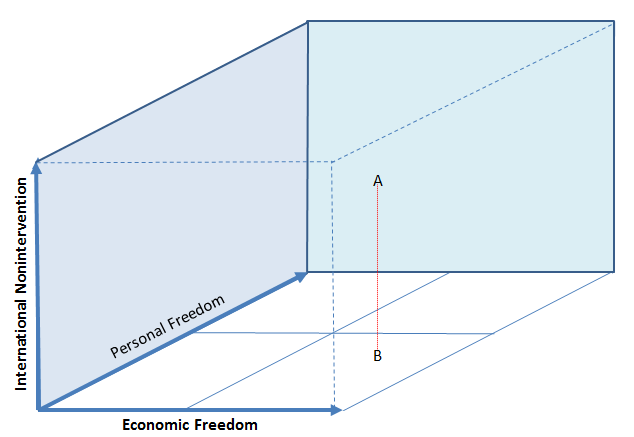 In the graphic above, point A represents a mostly noninterventionist conservative individual, while point B below it represents a completely interventionist conservative individual.
Do you think that the proposed 3-D chart helps to more adequately classify political positions? Are the five proposed foreign-policy questions adequate to classify a person’s positions in this area? What other questions might work better?