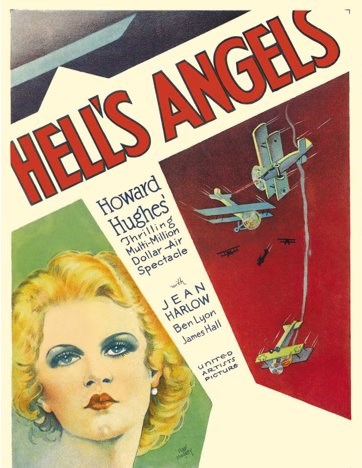 Until recently, I only knew Howard Hughes' World War I saga Hell's Angels (1930) second-hand, from Martin Scorsese's Hughes biopic, The Aviator.  I was amazed when I finally watched Hughes' classic.  The special effects are stunning even by modern standards.  And the Pre-Code script is too good to be true.

On the surface, the audience is supposed to detest the selfish, unscrupulous Monte Rutledge, the "bad brother" of protagonist Roy Rutledge.  But as in Milton's Paradise Lost, the author plainly has great sympathy for the devil.  The best scene must have shocked World War I veterans around the world.  When Monte feigns illness to avoid combat, a fellow pilot angrily declares, "He's yellow and we all know it."  Then Monte pulls off the mask:

That's a lie! I'm not yellow. I can see things as they are, that's all. I'm sick of this rotten business.

You fools. Why do you let them kill you like this? What are you fighting for? Patriotism. Duty. Are you mad?

Can't you see they're just words? Words coined by politicians and profiteers to trick you into fighting for them. What's a word compared with life... the only life you've got.

I'll give 'em a word. Murder! That's what this dirty rotten politician's war is. Murder! You know it as well as I do. Yellow, am I? You're the ones that are yellow. I've got guts to say what I think. You're afraid to say it. So afraid to be called yellow, you'd rather be killed first.

Critics routinely dismiss pacifists as "cowards."  But as I've said before:

Given the unpopularity of pacifism - and the extreme unlikelihood that your pacifism tips the scales against war - this is plainly false.  A real coward would enthusiastically parrot whatever the people around him want to hear.