Nudging: Should We Be Wary of the Latest Fad in Behavioral Economics?

But for all its popularity, the concept of nudging has its flaws which largely go unmentioned.

Behavioral economics has gained plenty of traction in the past few decades. The concept of “nudging”—popularized in the 2008 bestselling book Nudge: Improving Decisions about Health, Wealth and Happiness by Richard Thaler and Cass Sunstein—is well known in the political sphere and even to non-economic students. With Thaler being awarded the 2017 Nobel Prize in Economics and Sunstein running a major regulatory unit in the Obama administration, it most definitely can be said that behavioral economics has successfully permeated the mainstream of the economics profession.

But for all its popularity, the concept of nudging has its flaws which largely go unmentioned. To explain why, I’ll first briefly describe the foundations of behavioral economics.

What Is Behavioral Economics?

Behavioral economics is a blending of the disciplines of psychology and economics. Its foundation is built directly on its rejection of the way mainstream economics treats the individual. Mainstream neoclassical economics assumes man as acting based on perfect information, possessing rational preferences, and being utility-maximizers. In other words, man (otherwise referred to as homo economicus) acts as if they possess full common information of all agents across the market.

Behavioral economists reject this hyper-rational model of the individual.

To be clear, neoclassical economists do not actually believe real-world individuals behave in such a robotic, rational manner. The purpose of the all-rational assumption of the economic actor, as Milton Friedman pointed out, is for conducting economic analysis. In other words, homo economicus is an analytical device. Such a method of doing economics is an emulation of the method of the natural sciences, known as logical positivism.

Behavioral economists reject this hyper-rational model of the individual. With the aid of insights from psychology, they argue that this conception of the way humans behave is wrong. It is wrong because man is irrational, uncertain, and plagued with biases and prejudices that do not enable them to act in the way neoclassical economists construe them to be (there is a panoply of such biases; see the image below). 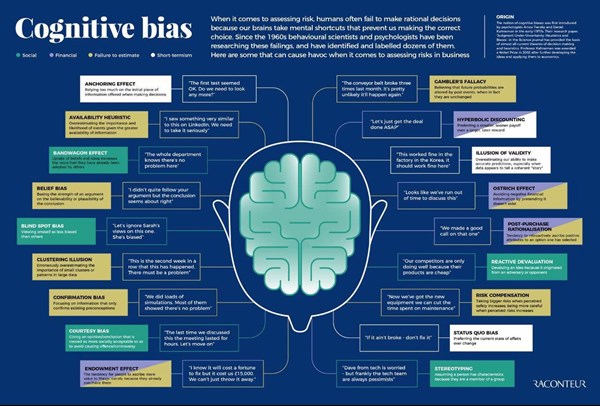 What Does This Have to Do with "Nudging"?

Behavioral economists follow that policymakers should play an important role in correcting these errors by guiding them towards the “right” decisions.

Apparent in this line of analytical reasoning is a normative argument that while economic actors do not behave hyper-rationally, they should still aim at doing so. In other words, the behavioral economics project is still largely hitched to the neoclassical conception. (This premise is highly questionable and has been criticized elsewhere here and here).

Proceeding from this premise, behavioral economists follow that policymakers can and should play an important role in correcting these errors by guiding them towards the “right” decisions. So, if saving more of your paycheck is seen to be a “right” decision, enrolling workers automatically in a savings program that they can opt out of later is seen as nudging them towards the optimal choice.

Similar to the welfare economics paradigm of the 20th century, individuals in behavioral economics suffer from a type of “decision-making failure” where their actions fail to match the supposedly rational standards. Hence the need for correction.

How Do We Know What's "Right"?

But a fatal error lies in thinking that we can so quickly leapfrog to the proposed solution that governments should set up “nudge units” to guide consumers into “correct” decision-making.

To begin with, such a proposed solution itself is vulnerable to two potential problems. Firstly, policymakers suffer from knowledge problems. It is exceedingly easy to say that policymakers should nudge smokers into kicking the habit or villagers in third-world slums into getting a measles vaccination. It is easy because we know that there is overwhelmingly strong scientific evidence that cigarettes are bad for you, and that measles can be fatal if not inoculated against. It is, however, much harder (if not impossible) to nudge consumers when the correct or “educated” decision is contingent on unique and rapidly-changing circumstances of knowledge that policymakers do not possess.

Nudging policy—like all top-down policy—is construed as an aggregate applied to its targeted audience.

For instance, in a popular 2004 paper by Thaler & Benartzi, a savings program is concluded to be successful because it helps workers save more money when they are automatically enrolled for it (as opposed to when they have to actively enroll). But making prudent financial saving decisions and the methods by which to do so are dependent on a wide variety of factors that the authors do not take into account. People have different personal income levels and, even more drastically, different expenditure habits. They are immersed in different types of communities and cultural networks that have different institutional practices to cope with financial security. The types of availed economy-specific financial instruments by which savings can be invested (such as different types of bonds, gold or cryptocurrencies) drastically differ whether one is living in a metropolitan city or in a less-urban setting.

Treating consumers as the same by stripping them of their unique circumstances and traditions, then proceeding to “nudge” them runs the risk of not only pushing consumers into making decisions that may not be optimal for them but also creating “lock-in” effects that persist into the future when macroeconomic circumstances have changed. Nudging policy—like all top-down policy—is construed as an aggregate applied to its targeted audience. The most reasonably diverse “choice architecture” still underappreciates people’s use of local knowledge that is factored into their decision-making.

Regulators Are Not Robots

Secondly, political institutions are plagued by inefficiencies. Regulators that fill the nudge units are not perfect robots. They are humans, just as flawed and endowed with inherent biases and psychological heuristics as the very consumers they have set out to nudge. As M.D. Thomas details:

… the following biases that have specific significance for experts: (1) action bias, which is defined as a tendency to overact in the face of risk and uncertainty. (2) Motivated reasoning, which is a tendency to reach the conclusions we prefer for other reasons. (3) Focusing illusion, which is a bias that appears when experts consider the impact of one particular factor and overestimate its significance. (4) Affect heuristics, which suggest that our reasoning is to a great extent the product of our emotions, and (5) illusions of competence, which is overconfidence with respect to one’s own knowledge.

We are then faced with a conundrum: who will watch the Watchmen? Can we reasonably expect behavioral paternalists to not only understand people’s circumstances fully but also capably derive the utility gained for the person post-nudge than the poor individual can themselves? If behavioral paternalists are just as subject to biases, we should be skeptical of putting them in charge of producing nudge policy.

Structural inefficiencies that are present in the institutional context also cannot be discounted. They play a part in influencing the actions of those who are developing the nudge policies. Policymakers and state institutions are bound to certain key performance indicators that may pervert its original purpose or may favor certain corporations or donors that play a crucial role in the actual policymaking.

As Thomas puts it, there is a glaring gap of unequal analysis in the behavioral economics literature:

The literature on behavioral policy recommendations fundamentally assumes that cognitive limitations are asymmetric between market participants and policymakers. That assumption widens the scope for public policy interventions through regulation, legislation and guidance documents, as well as by agencies supplying expert advice to lawmakers and the judiciary.

Just like traditional market failure theorists of the 20th century, behavioral economists commit the similar Nirvana fallacy of assuming that nudge units and their bureaucrats will operate seamlessly and efficiently. But such an assumption is unwarranted. Behavioral economics needs a comparative institutional analysis; it lacks its own “Public Choice” revolution.

Intervention Is Always a Risk

Lastly, is it safe for us to assume that regulators can succeed in shaping consumer behavior—the fundamental goal of nudging policy? Such behavioral policies have typically been an arrow in the regulator’s quiver long before the paradigm of behavioral economics was popular.

Pointing out the “deficiencies” of the status quo does not immediately imply that a policymaker needs to intervene and “correct” it.

Pointing out the supposed “deficiencies” of the status quo does not immediately imply that a policymaker needs to intervene and “correct” it unless said intervention is proven to be superior to the status quo. That is not to say that there are no valuable lessons we can glean from behavioral economics. But we should most certainly remain skeptical of nudging, especially when its advocates are eager to deploy it in elaborate forms.

Donovan Choy is a research fellow at the Adam Smith Center Singapore and coauthor of Liberalism Unveiled. You can contact him at [email protected]