No, It’s Actually the Rich Who Deserve a Tax Break

The truth of the matter is that high-earners in America pay well beyond their fair share.

America is run by the 1%; the economy is rigged; the deck has been stacked against you. These are the tired refrains of progressive champions who wish to incite class conflict for sake of achieving economic equity. The progressive paradigm is entirely predicated on the notion that the rich are taking more than they deserve and giving back less than they should. At the center of this is a tax code that has been designed by and for the rich at the expense of the rest of the country.

The truth of the matter is that high-earners in America pay well beyond their fair share. More specifically, America has the most progressive tax system in the developed world. This certainly doesn’t comport with the anecdotes and infographics your friends share on Facebook. After all, don’t the rich pay upwards of 60% of their earnings in Europe’s most glorious utopias?

America Has the Most Progressive Tax Code

It is indeed true that the rich are generally subject to steeper tax rates in most European countries (though not dramatically steeper if you account for the union of state and federal income taxes). But while Europe’s wealthiest citizens tend to have higher taxes than their American counterparts, Europe’s middle classes are subject to way higher taxes than America’s middle class.

In technical terms, the ratio of the rich’s contribution to the tax pool to their share of national income is higher in the US than in European countries, e.g. Sweden, Germany, the UK, France, and so on. The Washington Post produced a fun graphic to illustrate this fun point (the figure relies on OECD data from 2008, before the expiration of the Bush tax cuts). 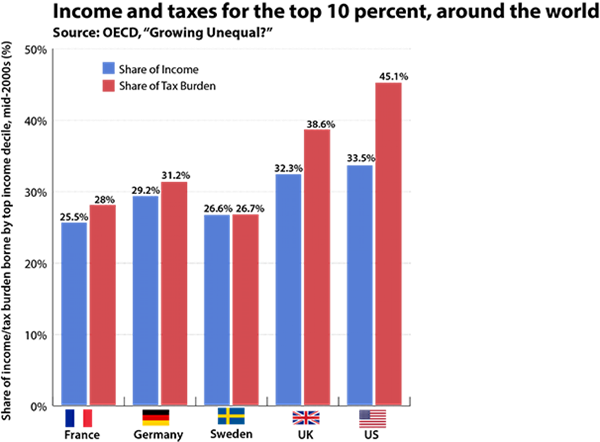 Similarly, this chart (below) demonstrates that the tax brackets in Sweden, Denmark, and Norway are effectively much more “flat” (i.e. less progressive) than those in the US. The top tax rate in the US kicks in at 8.5 times the average income, whereas someone making 1.5 times the average income in Sweden pays the maximum rate. Could you imagine the outrage if the top tax bracket in the US were made to begin at 80,000 dollars a year? Well, that’s how they do it in Europe. 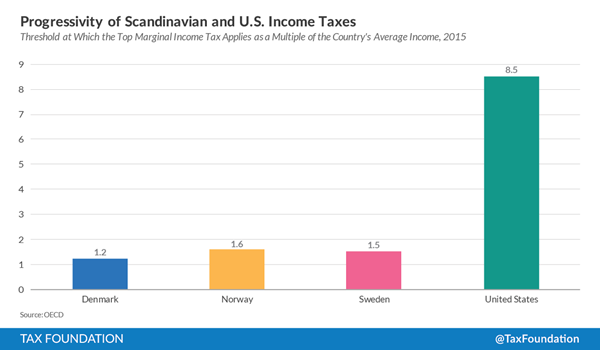 Put it all together, and America’s rich are carrying a significantly greater share of the tax burden than they’d be made to elsewhere. The notion that the rich in America don’t pay their fair share is an urban legend – pure and simple.

Note that neither I nor the data I refer to dismiss that there are some affluent individuals who take advantage of the tax system by filing a significant portion of their labor-based income as capital gains and thus pay a lower effective rate. But this applies to a minority among the wealthy and does not change the fact that, as a group, high-earners are disproportionately penalized by the taxman. Advocating for higher taxes on all of the rich is logically equivalent to slashing food stamp benefits across the board because a small percentage of recipients are gaming the system – it’s collective punishment.

US public spending per capita is higher than that in Canada, the UK, and Australia.

Now that we’ve decisively put that matter to rest, let’s tackle the myth that there was once a 91% levy on top earnings in America. To start, post-WWII federal revenues have always been between 15-20% of overall GDP. There was never a progressive golden age of Denmark-esque tax revenues, doomed to be upended by a Reagan-led succession of Republicans (it was actually JFK who blew the first hole in the 91% rate). The US government has never been bigger, more redistributive, or more “progressively” punitive than it is today.

Second, the rich were paying about as much in income taxes under the 91% rate as they are now. Peter Schiff writes in the Wall Street Journal that in 1958, the top 3% of earners took in 14.7% of national income and contributed 29.2% of federal income tax revenues. In 2010, those numbers were 27.2% and 51% respectively – the ratio is practically unchanged. What was different however was that the bottom half of earners paid much more in taxes than they do today; so the system was more similar to tax regimes in Europe in that respect.

Still, we demand more from the rich so that we may bankroll our very own Euro-style welfare programs. I’m here to tell you that, regardless of everything I’ve written thus far, the government already has more than enough money to pay for all of the goodies on a Europhile’s wishlist.

Indeed, US public spending per capita is higher than that in Canada, the UK, and Australia – even after accounting for our relatively extravagant military expenditures. That is, governments in the rest of the Anglosphere maintain considerable welfare states – including universal healthcare, heavily subsidized higher education, parental leave, etc. – while spending less taxpayer dollars per head than the US government currently does.

US government bodies have obscene amounts of cash, but they spend it abysmally.

The truth of the matter is that it isn’t greedy bankers and basketball players standing between America and socialized healthcare. Mark Cuban and your family physician haven’t doomed our entitlement programs to inevitable insolvency. US government bodies have obscene amounts of cash at their disposal, but they spend it abysmally – by both right- and left-wing standards.

Yet every effort to free up cash in the public coffers is invariably met by screeches from this or that interest group, claiming that Paul Ryan’s latest move will disproportionately affect people in this or that vulnerable community. If you’re truly interested in passing this season’s must-have social policies, then stop fixating on the rich and start demanding fiscal discipline. Let’s sort out the government’s negligent spending habits before grabbing our pitchforks and descending upon the nearest Whole Foods.

At any rate, the American tax system is undoubtedly progressive enough as it is. Calls to raise income taxes on the rich are rooted in ignorance or envy. If we want to be more forward-thinking and European in our tax scheming, there are really only two ways to go about it: either a tax-cut for the rich, or a tax-hike for the rest of the country. Anything else would be very un-European of us, and thus in poor taste.