She must not understand that the entire world was mired in poverty before free markets took hold. 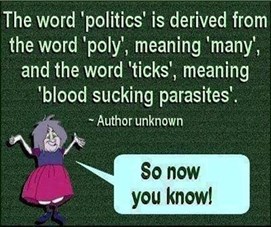 But not all politicians fit in that box. There are also evil politicians in the world. Maduro in Venezuela would be a prime example, and you can add the dictators of North Korea, Cuba, and other hellholes to that list.

There are even a few admirable politicians, though that’s a very limited list.

But there’s also another category, at least in my mind. These are the ones who behave conventionally but say things that really blur the line between foolish and despicable. For lack of a better phrase, these are the morally blind officials. 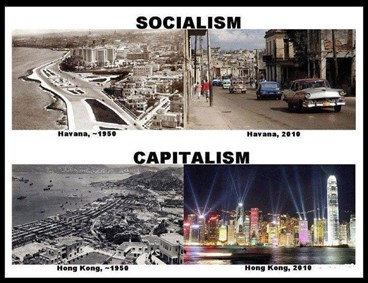 The politicians who eulogized Cuban dictator Fidel Castro belong in this group.

Another example would be Michael Higgins, the President of Ireland, who urged a return to “collective values” and condemned the “Celtic Tiger” era for being too individualistic and selfish – even though that was the period when the people of Ireland enjoyed both rapid income growth and huge improvement in quality-of-life measures ranging from central heating to infant mortality.

Now I have another politician who belongs in this special category.

The new Prime Minister of New Zealand just demonstrated her profound ignorance of world history and New Zealand history by declaring that capitalism is “a blatant failure.”

New Zealand’s new prime minister called capitalism a “blatant failure”, before citing levels of homelessness and low wages as evidence that “the market has failed” her country’s poor. Jacinda Ardern, who is to become the nation’s youngest leader since 1856, said measures used to gauge economic success “have to change” to take into account “people’s ability to actually have a meaningful life”. …Ms Ardern has pledged her government will increase the minimum wage, write child poverty reduction targets into law, and build thousands of affordable homes. …The Labour leader said her government would judge economic success on more than measures such as GDP.

She sounds like a clueless college student, regurgitating some nonsense she heard in a sociology class. Is she not aware that capitalism is the only successful strategy for reducing poverty? Does she not understand that the entire world was mired in poverty before free markets took hold? 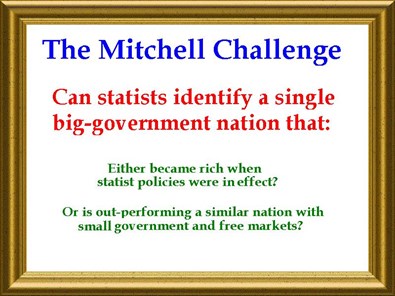 Is she unaware that horrible material deprivation in countries such as China and India only fell after those nations opened themselves to some economic liberalization?

I wish some journalist would ask her a version of my two-question challenge. Or, better yet, have Bono talk with her about how to genuinely help poor people. Heck, let’s sign her up for an economic history class with Deirdre McCloskey.

She reminds me of Pope Francis, who has a knee-jerk view that capitalism is bad. I’ve explained why those views are wrong, though I’d first recommend reading what Walter Williams and Thomas Sowell wrote on the matter.

By the way, I don’t know enough to comment on homelessness and child poverty in New Zealand, but if their welfare state is anything like the mess in the United States, I wouldn’t be surprised to learn that the government is actually subsidizing destitution and dependency.

But even if that’s not the case, Ms. Ardern is condemning capitalism because it doesn’t solve every problem in society. That might be a fair assertion, except the alternatives to capitalism have never solved any problem. Indeed, the various forms of statism are the cause of much misery around the world.

For what it’s worth, I would not be agitated if she simply had made a conventional left-of-center argument about being willing to accept less growth to get additional redistribution because the benefits of capitalism aren’t “equally shared,” or something like that. That’s the standard equity-vs-efficiency debate. But she apparently doesn’t have the depth of knowledge for that discussion.

The bottom line is that New Zealand is now governed by a politician who doesn’t know what she doesn’t know. That doesn’t mean she’ll be any worse than the standard elected official, but I’m not overflowing with optimism that New Zealand will continue to be ranked near the top by Economic Freedom of the World.

By the way, I appeared on New Zealand TV earlier this month while in the country for a speech. But we talked about America’s top politician (and his worrisome protectionist mindset) rather than what’s happening in Kiwi-land.

Though I did mention that New Zealand made great progress because of sweeping economic reforms in the 1980s and 1990s. Hopefully, Ms. Ardern won’t have much success in moving her country back in the wrong direction.

P.S. Obama came close to joining the morally blind club when he suggested we could learn from communism. And Bernie Sanders deserves to be in that club but may belong in an even worse category.