Beyond Commutative But Not “Social” Justice

Classical liberal and libertarian thinkers have moved boldly beyond what Adam Smith calls “mere justice," that is, the grammar-like justice of not messing with other people’s stuff.

Classical liberal and libertarian thinkers such as John Tomasi (2012) and others who blog at Bleeding Heart Libertarians: Free Markets and Social Justice (link) have moved boldly beyond what Adam Smith calls “mere justice” (TMS 82.9), that is, the grammar-like justice of not messing with other people’s stuff. Smith also called it commutative justice (269-270.10). Like Tomasi and the others, Adam Smith too affirmed justice beyond commutative, and I do as well. Classical liberals need to see beyond commutative.

Tomasi and others do so by talking “social justice,” a move about which my feelings are mixed. I applaud the stepping beyond commutative. As for doing so by talking “social justice,” I also say this: If one dwells within communities in which the acceptation of “social justice” is so strong that deviating from it would reduce the good one can do, then by all means, go along. A discourser’s discourse lives within the communities he converses with and competes within, and there is virtue in respecting and acquiescing to their conventional rules and practices, even if the discourser laments that those rules and practices that are convention are convention. We may applaud people for talking a certain way even though we reject our talking that way, because their situations are not ours.

Commutative justice is not messing with other people’s stuff, namely, their person, property, and the promises due to them as by consent and contract. Distributive justice is making a becoming use of what is your own. Estimative justice is estimating objects properly, including pursuing them and treating them with corresponding ardor.

We may say that you should always make a becoming use of your own, and that you should always estimate objects properly. But not messing with other people’s stuff is not just 100 percent of the time. There are exceptions. In private life the presumption is super strong, but it can be trumped: That is, messing with other people’s stuff can, in unusual circumstances, be a becoming use of one’s own. Freezing and lost in the snow-covered woods, you rightly, perhaps, break into the cabin.

Justice is always a matter of the individual’s duty in his actions.

I favor moving beyond one. But two will not do. We need to jump from one to three, commutative, distributive, and estimative.

Justice is always a matter of the individual’s duty in his actions. Each of the three justices entails the specification of an action, in a broad sense to include maintaining habits, sentiments, interpretations, beliefs, purposes, and so on. An action implies an actor. Thus, all three entail specification of a Jim who did X. The justices then ask, respectively, did Jim, in doing X, (1) mess with anyone’s stuff, (2) make a becoming use of what is Jim’s own, (3) properly estimate pertinent objects? The first is a matter of grammar, but distributive and estimative are like aesthetics and involve a contextual sense of propriety, above being praiseworthy, below blameworthy.

Distributive and estimative necessarily involve vagueness in certain of their facets, such as “becoming.” In fact, Smith described their rules as “loose, vague, and indeterminate” (TMS 175.11, 327.1). But other facets are precise and accurate. Each demands the logic of actor and action. Each demands specification of who is acting and what action is being taken, and regard for the context of that action, including the relevant alternatives. Estimative justice demands specification of the object being estimated. Such demands give distributive and estimative more structure, coherence, and discipline than is found in discourse about “social” or “general” justice.

If one justice swallows another, it is estimative that swallows up both distributive and commutative.

In the three places in which Smith explicitly writes of “distributive justice,” it is associated with: “proper beneficence,” “charity or generosity,” “the social virtues” (269.10), “the social and beneficent Virtues” (Fragment on justice, TMS, 390), giving praise that is due, and again giving charity (in examples in LJ(A), 9). It seems that the objects of distributive justice attach to a set of persons; distributive would not apply to a poem, a picture, or an idea abstracted from any particular set of persons.

Moreover, to say that we have a supply of esteem points to distribute to the objects of the world usually works poorly, even as loose metaphor. Such a metaphor would need some notion of the budget constraint on esteem points, as well as some sense of the relevant objects over which such points are to be distributed. But, for estimative, we are talking about all manner of objects, including ideas. But ideas are not merely large in number, they are innumerable. As interpretative creatures, we create ideas as we go, such that one idea soon gives rise to others.

Ideas and sentiments form concatenations, and a single tweak or addition might render the larger concatenation deserving of much different estimation. The tweak or addition makes for a new and distinct concatenation. Whereas distributive has a sense of confronting a robust set of objects—people, particularly those “connected” to us (269.10)—over which one is to distribute one’s social resources, with estimative we do not have much sense of a complete set of objects. 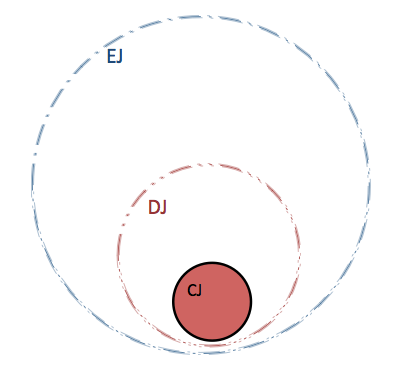 What’s more, the inversing move which we applied to commutative justice, to create a claim called liberty, is a move that naturally accedes as well to distributive justice. The resultant claims are much messier than those of liberty, because the rules upon which the inversion occurs are loose, vague, and indeterminate. But the move is essential nonetheless. Steve may justly talk of having a loose sort of claim, once termed an “imperfect” right, on his friend Jim’s time, attention, or other resources, even though not by promise or contract—that is, not by commutative justice.

Classical liberals and libertarians are right to emphasize commutative justice and its flipside, liberty.

Consider a public policy issue—say, the federal prohibition on payments for organs, such as kidneys, as compared to liberalization. Bleeding-heart libertarians are apt to say that such prohibition is socially unjust. If we understand “social justice” to mean distributive and/or estimative justice, then I’d certainly be simpatico with the drift of that social-justice claim. But I’d rather say this: The prohibition is, first of all, a violation of commutative justice, in that it has the government messing with other people’s stuff, by initiating coercion (including threat thereof) against non-coercers, notably would-be kidney transactors. Second, one’s failing to oppose the prohibition would be estimatively unjust, in that that would be overestimating prohibition relative to the alternative (liberalization); likewise we could say that one unjustly estimates liberalization by estimating it too low.

What about government and distributive justice? The matter requires us to distinguish between government-sector organizations and properties, such as universities, parks, streets, and so on, and government qua governor, jural superior, who tampers with commutative justice. We may speak of a government-sector university making a becoming use of its own, or of the university administration’s distributive justice. But for the governor, I suggest that qua jural superior the governor has nothing; qua jural superior there is no “own” to make a becoming use of. Such proposition is a subtle matter, and it relates to questions of configuration of ownership within the polity. But in my view, the justice of the jural superior’s action is only commutative and estimative; distributive does not apply.

I think it is important to embrace Smith’s threefold understanding of justice. Respecting the logic of each of the three justices helps us to see more clearly what we are talking about and where we agree and disagree. Such clarity will help to show where vagueness ineluctably inheres, why it does, and just how sprawling and multi-perspectival and challenging that vagueness is. Thus, Smith’s threefold understanding conciliates us to certain common understandings and teaches us humility in advancing assertions about the loose, vague, and indeterminate facets. It teaches us to refrain from calling loudly in matters of justice beyond commutative justice. We sometimes find Smith in The Wealth of Nations calling loudly against injustice (WN 157.59, 326.100, 530.16, 826.6), but in all such cases the injustice involves the violation of commutative justice. Whenever the justice talk does not involve his objecting to a violation of commutative justice, he proffers such talk coolly (e.g., WN 815.4-5, 827.7, 834.20, 944.88, 946.92).

Smith’s teachings and example guide us on how to talk justice beyond commutative: Formulate it as either distributive or estimative—not an admixture of the two—and proffer it coolly.

[1] The notation TMS 82.9 means page 82, paragraph 9 of the edition of The Theory of Moral Sentiments listed in the References.

Daniel Klein is professor of economics and JIN Chair at the Mercatus Center at George Mason University, and associate fellow at the Ratio Institute (Stockholm). At GMU he leads a program in Adam Smith. He is the author of Knowledge and Coordination: A Liberal Interpretation and editor of Econ Journal Watch.