Vice President Joe Biden recently became an unpopular million-dollar man when news broke that U.S. taxpayers shelled out more than a million dollars to cover his entourage’s cost for staying two nights each in London and in Paris. Stung a bit by the criticism that followed, the White House was already back-pedaling to void earlier notices that the 135-year-old Easter Egg Roll could be canceled because of deficits.

But while the Easter Bunny may have scowled at all this, things were worse elsewhere. It was the week that federal workers were being furloughed and agencies across the government were trimming their sails.

Scarcity had reared its ugly head everywhere, it seemed, but for White House travel and entertainment.

With a little bit of digging, diligent reporters learned that when traveling overseas Biden requires more than 100 aids and agents, that some of them precede and remain after him, and that the $1 million charge really covered lots of rooms, food, and travel.

There is a vast difference between accommodations and prices at the Paris Intercontinental, where the Biden team chooses to stay, and the likes of the Best Western France where most of us ordinary souls hang out. But we do have to grant that, when doing the nation’s business, the vice president requires extensive communications hook-ups, Secret Service protection, and other sophisticated services that we would never even imagine.

Recognizing this only dampens the smoldering rage some people feel when thinking about how freely Washington spends taxpayer money—how hard it is for us to earn, how difficult it seems for government to cut back, and how easy it is to fall into past habits each budget year.

How long does it take the average American to earn enough to pay for Biden’s much-celebrated trip? Here’s one way to think about it: According to Census Bureau studies, the average lifetime earnings of an American worker with a high school diploma are $1 million. For a person with a bachelor’s degree, it is $2.1 million.

Biden’s trip cost what a person with a high school education earns in a lifetime.

When asked about Biden’s expensive trip, State Department officials responded with details about the size of the entourage and indicated that this was “nothing out of the ordinary.” It is common practice now and has been with past administrations.

But that is just the point. Common practice has to change.

Is it possible? Of course it is. After all, we are adaptable human beings.

Consider the accompanying chart showing federal spending per capita expressed in real dollars (adjusted for inflation) from 1945 forward. Notice that there are two administrations when spending per capita does not rise: The Eisenhower and Clinton years tell us government can go on without spending increasing amounts of taxpayer money each year. And note the difference in the height of the bars for the Clinton years versus the Obama years. The annual level of spending per person has risen from roughly $7,000 to $10,000, which is more than a 40 percent increase. 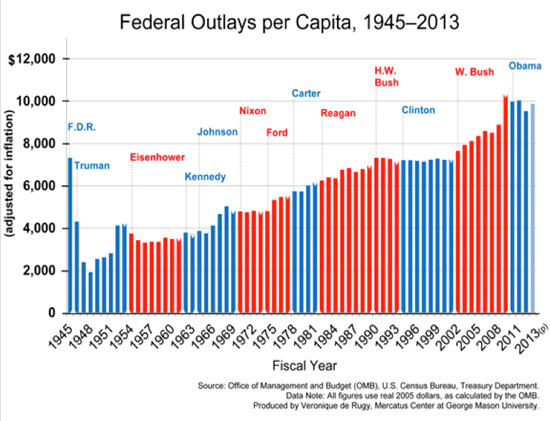 Yes, there is the cost of fighting two wars captured in the increase, and higher costs of providing national security, along with increased spending on prescription drugs and healthcare. But can we work our way back to the conservative Clinton years?  And how?

Amity Shlaes describes how cuts can be made in her top-selling 2013 biography of Calvin Coolidge. The book, Coolidge, tells a story of times similar to our own, a time of high World War I deficits, a time when returning war veterans were aching for federal assistance in rebuilding their lives, a time of high wartime taxes that still seemed necessary, and a time when budget cuts were viewed as impossible, if not immoral. All this was in the mix when Coolidge assumed leadership following the sudden death of President Warren Harding in 1923.

How did Coolidge and his colleagues bring down the spending? They did it by routinely, continuously, and thoroughly focusing on the cost of items small and large found in agency budgets. Everything from pencils, to rent, to salaries, to proposed state bailouts, to White House parties and meals was scrutinized and managed. The default response to requests for money was no instead of yes.

When Coolidge departed office in 1929, he left a smaller federal government, a nation with lower taxes, and a budget headed to surplus.

Of course that was then and this is now. But “the more things change, the more they are the same.” Doing something about deficits requires a moral commitment to the task and a love of the idea that the nation’s wealth can be increased when the federal fisc is soundly managed.

So what about the million-dollar man, the Easter Bunny, and the expensive Paris and London trips? We should not spend too much time fretting about one week’s news story. We should focus instead on reversing a 10-year trend of increased spending and then nurturing a culture of responsibility that commits future administrations to containing government growth.