Unemployment Benefits Are Prolonging the Pain

Five years after the economy tanked, unemployment remains high. There are numerous culprits, but one deserves special attention: unemployment benefits. In 2010, I examined these, on a theoretical level, in "The Consequences of Extending Unemployment Benefits," arguing that unemployment benefits weaken the incentives for unemployed persons to find and accept work. Three years on, experience has provided evidence to support standard economic theory.

The evidence centers on the Beveridge curve, a little-known measure of the relation between job-vacancy and unemployment rates. It’s named after the English social democrat and eugenicist Sir William Beveridge, who published a series of influential reports on employment and social insurance in the United Kingdom. Most of Beveridge’s work was done before and during the Second World War. After the Second World War, economists L. A. Dicks-Mireaux and J. C. Dow formalized the vacancy-unemployment relation as the Beveridge curve.

The Beveridge curve has been fairly stable as an empirical matter. But of late, there has been a fundamental shift: Job-vacancy rates have been relatively high in the past several years, given the level of unemployment. According to one recent study, the rate of unfilled jobs is at a level that would normally imply 4.9 percent unemployment. So the Beveridge curve appears to have shifted by 2.9 percent.

Empirically, increases in unemployment are associated with decreases in the rate of job vacancies. The logic behind the Beveridge curve is that relatively large numbers of unemployed people will fill new job openings rapidly. Some jobs will remain unfilled even with high unemployment rates because of mismatches between the types of jobs and the skills of available workers, and because of imperfect information about jobs. However, the number of simple mismatches is limited in a nation with a labor force of over 150 million: Large nations offer a great variety of employment. Besides, people can search, retrain, and even move to find work over time. Some workers (and some employers) are also “fussy” or otherwise hesitant about agreeing to labor contracts, and such hesitation will raise job-vacancy rates relative to unemployment rates.

Conversely, as the job market tightens and the labor market reaches bottlenecks, employers will have difficulty filling new positions, and the unfilled job rate will rise relative to the unemployment rate.

The following chart of the Beveridge curve was recently published in The New York Times. 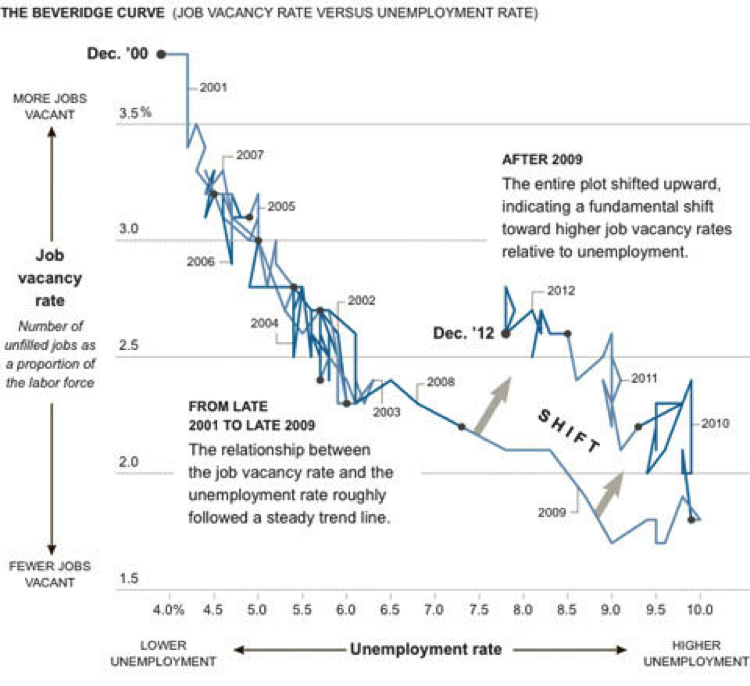 Empirically, there has been an abnormally high level of job vacancies for several years. In fact, there appears to be a new Beveridge curve, parallel to the older one. How can we explain this fact?

Another explanation for the high job-vacancy rate is that employers have been cautious about hiring in recent years. The Affordable Care Act (Obamacare) and the Dodd-Frank Consumer Protection Act have raised expected regulatory costs. They’ve also helped increase uncertainty about the future costs of regulations and taxes. With regulatory and tax costs going up along with uncertainty about their future levels, entrepreneurs have to be more cautious in their hiring practices. They want to be more confident in the productivity of new employees before agreeing to new labor contracts. This caution systematically raises job-vacancy rates.

The New York Times published a dissenting opinion not too long ago, however. Paul Krugman wrote:

As I see it, the whole structural/classical/Austrian/supply-side/whatever side of this debate basically believes that the problem lies in the labor market.… Some of them accept the notion that it’s because of downward nominal wage rigidity; more, I think, believe that workers are being encouraged to hold out for unsustainable wages by moocher-friendly programs like food stamps, unemployment benefits, disability insurance, and whatever. As regular readers know, I find this prima facie absurd—it’s essentially the claim that soup kitchens caused the Great Depression.

In other words, Krugman suggests that economists on my side of this debate are misguided and hard-hearted. Supposedly, we want to reduce worker incomes with wage reductions and benefit cuts, and this will backfire by “reducing aggregate demand.” Krugman thinks the Federal Reserve Bank should “increase expected inflation” to reduce real interest rates and stimulate private investment.

But it’s Krugman’s position that is prima facie absurd.

If inflation reduces interest rates, this action should also reduce real wages and incomes. Furthermore, any action that shifted the Beveridge curve back to its 2007 position would increase employment in existing unfilled jobs, and such an employment gain would increase earned incomes and production without a decline in wages. If Krugman was correct about weak aggregate demand causing unemployment, recent record-setting deficits and bank-reserve increases would have produced a stronger recovery. Unless one believes his “we should have spent more” line of defense, Krugman’s macroeconomic explanation is wrong. What about microeconomic explanations of elevated job-vacancy rates?

There are two subtle truths behind the Beveridge curve.

First, most people will react to money incentives rationally. Increased unemployment benefits weaken incentives to find work. Harsh rules and taxes will cause entrepreneurs to hesitate in hiring new employees.

Second, modern economies are complex systems. Krugman poses a false choice between demand-side and supply-side explanations of the recent shift in the Beveridge curve. There are some industries where demand for new employees is weak. There are some industries where the supply of potential laborers is restrained. Some industries may have weak labor supply and restrained demand simultaneously. The Obama administration isn’t helping, as its policies have left the American economy riddled with distorted and inefficient markets.

The main obstacles to realizing better economic conditions are the false beliefs in activist government policy as the catch-all solution to all economic problems. It turns out government policy is the primary cause of economic woes. Popular economists like Paul Krugman have considerable influence on public opinion, but logic and evidence work against their worldview.

The events of recent years are distressing. However, there are also opportunities in these events to discredit false prophets of activist government. Evidence against the demand-side economics espoused by Paul Krugman is mounting, and this theory has been discredited before. Rational analysis will discredit it again.